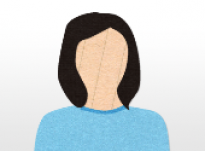 Brief Outline: Rachel, 16, recently went to see her doctor because she was worried that she was overweight. Although the doctor said her weight was average for her height according to the BMI (body mass index) chart, she still feels worried. Ethnic background: White other.
Background: See 'brief outline'.

Rachel, 16, recently went to see her doctor because she was worried that she was overweight. Although the doctor said her weight was average for her height according to the BMI (body mass index) chart, she still feels worried. Rachel thinks she might have gained weight because she hasn’t been exercising like she used to because she says she can’t be bothered. Rachel describes herself as average, but with muscular arms and legs, and she thinks she has a fat belly. She says she doesn’t want to be skinny but says her ideal body shape is thinner and more toned than she is now. Rachel says she hasn’t ever tried to lose weight and thinks she’s an average size because she has always been interested in exercise and quite active. During her time at school, Rachel says everyone was weighed in front of each other and this was something she felt uncomfortable about, because even though she was an average weight, she didn’t want people to know what it was because she sees it as a personal thing.
Rachel says she has a big appetite and although her mum does most of the shopping and cooking, she does get a choice in the things that she eats, subject to her mum’s budget. Rachel believes it’s important to be healthy and says she is planning to go back to the gym to improve her health and fitness. Rachel also thinks it’s important to do exercise because otherwise you can gain weight. She thinks the government could do things to make it easier for people to be healthy and avoid gaining weight, for example, by ensuring healthy foods like fruit and vegetables are cheaper than processed foods and by creating better, cheaper opportunities for exercise and increasing the amount of PE done in schools. She thinks that the media presents some sports (like football) as being just for men and that this discourages girls from getting involved. She thinks it might be difficult for people who are overweight to get involved in exercise because, unlike her, they aren’t particularly interested in sport, and they might feel embarrassed about running or cycling in public.
Although Rachel believes that personality is more important than looks, she also says she thinks you feel better in yourself if you take care of yourself and look as though you do.
Rachel is currently an administrative assistant and Chair of the Young People’s Advisory Group at the National Youth Advocacy Service.

Rachel thinks there is a difference between big and obese people and says that the causes are different.

Rachel thinks there is a difference between big and obese people and says that the causes are different.

View topic summary
SHOW TEXT VERSION
PRINT TRANSCRIPT
I think there is some people who are meant to be big, like there’s not, there’s people that look fat if you like and aren’t actually fat they are just like meant to be as big as they are, if they, if they went skinny they’d look atrocious kind of thing and that girl in my class she did everything to eat healthy and she just didn’t lose weight I think she was just meant to be that kind of weight kind of thing, she was a big baby, she was a big girl, she was just like big right the way through kind of thing she wasn’t meant to be a skinny person so not all people that you look at are fat, some of them are obese but some of them are just meant to be like that.
So are you saying there is a difference between sort of people that are meant to be kind of bigger?
Big.
and then…
And then people who are obese.
people who are…
Yeah.
obese?
Because obesity is brought on yourself I think, obesity is like when you’ve got eating, bad eating habits and you don’t exercise whereas just some big people just, maybe they do eat a bit more than say you and I but they just like, they are meant to be like quite big because they look kind of ill if they didn’t look that as big as they are.
So in those two groups of people then does, there’s like different causes for them being bigger?
Yeah, yeah.
Okay, so with the obese, obesity group they, it’s because they are?
Less active and they don’t really tend to watch what they eat.
Okay and then what about with the other group then?
The other group, I would say they weren’t active, they wouldn’t be as [noise] active as say, I’m just using myself as an example, but they would sort of, the wouldn’t be as active and they wouldn’t watch what they eat as much as other people but they do seem to do more about it than obese people.And I think obesity has got, there’s not always but sort of quite a few times there is a reason behind obesity like comfort eating and stuff like.

The Government needs to do more to encourage young people to take up sport and exercise.

The Government needs to do more to encourage young people to take up sport and exercise.

View topic summary
SHOW TEXT VERSION
PRINT TRANSCRIPT
Not really I think it’s up to the Government to like, offer more promotions and kind of things like, it even comes in with global warming kind of thing, how can somebody say walk and then get the bus when the bus costs ten times more than putting a bit of petrol in your car what takes you from door to door kind of thing?
And the gym prices are obviously, they are quite, I mean in the, in [place name] up to the age of seventeen you can get into the gym for free so it’s not bad but in other places I do know like, that it costs such, like quite a bitto become a member of a gym and things like that and I think like it would be city, I think is more influenced on young children and young people to day, so if you start life being obese then you’re probably gonna end life being obese kind of thing so I think the Government need to do more in terms of like lowering prices and things like that.
Previous Page
Next Page