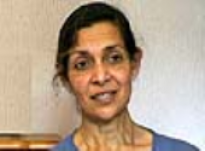 Age at interview: 50
Brief Outline: Parul is the mother of 17 year old Kiran. Kiran was diagnosed with EDNOS (Eating Disorder Not Otherwise Specified) aged 11. Parul says she has received little support from services.
Background: Parul is a divorced mother of one child aged 17. Ethnic background: Indian.

Parul is the mother of 17 year old Kiran. Kiran became aware of being overweight when he found it difficult to lift himself out of the swimming pool. Parul describes him as “a little podgy” at this time, but says he did not have any issues with food until later.
At the start of his condition, Kiran became very controlling over exactly which foods and brands he would eat. As his disorder progressed he would eat to excess , leading Parul to resort to locking food in her car boot. Eventually Kiran was diagnosed with EDNOS (Eating Disorder Not Otherwise Specified) aged 11. After he was discharged, he received CAT (Cognitive Analytic Therapy) as an outpatient at a local children’s hospital. Kiran has been admitted every year since then. Last year, Kiran’s weight fell to 35 kilos as a result of refeeding syndrome (self-starvation). Parul says this made Kiran act like he was delirious or “high” and he could have died. While Kiran was in hospital, Parul was only allowed to visit on a weekly basis and her visits were monitored.
As a result of his eating disorder, Kiran has lost a lot of his friends. His weight is now 47 kilos and Parul says he has to take a growth hormone because he hasn’t grown in 5 years. Parul is worried this will affect his ability to have children. Kiran has also been bedwetting since he developed his eating disorder. Parul thinks that Kiran’s eating disorder stems from a need to feel in control and to get attention, and this might stem from the (sometimes physical) conflict between her and his father. She also feels guilty because she is a dietitian and wonders if Kiran picked up his concerns about food from her.
Parul feels things have been difficult for her because Kiran can get quite angry with her and because other people don’t really understand eating disorders. Parul has felt frustrated because she and Kiran weren’t given much of a say in his care, and she found it difficult to find out about his treatment plan. Parul says she hasn’t had much support from services. Although they managed to get his weight up, Parul doesn’t think they have successfully treated Kiran' she’s disappointed that they haven’t taught him how to manage stress or his temper. Parul also says services haven’t been sensitive to their cultural needs' for example, Kiran wasn’t allowed home to celebrate Diwali, but Parul was invited to a session on “How to Cope with Christmas” – even though she doesn’t celebrate it. Parul also had some serious concerns about how he was being treated when he was an inpatient. Eventually Parul got an advocate for her son. Fortunately, Parul has had a lot of support from her work colleagues and from another mother whose child has an eating disorder.
Kiran still gets very touchy about food and stockpiles food that he doesn’t eat. He does a lot of exercise and has told his mum that he is really worried about becoming fat. Kiran has been doing a Saturday job this year and Parul says that’s been a really good focus for him.

Parul’s son who has EDNOS (Eating Disorder Not Otherwise Specified) won’t eat during the day and binge-eats low calorie foods at night.

Parul’s son who has EDNOS (Eating Disorder Not Otherwise Specified) won’t eat during the day and binge-eats low calorie foods at night.

View topic summary
SHOW TEXT VERSION
PRINT TRANSCRIPT
It was also difficult to find out whether he had an eating disorder or anorexia or bulimia but he was found to have EDNOS [Eating Disorder Not Otherwise Specified] which is neither. But he was anorexic during the day, come the evening it was like, well I haven’t actually eaten enough, and he would binge but binge on low calorie stuff. Very eating disordered, I had to buy yogurts from Tesco’s, Tesco’s brand, I would have to buy pasta from Asda’s because he knew the calorie content of that, he was into bagels that had to be from Sainsbury’s, it was just like, mad. I was hiding food, not hiding, locking food in my car boot because he was able to access anywhere else, he would go through punnets of tomatoes and punnets of strawberries, pull out cold frozen food from the freezer and eat that. But this would be at night and then we ended up with bedwetting as well.
And gaining weight is a real struggle. Gained a kilo, no, yeah a kilo in a week, but that’s like a constant reminder, he could get a kilo every day if he chose to, but like he’s gone today to work, he would have walked about half a mile, maybe, but he would’ve power walked it, and he carries extra stuff with him, breakfast would have been nothing. I tend to get him Fortisips and things, supplements now to take to school instead of milk, because I know he won’t have it, so at least I know he’s getting 300 calories. Real struggle, and even at night we eat a meal, and it has to be, although we’re supposed to eat at a quarter to eight, we never start eating until 8 o’clock, three measly potatoes, I mean they’re just like 3 golf balls, the sweet, for the last 2 or 3 weeks Mueller Light has been his kind of like the protein source with a small bit of cabbage or broccoli. And that’s his dinner, it’s like, and if I say anything he gets very, very aggressive, I think 5 years down and I’m getting to a stage why I can’t be bothered anymore.
Previous Page
Next Page