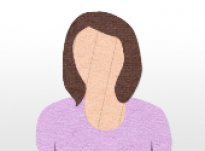 Age at interview: 17
Brief Outline: Lisa, 17, describes herself as slim. She worries about her father's health since he was diagnosed with type 2 diabetes. Ethnic background: White British.
Background: See 'brief outline'.

Lisa, 17, describes herself as slim, although she’s noticed that she’s recently put on a little weight. She thinks she’s started to gain weight as she’s got older, because before she could eat what she wanted and not put any weight on. Lisa says she’s worried about putting weight on because she thinks it would be hard to lose it again.
Lisa says she sometimes feels jealous of celebrities’ figures because they look so perfect and thinks this can influence girls to stop eating. She thinks that it’s easy for people with lots of money (e.g. celebrities) to lose weight because they have the money hire a personal trainer or a chef. She thinks healthy food is expensive and says it’s much cheaper and quicker to buy and cook a pizza.
Lisa’s mum does most of the shopping and cooking in her house. Lisa says that because her mum is on a diet, she doesn’t buy fatty foods when she goes shopping. Lisa worries about her father who has just been diagnosed with type 2 diabetes. Although he’s lost weight, Lisa says she worries he might put the weight back on because of his diet. Lisa isn’t worried about her own health though.

Lisa is worried about her Dad having a heart attack due to excess weight and high blood pressure and Amy says that her uncle changed his diet after a health scare and feels better.

Lisa is worried about her Dad having a heart attack due to excess weight and high blood pressure and Amy says that her uncle changed his diet after a health scare and feels better.

What about health? Do you think it affects your health?

Amy: Yes, it would affect your health. Like high blood pressure, cholesterol, heart, you could have heart disease.

Lisa: Yes. It’s like my dad, he’s got, you know, diabetes, but the type 2 one, not where you have to, and he’s got high blood pressure, yes. But that’s like, he’s a lorry driver, yeah, so he sits, he starts work at like 12 and he finishes at like 12, 1. He’s sitting down all day.
Amy: Really?
Lisa: It’s so bad. And I get so, I do get so worried about him. He’s like, he is obese, yes, but he’s not like massive. You probably wouldn’t think he was, but his like, you know, like BMI is over that. And I just think, “Oh, my God.” And I just think, “One of thes…” I know it sounds really horrible, but I just think, “One of these days, he’s going to have a heart attack and collapse or something.” Because he’s like, he’s quite bad though. But he does try like, since he’s been to the doctor’s and that he’s like, he has swapped it around and that. Like, he’s, you can tell he’s lost weight, but then sometimes you just think, “Oh, no, you’ve put it all back on.” It’s like he has salad every day for his lunch, like puts it in a lunchbox, brings it to work with him and he has that every day. But then when it comes to the weekend, he’ll like drink a few beers and then like get a pizza, or for dinner he’ll have like chips and sausages. And it’s just like, “What’s the point in that?” You’ve got to balance it out, ain’t you?
Amy: And my uncle had a heart attack last year and he, like he always suffered with high blood pressure. So I think that was something to do with it. But now he’s like, after that he’s like changed his diet, his routine and everything. Because he was like a car mechanic. But like, he’s like lost loads of weight now. But I think he’s like, he’s like normal, he’s like on a good diet now.
Previous Page
Next Page