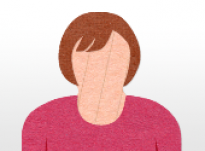 Age at interview: 19
Brief Outline: Jess, 19, is studying nutrition at university. She lost 5 stone with Slimming World and also became one of their consultants, running her own group. Ethnic background: White British.
Background: See 'brief outline'.

Jess, 19, says she’s always been big and was bullied about it in primary school – she remembers she developed faster than the other kids so she stood out. Jess says her period started when she was 9, and she reckons her body has been the same since then. When she went to secondary she got a lot of attention from older boys. Until recently Jess says has disliked eating in front of other people because she’s worried they would think that she was eating the kind of food or portion sizes that were making her fat. When she was at secondary school she tried to eat the same things as her friends to try to fit in.
Jess remembers that before she left secondary school she and her friends were a similar, normal size, but that she gained weight after leaving. She puts this down to using a car instead of walking and also going out regularly and drinking alcohol. Jess joined Slimming World (where she became one of their consultants) and lost five stone, but has put the weight back on since she met her new boyfriend. She thinks slimming groups don’t tackle the underlying unhappiness that causes people to eat. She says when she was a consultant, she would ask the group to identify tips to share with each other about what they can do if they’re feeling down instead of eating (e.g. have a bath, get a massage).
Jess is studying nutrition at university and has learnt a lot about the nutritional value of different foods and says this has really influenced her to make a change to her diet. She believes that people should eat what they want – as well five fruit and vegetables per day – but avoid eating more than they need. Jess points out that it’s not just about weight, but about people’s insides. She says she’s passionate about educating parents to ensure that children have access to the right nutrition and avoid becoming obese. Jess believes it is parents’ responsibility to feed their children healthy food and says her own mum was responsible for the portion sizes she ate as a child. She puts her weight as a child down to portion sizes because she said she didn’t eat junk food.
Jess is unhappy about her weight and her body, especially since she gained extra weight over the Christmas period which has given her stretch marks. She’s sad that she can’t wear the clothes that she wants but is determined to lose weight so that she can feel comfortable wearing a bikini on her holiday. Jess says she doesn’t mind what size she is as long it her clothes fit nicely, but she would ideally like to be a size 10-12 like when she was 17. To lose weight, Jess says she’s trying not to eat too much, to base all meals around fruit and vegetables and to drink more water. Jess is a member of a gym, but is worried about going back because she hasn’t been for months.

Jess thinks that people should eat what they want but should avoid food that has little or no...

Jess thinks that people should eat what they want but should avoid food that has little or no...

View topic summary
SHOW TEXT VERSION
PRINT TRANSCRIPT
I think people should eat what they want basically. But don’t eat more than you need. And try to have 5-a-day and do some kind of exercise even if it’s just running up and down stairs or... That’s what I think people should do [laugh] as hard as it might be. I just think people should make better choices like if you’re having, if you go out and have like salmon and chips usually why not have salmon and jacket potato and salad because you always get that option as well. Or if you want to have chips then don’t have a dessert and have some fruit.
And do you think because sometimes, you know, as you say people don’t always make those choices do they? And why do you think that is?
[Sigh] I don’t know [laugh]. Because it, it supposedly tastes nicer and I think it. I think that if you, your palate’s accustomed to eating that kind of food then no other kind of food hits that, hits that spot like that does. And I think you’ve got to go at it strongly for a couple of weeks until you start thinking actually that tastes like fat and I don’t want to eat pure fat.
Do you think there are other things that might sort of make it difficult for people to make certain kinds of choices?
I think there’s, there’s loads of difficulties for people like whether it be cost or whatever but if you’re determined and if you want a healthy lifestyle and. It’s not just about body weight, it’s about your insides as well I think. And how you feel in your brain and I think, I think that we need to start looking or targeting people and looking at why is a ready meal so much cheaper than a packet of vegetables. And it just seems wrong and maybe try and get people to grow in their back garden or do something that helps people to get fresh, nice food again.
And well why do you think that, you know, like a frozen ready meal or whatever? Why do you think that’s cheaper than?
Because it’s full of rubbish.

Because it’s full of crap. Because it’s got no nutrient or nothing of value. it’s just got all, like sausages. It’s just got all fat pumped in them, disgusting pieces of meat that they just scrape off and I mean some of the stuff that you see that we have to look at on our course and you look at it and people say like, ‘I wouldn’t even feed my dog that. It’s disgusting’ [laugh].

View topic summary
SHOW TEXT VERSION
PRINT TRANSCRIPT
I didn’t want to eat in front of people. If people knew I were eating, I didn’t’t want people to know I were eating because then that’s why you find that gives you something to have a go so when. But when I came home I’d still be raiding cupboards and stuff. I do love food but I’m not really a sweet person. It’s more cheese and bread.
Savoury type stuff?
Yeah. And again more at night if I’m just sat around doing nothing. And I sit around in my bedroom and do nothing now so I’m not near the kitchen. Because if I sit here I’ll watch telly as soon as an advert comes on I wander off in there [laugh]. And I can’t. I don’t even know I’m doing it. I just do it.
Previous Page
Next Page