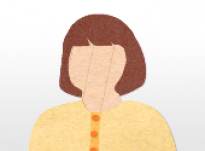 Brief Outline: Izzy is 13 and started attending a weight management programme and found it really helpful because everyone's in the same situation. Izzy is worried about developing health problems because of her weight. Ethnic background: White English.
Background: See 'brief outline'.

Izzy is 13 and started attending a weight management programme to help her improve her confidence, make friends and lose some weight. Izzy has found the programme really helpful because everyone’s in the same situation and they know how you feel. Izzy has made loads of new friends at the programme and feels much fitter and more confident.
Izzy says she’s been gaining weight since she had an operation when she was 5, but sometimes she feels she’s to blame for eating too much and comfort eating when she feels upset. She says that comfort eating actually makes her feel even worse sometimes.
Izzy was a bit worried about her weight because it made her feel different and sometimes she got bullied because of it. She says the bullying has got better now she’s a bit older and she just ignores bullies now. Izzy doesn’t really like to exercise in front of people or to get changed for PE in front of everyone else, so she changes in the toilets. When she does PE, she tries to wear clothes that cover her up as much as possible. Izzy is also worried about developing a heart problem or diabetes.
Izzy says she’s one of the only bigger kids at school but has lost half a stone since coming on the programme by eating better and being more active. Izzy doesn’t think it’s important to be thin, but that it is important not to stand out. She doesn’t enjoy going shopping with her friends because she’s embarrassed to try clothes on in case they see what size she takes. She says her size also makes it difficult for her to get fashionable clothes.
Izzy recommends that if other young people feel tempted to eat chocolate they should try to do something to distract them that’s more active, like playing on the Wii because it’s entertaining as well as fun.

Izzy gets changed in the toilets because she doesn't want people to look at her.

Izzy gets changed in the toilets because she doesn't want people to look at her.

View topic summary
SHOW TEXT VERSION
PRINT TRANSCRIPT
Like you feel really weird around people and you daren’t like exercise around them and you just daren’t do things around them because you feel really bad around them because they’re all like really small and you’re like big and then like in PE, I daren’t get changed in front of anybody. So I go into the toilets and get changed because I feel really weird with everybody looking at me when I’m getting changed. And then they’re all like really thin and they can have their belly button pierced but, I would like to have it done but I wouldn’t, if you know what I mean.
Yes and is there anyone else at school that does those sort of things, you know, going and getting changed in the toilets?
Not really no. It’s just like when it’s yes that’s the only time anybody else really goes into the toilet.
Right. But you do PE at school?
Yeah.
And do you mind, you don’t mind doing PE or?
I don’t mind doing PE as long as I’m covered up.
So what kind of things do you have to wear for PE?
We like have a T-shirt, it’s a quite a thin T-shirt. And you’re supposed to wear shorts but when it’s really cold weather like this we get to wear tracksuit bottoms and a coat, and I normally wear the tracksuit bottoms and a coat.

Joining a weight management programme, eating more healthily at home and doing fun activities with the whole family, have all helped Izzy.

Joining a weight management programme, eating more healthily at home and doing fun activities with the whole family, have all helped Izzy.

View topic summary
SHOW TEXT VERSION
PRINT TRANSCRIPT
Just like try and do more exercise and if there is somewhere like this place try and, just try and go to somewhere like that. Because it really does help you and it boosts your confidence up a lot and just eat more healthy things ‘cause you really do feel a lot better when you are around people who know what you’ve been through, well, yes  just like help other people as much as you can if they’re in the same sort of situation, and just help each other through it.
Just like try and eat better and if you’re like a parent try and give your children more healthy things and try and get them into that sort of regime where they eat better because with my family  we try to eat better but sometimes it doesn’t work, but yes. We just have some nights  where we have like a little treat but that’s like every month or something like that.
And just like try and keep the chocolate and things in the house down and don’t have as many treats.
Right, so keep temptation out the way?
Yeah, just like when you do get temptation to have chocolate or something just like  go and play on the computer or something like that or do something a bit more active.
Not necessarily on the computer though [laughter]. Like if you’ve got a Wii try and do that or something because that’s quite active as well.
And that’s helped me a little bit as well.
We’ve got the Wii board and it’s really fun and the Wii Fit is really quite fun as well because you can have like a family party thing where everybody’s around the Wii board and it’s funny [laughter] and it gives you a bit of entertainment.
Yes, it’s really fun.
Previous Page
Next Page