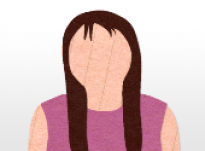 Brief Outline: Bella, 15, loves drama because it helps her switch off and feel like a different person. She thinks confidence is the most important thing because it can help you feel more comfortable with everything. Ethnic background: White British.
Background: See 'brief outline'.

Bella, 15, loves drama because it helps her switch off and feel like a different person. Bella thinks confidence is the main thing because when you have a lot of self-esteem and feel confident with how you look, you can feel a lot more comfortable with everything.
Bella says she can feel a bit paranoid when she’s out because she thinks people are laughing at her or calling her names. She says she can’t go places without feeling uncomfortable or her weight being mentioned and says she didn’t like lining up for school dinners. She feels like she doesn’t fit in at school because she’s so much bigger than the other kids. She says it’s hard to concentrate when people are throwing things at her, calling her names and pulling her hair. Bella thinks bullies are just showing off. The bullying used to make her really depressed but she got a lot of support from her friends, teachers and her mum.
Bella’s school have been really supportive about her weight issues' when Bella took time off school, they sent the school nurse to talk to her and then the teachers found and took her to a weight management programme in their free time. Since going to the programme, Bella says her confidence has grown. She says it really helped her writing in a journal when she was upset, but now she can talk to people about how she’s feeling. Bella says she loved going to the programme because there were other young people like her there and she made lots of friends. She says everyone was really nice and nobody forced her to do any of the activities.
At the programme, Bella was tested for diabetes and told she was at risk, especially because there is a history of diabetes in her family, but the doctor told her if she looks after herself it’s possible she won’t develop it. Bella says she’s really scared about taking medication, having a heart attack or dying early.
Bella says she eats out of boredom and for comfort when she’s upset about something. She thinks she started to gain weight when she was much younger and her mum and dad split up. Bella has found it hard to stick to diets because she feels hungry all the time, or depressed and angry. Now, she tries to avoid sugars, fizzy pop, sweets and crisps, but says it’s hard to give them up because it’s like an addiction. She’s also noticed that healthy foods are more expensive than unhealthy ones. When she gives in to temptation, Bella says she feels ashamed and disappointed in herself. Bella says it’s difficult to exercise outside because she feels uncomfortable and like people are laughing at her. Bella thinks it might take her a couple of years to get to her ideal size but only if she cuts down on things, eats fruit and veg and keeps up her exercise.

Bella was bullied in year 8. She told her teacher who helped stop it.

Show in context
SHOW TEXT VERSION
PRINT TRANSCRIPT
I started getting bullied when I were in high school, when I first started. I used to get called all names and I had boys slapping my backside and laughing at me and calling me ‘Sexy’ and ‘Fat’. And I’ve had things thrown at me. And since high school it’s just carried on. My team leader helped me a lot through a lot of stuff. And I’ve had to join different programmes that really helped me and gained my confidence a lot. And since then the more confident you are the more high self-esteem you get. And well, you just try and find an interest in something.
And it’s best if you’re to ignore bullies and that. Because really it’s what you, whatever I want to do, I just ignore the bullies, and whatever I want to do, well, I just do it, just concentrate on something, just blank people out. But sometimes when you get stuff thrown at you it’s best to go to the teacher, because the teacher always sorts it out. But if they don’t, then you could always go to team leaders and that and write statements of what happened and how it’s done. Because like when I were in Year 8 I’ve had, I had two girls battering me, fighting with me and that. Because I told them to shut up about calling me names and I were... it just really, really annoyed me.

Bella used to comfort-eat when she was being bullied. She feels happier now she's interested in drama.

Show in context
SHOW TEXT VERSION
PRINT TRANSCRIPT
And I moved to a new school because my school were joining up, and it was like meeting new people. But the bullying still came on. And the more you got bullied, the more upsetting you’ve done and the more depressed. And you find that eating food and that really does comfort you. And it’s like when you’re bored and nothing to do in your house, you just go to your refrigerator and just pick up snacks and eat them. I’ve been told that I eat out of boredom and eat out of comfort. And I knew I should lose weight and that, but sometimes it gets harder when people are calling you names. And it really got to me when I were told that I’m borderline diabetic. And that there might be a chance that I get heart disease or illnesses or die young of a heart attack. And it really does scare you. But sometimes eating food is like, like if you’re getting, like if you’re just getting cuddled and getting loved. And it’s just something that you can, something that you can just do straight away. But I find it easy if I find an interest in something. Such as I like drama, and since I started drama and that I just enjoy myself and I switch off and I feel like a new person. And its best if you have something like you really like and you’re really interested in.

At first, Bella found it hard to give up all the food she liked to eat. She steered clear of them after she was told that she was a borderline diabetic.

Show in context
SHOW TEXT VERSION
PRINT TRANSCRIPT
When they told me, it were like before Christmas. I didn’t eat any chocolate at all during Christmas. I stopped myself and that. I had the odd, the odd few crisps and the odd few sweets. But it’s like you don’t have that much and you cut down on a lot and you just stop yourself from eating. Because you know if I, well if you see it, if you’ve been told it, and it’s like a wake-up call. And you just wake yourself up and you’re just like, “Well, I don’t want to do that and, and I really don’t want to have medication all, for the rest of your life.” And you just stop yourself from there and then. It doesn’t matter if you get hungry and that, because you just stop yourself and that because you don’t want to become diabetic and you don’t want to be on medication for your, rest of your life. And you, it, you are, I do cut down. It’s like I always used to drink fizzy pops and that, but I stopped from drinking fizzy pop and like orange juice. I have, I do, the only fizzy pop I drink is Diet Coke. And, it’s like, I try and avoid sugars and that, but sometimes on the odd occasion I’ll probably have something which I know I shouldn’t do. But some, well, like I said, it is hard. But cracking down on it, it’s just, you just, it’s like a wake-up call and you know you shouldn’t be doing it and it’s hard to, it’s hard to give up. But you don’t want to be on medication and you don’t want to like do this. So you just continually do it. So you just try and stop yourself and help yourself.

Bella enjoyed the activities at her Saturday club because everyone was friendly and she didn't feel she was being forced to do anything.

Show in context
SHOW TEXT VERSION
PRINT TRANSCRIPT
It was like people like me, but they didn’t bully you or force you to do it. They asked you nicely and if you didn’t want to do it you could just sit out. But it, it, like everyone wanted to be your friend and everyone wanted to get along with each other. And no, nothing horrible was said to you. And they were just like being polite and being nice. And we learnt a load of stuff about fruits that we’ve never heard of, veg that we’ve never heard of, and we just listened to it and did exercises and teamwork. And we just made a load of friends. And it were fun.
And you said that,  you know, they didn’t used to tell you what to do and if you wanted to sit out, you, you could. Was that something that you, was important for you?
Yes, because it makes you feel like you’re not forced to do it. Like sport at school and that, teachers yell at you to do it. But you feel uncomfortable to do it for who’s watching and that. And eve-, so it’s best to sit out with it. But with this and that, you could sit out if you don’t feel comfortable with it. And it helps you because you don’t feel like you’re forced in it. You don’t think they’re making you do it. And the more you did it and that, the more, there were like stars that you get prizes for, like water bottles, T-shirts. And there was [sport team] tickets. And it were fun. And it was like, it was done during the afternoon, but every Saturday and that, and the teacher, teachers used to give up their time just to take me.

Bella's Mum helps boost her confidence by praising her whenever she does something to help herself.

Show in context
SHOW TEXT VERSION
PRINT TRANSCRIPT
My mum really does support me. And she really, I think, it’s like for my drama and that, she goes to every play that I’ve done and she’s like, “Well done [name].” And she’s like, “You’ve done fantastic. You were the best person there.” And the more she says it, the more, the more best you feel and that. And it really does support you when someone’s sort of saying that you’ve done well and, and that and saying that they’re proud of you.
Yeah. And I mean you said before that you think confidence is the most important thing. Why do you think it’s so important?
Because it’s all does for your self-esteem. It’s how you feel, what you feel like, what you can do. It, it just adds up to everything. It’s like peer pressure and stuff, it, it’s just like you’re confident and that. If you, it’s like if you’re confident on how you feel and how you look, you’ll be a lot more comfortable with everything, the way, self-esteem and that. But it’s just, you’re more comfortable with who you are.
Right OK. And it makes it easier to deal with like bullies and, and things like that?
Yes, it makes it a lot more easier.
Previous Page
Next Page