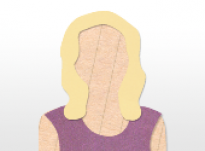 Age at interview: 17
Brief Outline: Alex, 18, is a student. She is in recovery after being diagnosed with anorexia and depression. She has found counseling very helpful and is looking forward to starting at university. Ethnic background: White British.
Background: See 'Brief outline'.

Alex is an 18 year old student who has been diagnosed with anorexia and depression. Alex says she had always been self-conscious about her appearance and had low self-esteem, particularly when she reached puberty. She began binge eating when she started doing 5 A-levels and this, along with her responsibilities at home (her parents have depression) started to get on top of her. Alex felt she was bigger than her friends and began restricting her food intake and exercising, with a view to losing weight before she started university. For Alex, controlling her eating was also a way of putting some structure into her life at a time when she felt she didn’t have any. Because Alex was not eating properly, she found it difficult to concentrate and had no energy, and this was affecting her performance at school and also her ability to do her part-time waitressing job. Over the past 2 and a half years, her weight has fluctuated from around 10 stone, up to 12 stone, and at its lowest point, six stone 10.
A teacher at her school noticed her low mood and that she was often in tears and recommended Alex speak to a counsellor. Alex thought the counsellor was very supportive and found talking to her very helpful, and she also gained some useful coping strategies to help with her depression and her bingeing.
Alex’s mum took her to the GP because she had noticed she wasn’t eating but because Alex was aged 17 at the time, she fell between the children’s and adult’s services. Alex’s teacher noticed the weight loss and asked permission to contact the GP and get Alex referred to a specialist clinic. It took another 4 months before Alex’s referral came through to a children’s service that agreed to take her. Alex says that during this time it was particularly stressful at home, and her two younger brothers were quite upset and worried about her. Through this children’s service, Alex has also been to family therapy along with her parents and brothers. She also takes fluoxetine and risperidone for her depression and anxiety.
As well as putting a strain on her relationship with her brothers, Alex says her anorexia also caused tension with her best friend. Alex says some friends didn’t understand at all, although others did and have been very supportive. Overall, Alex says that things got easier for her when she opened up to people.
Alex is now in recovery and says that working with disabled children has helped to give her a new perspective. Although she deferred her place at university, she is looking forward to going to study psychology.

Alex thinks she changed her eating habits to get some control in her life after her parents split...

Alex thinks she changed her eating habits to get some control in her life after her parents split...

View topic summary
HIDE TEXT
PRINT TRANSCRIPT
I think I tried to lose weight by like not eating during the day and then just found that I lost control in the evening and didn’t really care. Sort of eat more than I would’ve done if I had ate throughout the day.
And what kind of things were you eating?
Just like quite unhealthy things like chocolate and sweets and things.
You had quite a dramatic weight loss didn’t you? How did that happen?
I don’t know. I think I started to eating sort of more throughout the day. But not as much as I should’ve been eating, but because I was eating at regular times I sort of, I don’t know. It was more a control thing I think. In sort of I felt that I had control over that area of my life when everything else at home was going completely wrong and…
So you were eating at regular times? And at the same time as other people?
Not generally. Just sort of I think normally in the evenings with them but the rest of the day with I’d sort of stick to my times kind of thing.
And why was that?
I don’t know it just felt safe.
Safe in what way?
I don’t really know. It’s just… don’t know, it sort of felt like I had a bit of a routine sort of thing because of ever since my mum and dad split up there’s not quite often there’s not really been a routine in our house. And that was my way of putting routine in sort of to me feel like that things were a bit more structured.

Alex tried hard to be the happy person her family wanted her to be.

Alex tried hard to be the happy person her family wanted her to be.

View topic summary
HIDE TEXT
PRINT TRANSCRIPT
Oh, my depression got quite bad. I don’t know my doctor did debate to put me in hospital because of my depression just to keep me safe really. That was another reason that I couldn’t really stay at school because I just couldn’t hold myself together in lessons and things, so. Yeah, he decided that it was probably best that I wasn’t there. Hmm. And there’s been a couple of times there the teacher that got me a referral has called my mum and asked her to come and pick me up and things. And, like, to keep me with her all day and things like that. So…
What was happening?
I’ve done things like to harm myself then, quite a few times. I think I tried to keep it to myself apart from that as well and that made it worse because then I did things that I probably wouldn’t have done if someone had known how I was feeling. And when I did tell people it made it harder in a way.
How did it make it harder?
I think just because I had been pretending to be OK and kind of trying not to worry them by saying everything was fine and then having to turn round and tell them that I had kind of always been lying to them and things weren’t fine and, yeah.
Were they a bit shocked?
Yeah, very shocked. I think there’s only a few people that I have actually told who, I think… I don’t think most people believed it when I told them, I don’t know, I think my mum still has difficulty believing that I ever felt as bad as I did.
Why do you think people have those doubts?
I don’t know, I think because I tried as hard as I possibly could to be sort of the happy person that they wanted me to be, who’s obviously like those sort of, I think they sort of thought, “Well, how could she have wanted to do what she did?” kind of thing, so yeah.
Originally it was, I just cut like a few times. The worst it got was overdosing. Not to the point where anything, I never like was hospitalised or anything, just, I mean nobody even found out that I had overdosed until a couple of weeks afterwards. So yeah. I had been pretending to be OK.
Previous Page
Next Page