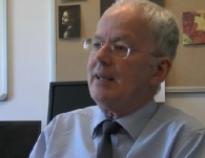 Age at interview: 63
Brief Outline: Peter experienced his first attack of gout when he was on holiday abroad with family and friends. He takes diclofenac to manage his attacks and drinks plenty of fluids. He has had three attacks in the last 12 months.
Background: Peter is married and lives with his wife. He has two children. Peter is semi-retired and works part-time as a University Professor. Ethnic background/nationality: White English.

Peter experienced his first attack of gout when he was abroad on holiday with his family and friends. He noticed that his foot was aching, but his right big toe then became excruciatingly painful during the evening. He remembers his daughter making ice packs to put on his toe to try and relieve the pain. He also took painkillers. After about 48 hours the pain subsided, but Peter was unable to drive and had to use a stick to help him to walk. A few days later he felt completely better.

Sometime later, after Peter had returned from his holiday, he had another attack and went to see his GP. Peter was also a GP at the time, so he and his GP discussed his symptoms and agreed that he had gout. He had a blood test that showed that his uric acid levels were not particularly high. The GP prescribed some anti-inflammatory tablets (diclofenac) for Peter to take if he had another attack.

Peter has about three attacks of gout a year. He has noticed that he is more likely to get attacks during the summer or when he goes on holiday abroad, and believes that this is due to dehydration. He has not had to have time off work, but he occasionally has to use a walking stick during an attack.

When he gets an attack, he takes diclofenac tablets and tries to drink more fluids. Peter sometimes found that the pain would go after two days and then would start again a few days later. He was advised by a specialist that he should continue taking anti-inflammatories for a couple of days after the pain has stopped in order to completely reduce the inflammation. Peter found that this approach worked well for him.

Peter feels that he is in control of his gout, and that he does not get attacks often enough to trouble him. He always takes diclofenac tablets with him if he goes abroad in case he gets an attack.

Peter Y was abroad on holiday in Turkey and can remember his first attack in detail.

Peter Y was abroad on holiday in Turkey and can remember his first attack in detail.

View topic summary
SHOW TEXT VERSION
EMBED CODE
PRINT TRANSCRIPT
I can remember the first attack very well indeed. We were abroad on holiday with the family and with friends as well, in Turkey. And I noticed that my foot was aching during one day, I think, and I assumed it was, because we’d been walking over rough ground or something like that, and then it became excruciatingly painful during the evening. And my biggest memory of it, which has remained in the, sort of, family lore is, that my daughter, who was about 10 at the time, was up all night making ice packs to place on my toe, and - so it was in my right toe. And we, sort of, arranged the bedding so there was nothing sitting on the foot.

I was a GP at the time. One of my friends we were with was a GP, and I’m not sure whether we diagnosed it as gout, actually. I sort of, in retrospect, I hope we did, but I certainly didn’t have any particular specific gout treatment with me at the time, so I just took ordinary painkillers and drank some, plenty of fluids. And, I, my memory is, it gradually went down over about 48 hours, but I was unable to drive, that was another thing I remembered; that my wife had to drive the car. And I also remember having to, sort of, get a stick, fashion a stick out of a piece of a local tree and use that. And that gradually, then, went down and was better in a few days, I think, but it certainly impacted on a day or two of the holiday. That’s what I remember.

Peter thinks it is important to be optimistic about living with gout and ‘learn along the way’. It is possible to manage it and carry on normally with life.

Peter thinks it is important to be optimistic about living with gout and ‘learn along the way’. It is possible to manage it and carry on normally with life.

View topic summary
SHOW TEXT VERSION
EMBED CODE
PRINT TRANSCRIPT
Be completely optimistic. Sort out with your doctor, and with the sort of person you are - who will be very different to me and other people with gout. There’s a lot of different people who will have this – what the best approach is for you, but bearing in mind, you know, that there are lots of things that you can learn along the way about it. But, really, above all be, on average, you can afford to be optimistic and positive - and certainly not feel that - handling it yourself and handling the attacks yourself and carrying on with life is completely plausible.

Peter believes it is important for health professionals to be clear about the difference between facts about gout and things that are still unknown.

Peter believes it is important for health professionals to be clear about the difference between facts about gout and things that are still unknown.

View topic summary
SHOW TEXT VERSION
EMBED CODE
PRINT TRANSCRIPT
As a health professional, I think, be very clear about what the black and white bits are and the grey bits are, and get that clear in your mind. And if there’s an area of complete uncertainty, well sort that in your brain how you’re going to deal with it. Don’t give out, you know, cod bits of advice as a health professional, be clear. “This is what the medical evidence shows. This is definite, you know, it’s caused by this and you will get attacks, and this is how to manage it, and this is the grey area, maybe, but we can do a blood test and you might fall very clearly in a group that would benefit from prevention”, and so on, but get all those arguments clear. But then I would have said, really trust the patient, on average, and give confidence to the patient that they can manage their problem themselves, with appropriate support, and bearing in mind that individuals differ, and some will want more reassurance and support than others.
Previous Page
Next Page