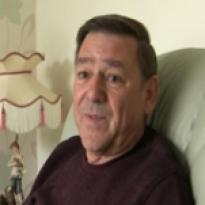 Age at interview: 64
Brief Outline: Neil, 64, gave up smoking when he was 63. Neil is White British, married and lives with his wife. He has now stopped smoking after many years of trying and having several health problems. Neil started smoking when he was 7. He developed into a heavy smoker and smoked 60 a day at his peak. Neil had a series of health problems, including blocked arteries in his legs and neck, quadruple by-pass surgery and a stroke. He gave up with the help of hypnosis.

Neil started smoking when he was 7 and by the time he was 12 he smoked 5 a day. He used to pinch his Dad’s cigarettes, and he remembers being able to buy a cigarette and a match for about a penny at the local shop. At school he says they used to smoke behind the bike shed, and he can remember being caned at school when he was caught. He talks about starting as an apprentice in a job where he would clean cars and unload lorries, and remembers he would be ‘dying for a fag’ afterwards. His mother didn’t smoke and now, looking back, he can’t remember a lot of women who did.

Neil smoked for 44 years in total and has suffered numerous health problems associated with smoking. At the peak he was smoking around 60 cigarettes a day. Neil remembers ‘doing himself a favour’ by smoking the low-tar cigarettes. He had blocked arteries in his legs, and was told he might need surgery; then he had a quadruple heart by-pass. He says that after this operation as soon as he could walk he went to have a cigarette. He claims that the first cigarette was like ‘heaven’ until his system was ‘back used to them’. Neil says that the health service staff ‘knew’ about his smoking so ‘didn’t ask’. Then, about six months later, he had a stroke. Neil says that it was the stroke that affected him the most as his Dad had died of a stroke. After numerous times trying to quit smoking, he decided to ‘blitz it’ by having varenicline tablets (Champix) from the doctor and having hypnotism. Since then he has never touched a cigarette.

Neil tried many different ways to give up. He used silver nitrate mouthwash which made cigarettes taste ‘foul’ and so never used it again as he wanted to smoke. Stress was a major factor in making him start smoking again. Neil tried to use nicotine replacement patches but he found that his skin reacted badly to them. He talks about how he ended up in bed for two days as he had continued to smoke whilst taking the high dose nicotine patches and was suffering from ‘nicotine poisoning’. He tried to quit using some tablets and says he was ‘totally out of the game’ - i.e. felt disorientated - and had to come off them straightaway. Neil says that after two hypnotism sessions he was ‘cured’ and was ‘no longer an addict’. He was so convinced that he threw all the Varenicline tablets away. Neil thinks that what did it was being reminded of when he was young and fit and noticing the difference. He went to rehab and was supported by his cardiac nurse, and found that everyone in the group had been a smoker.

Since then he has joined a gym, started working out, and found that his blood pressure and his cholesterol have come down. He has also had chelation treatment to try to rectify the problems that smoking has given him. He couldn’t walk at one stage but this is improving – all of which he attributes to the chelation treatment. He also thinks this is why he hasn’t needed the bypass operation for his groin. He is now looking after his health more, he is taking vitamins, and eating healthily, although cutting down on sugar and salt is hard. Neil finds it hard going away on holiday now, because the insurance is so high. Other than being ‘chuffed’, he doesn’t feel any different in himself, but notices that he isn’t as wrinkly as he was when he was smoking. He has put on a little bit of weight. Neil now wonders why it took him so long to stop and is proud of himself for stopping. Neil loathes cigarettes and is now an ‘anti-smoker’.

Neil managed to give up after 44 years of smoking, after a series of serious health problems.

Show in context
SHOW TEXT VERSION
PRINT TRANSCRIPT
And then... your health pulls you up sharply, with a heart attack, and but prior to that I knew I’d got problems. I’d got breathing problems and still smoked. I got blocked arteries in my legs, bifemoral arteries and they offered to do a by-pass on them, because I was struggling to walk and all that was through smoking and then I had the heart attack as I said, followed by a quadruple by-pass surgery, which wasn’t at all pleasant [clears throat] and I still carried on smoking. And then it was about six, seven months later, I had a stroke, and I was still smoking when I was in the hospital. And it was at that point when I came out of the hospital and I decided that I didn’t want to end up a cabbage if you like, and decided to, I was going to stop smoking. So I decided to blitz it by taking tablets from the doctor and by having hypnotism from my rehab nurse. And she hypnotised me and I was taking the tablets at the same time, and from there on in I’ve never touched a cigarette since.

Neil didn’t like how the smoking ban was implemented and thought that businesses and smokers should still have a choice.

Show in context
SHOW TEXT VERSION
PRINT TRANSCRIPT
What are your thoughts about the smoking ban and how did that affect you in your life?

I don’t think the smoking ban was right in the way it was implemented. I think it should have been up to the landlord if it’s a pub, or if it’s a café the owner of the café. I think it should have been up to them to decide whether they were going non smoking or smoking. Or like in the old days pubs used to have a smoking room and if you wanted to smoke you went into the smoking room. So, it wasn’t a choice. It was just you will not do it. And I don’t like anyone talking to me like that. Especially the government. And it took away people’s choice. And I don’t think that is right at all. Has it affected me? Well no, not really, because I decided I was stopping. If there are smokers around it gets to me for a bit like, but after that it just don’t matter really. So, no if they want to smoke it’s fine by me. Even though I don’t like it, but I know what they’re doing to themselves. One day they’ll stop or they’ll die.

Neil went on smoking while using high dose nicotine patches. He soon felt ill and a doctor told him it was due to nicotine poisoning.

Show in context
SHOW TEXT VERSION
PRINT TRANSCRIPT
Oh more modern day of course, the patches. And the patches sensitised my skin. You had to buy the patches then you didn’t get them on the National Health [coughs]. And they sensitised my skin and I had to move them all round your body and everywhere I put a patch left a big red itchy mark afterwards. Well you can imagine what my bum looked like can’t you [laughs]. But yes, you just literally stuck them everywhere to avoid using the same place. But I gave up smoking. In fact, only looking back, for two days, because I was taking the high dose nicotine patches. And I continued to smoke, not as many as I was smoking. But I did smoke, and by the end of the day I felt so ill. I went to bed, and the next day I never got out of bed. I felt so, so ill. And then I went to the doctors and he told me that it was nicotine poisoning. I’d actually poisoned myself by smoking on top of these nicotine patches. So I was a bit frightened of using nicotine patches after that. Because I was still having a cigarette [laughs]. This must sound absolutely stupid.

When Neil was attending cardiac rehab, a nurse wanted to try hypnotism on him to help him quit his 60-a-day smoking habit. After only two sessions he never wanted to smoke again.

Show in context
SHOW TEXT VERSION
PRINT TRANSCRIPT
And I felt, I was feeling better each session I had. And of course they ask you a load of questions when you first attend, and want to know, “Do you smoke?” “Yes.” “How many?” “About 60?” “How many?” “60.” “It’s a wonder you’re still alive.” “I know. I was nearly dead though.” [Laughs]. And after a few weeks [name of nurse] come over to me, and she said, “Look I’ve been practising hypnotism and I’d really like to take you on and try and get you to stop.” I said, “You’ll never do it [name of nurse]. Never in the reign of pigs pudding, I’ve tried everything.” She said, “Well I’d still like to try.” I says, “Oh all right then.”

Anyway it took a few weeks and then she phoned me, and she said, “Can you come up?” Because she’s a very busy woman, there’s a lot of people are having heart attacks. And I went up there, and she’d got a side office there. Lay on the bed, and I can remember the words.What was it like?

But I knew what was happening. But the words that pressed my buttons was, “I want you to take yourself back to when you were young and fit.” What she said after that I have not got a clue. Because I was thinking, blimey, yes, I used to run the mile, I used to do cross country running. And look at me now I couldn’t run fifty metres. I can’t, I can’t even walk fifty metres. And that’s all for the rest of the session that’s all I was thinking of. And I could just picture myself running, you know, and I think that was the bit that did it actually, the hypnotism.

So she give me one more session and I just, just never wanted to smoke again. So I told the no smoking clinic. I said, “I don’t need these tablets anymore.” She went mad at me.
Previous Page
Next Page