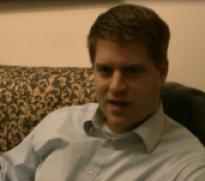 Age at interview: 28
Age at diagnosis: 22
Brief Outline: Peter first experienced depression when he was a teenager but he did not seek help from a GP until he was at university. He was initially prescribed fluoxetine which wasn’t entirely effective. After trying this for a while he self-referred to see a family friend who is a psychiatrist who recommended a change to venlafaxine, which he finds works well to alleviate depressive symptoms.
Background: Peter is single and works as a Journalist. Ethnic background: White British

Peter first experienced depression as a teenager when he said he often felt that he didn’t fit in or enjoy life as much as other teenagers. He first realised that these feelings were a symptom of depression when he was about 16 and was feeling totally overwhelmed. Looking back he feels he had a ‘mini-breakdown’ but hadn’t really known why or what was happening. He managed to get through this time and the depressive period passed.

It wasn’t until he went to university that he experienced another severe depressive episode and this time he went to see the GP. His GP prescribed fluoxetine which lifted his mood and eventually he stopped taking it, although his GP recommended that if he felt the need he could take them now and again when he felt he needed to. Although he did try this strategy, ultimately he didn’t feel the benefits from taking them on an occasional basis.

When Peter experienced a further episode of depression he decided to speak to a family friend who is a psychiatrist about how he was feeling. The psychiatrist recommended that he switch to another antidepressant, venlafaxine, which he found lifted his mood almost immediately and he said he felt better than he had done in years.

Peter was initially a little erratic about taking the antidepressant regularly but now realises the importance of sticking to the daily regime and keeping going with them even when you feel all right. Although Peter would like to stop taking pills, he has resigned himself to the fact that he might have to continue taking them as he has found improvements in his mood often disappear once he stops taking the medication.

‘I’d really love to be in a position where I wouldn’t have to take any pills but I think , my, every experience I’ve had of stopping taking pills has been negative’.

Peter has also developed personal strategies for managing depression, such as keeping a mood diary and monitoring his sleep. He has also found Cognitive Behavioural Therapy (CBT) and counselling useful. Peter feels that it is important for health professionals to offer patients a range of different options. He also thinks it would have been helpful if the doctor had initially given him more information about the variety of different antidepressants and to have known more about them.

‘The thing with antidepressants is that there are so many of them I wish, what I wish someone had told me when I was starting out is there are so many of them they do different things, they might not work …] you need to be patient with them, you need to realise that it’s not going to wave a magic wand and you’re going to feel fantastic immediately it might take a week it might take, in my case you know it took years before I got on the right one.

Peter said fluoxetine levelled out’ his emotions and helped him...

Peter said fluoxetine levelled out’ his emotions and helped him...

View topic summary
SHOW TEXT VERSION
PRINT TRANSCRIPT
When you first went on the fluoxetine, the first time did it take a while to take effect did you find? Or were you told what to expect?

I think, I’m trying to remember to be honest I think it did take a little while to kick in certainly at least a week or maybe a couple of weeks before I felt it but yes I seem to remember it kicking in but, you know, in terms of what fluoxetine did for me it in no way comparable to what Vensir did for me I mean that sort of just changed my life.

So what fluoxetine did for you in terms of your mood how would you describe that then?

I’d describe it as reducing your emotional range I, if you …..on a plus/minus graph when I was really bad I could, I mean the pluses were never really an issue I could be five or six out of ten or seven or eight out of ten, it didn’t really matter and I never really worried about that too much. What was very tough was when you were in the minuses and I could feel a minus 10 and I went through a long period of feeling minus 10 and thinking even when things were going my way that I wasn’t, you know, having a happy day, basically having a happy time. And so I found with fluoxetine what it did was just reduce the emotional range a bit, the happiness thing didn't really wasn’t really affected hugely although I did find a little bit that I wasn’t amazingly unbelievably happy or incredibly enthusiastic about things which I was quite worried about at one stage but I found it didn’t go down to the minus 10 it only ever went down to the sort of minus three or four.

Kept you on a level.

Kept me on a level, kept me kind of coping with life a bit better, yes.

Fluoxetine wasn’t effective for Peter, but when he started...

Fluoxetine wasn’t effective for Peter, but when he started...

View topic summary
SHOW TEXT VERSION
PRINT TRANSCRIPT
Eventually I went back to him went back to the psychiatrist and he said, you know, I don’t feel that fluoxetine is working for you anymore maybe it’s time to put you on something else and he put me on Vensir and that was just like waving a magic wand I mean it just almost immediately I was right back on, I felt better than I had in years I was taking, you know, not an unsubstantial dose about 40 milligrams a day but I just felt brilliant, I felt fantastic and the Fluanxol is for, I’m taking that as well, which is for anxiety rather than depression although obviously the two are linked. And I started taking it and I just feel fine now and I take then every day and occasionally miss a day but that usually accident rather than design or I’ve gone to my parents’ house which is 30 miles away and I’ve forgotten to you know, bring them with me or something like that but it’s never more than a day anyway. And I just feel fine now I mean I have off days and, you know, like everybody I have good days and bad days but my experience of antidepressants and particularly Vensir is that it doesn’t make you feel happy or sad it just makes you able to cope better and that’s good.

You said that it kicked in almost immediately?

Can you describe how different you suddenly felt then?

Peter felt that ‘It’s really tricky socially not to drink... it must...

Peter felt that ‘It’s really tricky socially not to drink... it must...

View topic summary
SHOW TEXT VERSION
PRINT TRANSCRIPT
I think it’s really tricky socially not to drink I think it’s really tricky socially not to drink I think, you know, it’s tricky not to get into a conversation when someone says, because I went off alcohol for quite a long time actually I went off, I said to people I was going off it for Lent but really I was going of it to stabilise myself around the time of my last sort of big episode and I just completely went off alcohol for a good sort of six or seven weeks. Now I don’t drink a lot now but I might drink once a week and I don’t drink to get drunk but I mean last night for example I’d a friend in town from America and we went out and I maybe had four pints or something like that so, you know, that’s not crazy but obviously I’m not going to drive or anything after that. so I think if you try to limit yourself to once a week or special occasions and if someone offers you a glass of wine with a meal or something I’d say take it but just be careful. And it is, it must be up to the individual person, I mean it’s going to affect different people in different ways, people are going to obviously be bigger physically or not but I, I find I can handle a couple of drinks and it not adversely affect me in terms of my antidepressants.

Do you tell other people that you take antidepressants?

Can I ask why, why would you not?

I do sometimes I wouldn’t volunteer the information but if, if it came up in conversation I might mention it but it will depend on people, certainly I mean I have to declare to my employers what medication I’m on which I’ve done but I wouldn’t ever say to the person sitting beside me oh yes I’m on antidepressants and I think, I still think there’s a stigma with mental illness.

‘I wish someone had told me when I was starting out that...

‘I wish someone had told me when I was starting out that...

View topic summary
SHOW TEXT VERSION
PRINT TRANSCRIPT
I’d say don’t be afraid because you know, it’s similar when you get a headache you don’t think twice about taking a paracetamol or, you know, ibuprofen or whatever you just take it because that’s, it's there and it helps. the thing with antidepressants is that there are so many of them I wish, what I wish someone had told me when I was starting out is there are so many of them they do different things, they might not work you need to be patient with them, you need to realise that it’s not going to wave a magic wand and you’re going to feel fantastic immediately it might take a week it might take, in my case you know it took years before I got on the right one for exactly what I needed and, and that was a great feeling when that happened but at the same time, you know, the wait had to be worth it. So I’d say just don’t be afraid trust your doctor if, you know, I’m generally pretty pro the medical establishment and just try it and if it isn’t working then tell your doctor and just don’t suffer in silence, don’t say after three months you don’t feel any different you know I can’t you know just tell them it’s not working for you.
Previous Page
Next Page