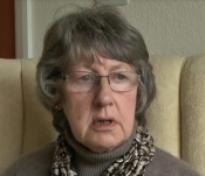 Age at interview: 71
Age at diagnosis: 28
Brief Outline: Janet was first diagnosed with depression after the birth of her first child when she was in her 20’s and has experienced low mood and bouts of severe depression almost continuously. Over the years she has tried a number of different antidepressant medicines and later in her life she was diagnosed with Bipolar disorder and now takes mood stabilising medication, and antipsychotics as well as antidepressant medication.
Background: Janet is retired and lives with her husband. They have two adult children. Ethnic background: White British

Janet was first diagnosed with depression after the birth of her first child when she was 28 and was prescribed Valium (diazepam), which at the time was commonly given for problems with anxiety and depression. Janet has experienced depression for most of her life since that time. Over the years she has been prescribed a number of different antidepressants, including amitriptyline, dosulepin and lofepramine from the tricyclic group, and the SSRI paroxetine. Some years ago she was diagnosed with bipolar disorder and since then has also taken mood stabilising medicines and antipsychotics in addition to antidepressants.

‘She [psychiatrist] put me on lithium and said I had manic depression, which is bipolar… and that it was a chemical and hormonal problem…. [which seems to be] why I never seemed to get better, I was up and down such a lot’.

Janet’s experience of taking antidepressants has largely been of feeling ‘dopey and tired’ and in combination with the mood stabilisers she takes says that she generally feels blank and numb.

‘[taking lithium] you don’t really feel anything, it stops you going high….. I felt it masked things, you know the edge was taken off, all the edges…. It masks your emotions’.

Janet feels that of all the antidepressants she has tried that Seroxat (paroxetine) was one she preferred, ‘the SSRI seemed to suit me better, I just felt better on them generally’ although she says her mood has generally always been low despite taking medication. She took Seroxat (paroxetine) for some time, but when she recently began to feel severely depressed and very fearful and anxious, her psychiatrist changed her back onto lofepramine. She also takes a mood stabiliser [lithium] and an antipsychotic medicine [olanzapine] which have worked well to quell the fears that she was experiencing, although she finds that taking this combination of medicines leaves her feeling muddled and ‘wooly headed’ a lot of the time. It can be difficult to separate out whether the effects can be attributed entirely or directly to the antidepressant, or whether it is the combination of other medicines. She currently has to have her blood levels monitored closely to ensure calcium levels do not reach dangerous levels, as taking lithium may have caused a problem with her parathyroid gland.

Over the years Janet has tried talking therapies and seen a number of psychiatrists but she has not felt that these have helped. As she has become older she feels less hopeful of ‘recovery’ and is resigned to feeling depressed and to continue taking medication for the rest of her life. Janet would like to be more involved with discussions and decisions about her treatment but finds it hard to speak out.

‘I don’t like to rock the boat…. If I question her [psychiatrist] about what she’s doing I feel it’s rocking the boat and that I should accept what she says’.

Janet also takes other medicines for other conditions; osteoporosis, a parathyroid condition, and sometimes has to take others to counteract side effects such as constipation or diarrhea.
Janet is tired and weary of all the changes that have been made to her medication over the years and finds it frustrating that she lacks energy and motivation ‘they deaden me’ but feels that on the whole she is better off taking antidepressants and the other medication she has been prescribed than not.

‘It’s better to have them than not have them. I mean I may grumble about not feeling very bright and alert but I know they probably do me more good and I would be worse if I didn’t have them’.

Janet was first prescribed amitriptyline in her 20s after the birth...

Janet was first prescribed amitriptyline in her 20s after the birth...

View topic summary
SHOW TEXT VERSION
EMBED CODE
PRINT TRANSCRIPT
I first came to, became depressed after the, quite some time after the birth of my daughter, I was 28 at the time, about 28… it, my general health hadn’t really been following her birth, in that I was losing weight, I lost weight in fact in my pregnancy it wasn’t really clear cut what was wrong for quite a little while but my GP was very good and noticed that I worried a tremendous amount and he put me onto a drug called Valium which is no longer used and just to calm me down because he said I’d burn myself out otherwise. And he… put me in touch with a psychiatrist for reasons nothing to do with my depression but because I was seen by the psychiatrist he ended up treating me. I went onto Tricyclic drugs… amitriptyline was the first drug and I was, I felt very dopey and tired with this drug I didn’t like it at all, I didn’t like being on it… I didn’t really get any better and I was eventually hospitalised.

Janet takes seven different tablets each day. She sticks them...

Janet takes seven different tablets each day. She sticks them...

Seven or eight. And is it all at different times of the day, do you have a routine?

Does it, do you notice it if you haven’t taken one?

No. So although you’re a bit irregular sometimes, it’s not very often?

How do you feel overall about the fact that you have to swallow all these tablets or have you just got used to it over the years?

I’ve just got used to it yes. I mean they’re for two different things I mean one is for psychiatric things and the others for bones.

And so I can’t really muddle them up and say they’re all a nuisance because they’re for different, different things.

Janet feels different about the medicines she takes for her physical health...

Janet feels different about the medicines she takes for her physical health...

View topic summary
SHOW TEXT VERSION
EMBED CODE
PRINT TRANSCRIPT
How do you feel overall about the fact that you have to swallow all these tablets or have you just got used to it over the years?

I’ve just got used to it yes. I mean they’re for two different things I mean one is for psychiatric things and the others for bones.

And so I can’t really muddle them up and say they’re all a nuisance because they’re for different, different things.

Janet has been taking antidepressants and other medicines...

Janet has been taking antidepressants and other medicines...

View topic summary
SHOW TEXT VERSION
EMBED CODE
PRINT TRANSCRIPT
On the whole it’s better to have them than not have them. I mean I may grumble about not feeling very bright and alert but I know that really they probably do me more good and I would be worse if I didn’t have them, if I came off the olanzapine I would probably be terrified again of everything so I think they are a good thing.

So they’re of benefit to you?

Yes I think so.

But it sounds like you’re not really in that kind of’ recovery mode’ where, you know you could get to a point that where you could maybe step it down or stop relying on them so much. Do you see that as a possibility for the future, I mean does recovery mean anything to you or do you just think that you’ll stay pretty similar to how you are?

Well I, I think I’ll stay more or less as I am which isn’t really very, very positive is it? It’s the fact that I am so much older.

Does that upset you?

Well it upsets me because I can’t do things as I used to do, you know, I couldn’t make a meal for anybody other than my family and I’m just so slow and so nervous and it doesn’t, as a family it doesn’t matter of it doesn’t go right as it would in other ways and I put that down to being older because people who are not on drugs like me would say ‘oh I can’t do what I used to do’. And yet on your website that I looked at last night, there were a number of, several older people who actually, in their 70’s and 60’s one in their 70’s and two in their 60’s who actually said that they had got better.

So that was quite encouraging.

View topic summary
SHOW TEXT VERSION
EMBED CODE
PRINT TRANSCRIPT
Between having my daughter and going into hospital I did do some rather, you know, I’d take the car out and drive erratically and my husband took the keys away from me I couldn’t stand my daughter screaming one day and I put her out into the road I don’t know, that was a terrible thing to have done, I mean the traffic didn’t go as fast then but then when I went into hospital I just rushed out of the house and caught a bus and went to the doctors surgery and one of the doctors who had seen me before said ‘well she needs some proper treatment’ and I went to hospital, but I was quite.

What was your experience like of being in hospital was it a psychiatric ward?

Yes it was the [name] hospital it no longer exists but...

Did you go in as a voluntary patient?

Yes, yes actually I was there for six weeks and I enjoyed that, I enjoyed it because there were no responsibilities and it was nice being among the other people so for the first six weeks but then when I took the overdose it was different, I went to a different ward and I hated it.

What was the difference? Between the times when you thought it was good and the other time?

Did you take an overdose of tablets?

The ones that you’d been prescribed?

Yes and so I think that had a lot to do with it.
Previous Page
Next Page