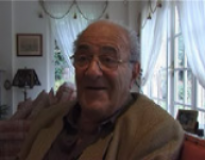 Age at interview: 80
Age at diagnosis: 74
Brief Outline: Diagnosed with epilepsy in 1996, which is not controlled. Was prescribed phenytoin (Epanutin) and sodium valproate (Epilim) in the past. Current medication' lamotrigine (Lamictal) daily, and clobazam when needed.
Background: Retired chartered accountant; married, 3 adult children.

Explains that he presented with epilepsy at the age of 74.

Explains that he presented with epilepsy at the age of 74.

View topic summary
SHOW TEXT VERSION
EMBED CODE
PRINT TRANSCRIPT
I'd been taking temazepam for many years and a friend of mine who is not a doctor but who thinks he knows everything, he told me if you stop taking temazepam for four days you'll be so tired you'll sleep. And foolishly enough I listened to him and after four days, I was in Switzerland with my wife and we were just coming down a mountain pass and there was a car waiting for us at the bottom to take us to the airport and I had my first fit in the car. My wife thought I had a stroke actually. And I went to the little cottage hospital in the little town and they looked after me. But then they took me, they sent me to Lucerne where a neurologist took the necessary readings and advised me that it was the sudden withdrawal of the drugs which caused this fit. And that's basically the first experience I've had.

Yes, and how long ago was this?

This was five or six years ago.

Six years ago, how old were you at the time?

Explains that he is satisfied with the information he has been given.

Explains that he is satisfied with the information he has been given.

View topic summary
SHOW TEXT VERSION
EMBED CODE
PRINT TRANSCRIPT
And when they diagnosed you with epilepsy did you know much about epilepsy?

No, nothing.  Nothing at all.

Nothing.  Did they give you a lot of information about the condition or did you look for some books?

No, I mean I think Professor [name] was the first one who really gave me an insight into the illness.

Did you feel like finding out more information about epilepsy, or you've been pretty happy with the information?

Well I've had a lot of pamphlets sent to me from the office of Professor [name] , leaflets and things. That's all I've asked for.

Yeah, and you felt that you've had enough information, there's not more information that you would like on anything?

I haven't looked for anything else. I mean I believe that doctors give you everything you need so why should I! (laughs).