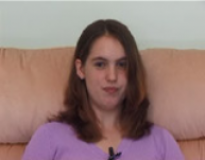 Age at interview: 18
Age at diagnosis: 14
Brief Outline: Diagnosed with epilepsy in 1998. Has tried sodium valproate (Epilim) and is currently taking lamotrigine (Lamictal), which has reduced the frequency and intensity of seizures but epilepsy is not controlled. Current medication' lamotrigine (Lamictal).
Background: Part-time sales assistant; single, no children.

Discusses what happened before she was diagnosed with epilepsy.

Discusses what happened before she was diagnosed with epilepsy.

View topic summary
HIDE TEXT
PRINT TRANSCRIPT
Well ever since I was little really, I've had what people would think of as behaviour problems. And then recently, well when I was in secondary school, about three or four years ago mum was being called up to school regularly because of behaviour problems and me roaring at teachers and stuff like that and taking offence at the wrong things. And in the end I was admitted to hospital because I was harming myself and hallucinating and stuff and hearing noises in my head. And at first they thought it was, I was schizophrenic. But they ruled that out and after about six or seven weeks they decided that I had mental health problems.

So I was taken up to a psychiatric unit. And they showed me around and said 'This is where you'll be staying for the next six weeks,' to get better. And all the time mum was saying you know 'Well why don't you give her an EEG, you've got nothing to lose?' They were saying 'Well it can't be epilepsy because she's not convulsing and in the end they said 'Well we'll give it a go.'

Actually that was when we went up to the unit, the doctor there said 'Has she been checked for epilepsy?' And mum said 'No they won't do it.' And by the time we got back it had all been arranged and a date had been set. And then it came back that I was photosensitive and complex partial seizures. And that night as soon as I got ill, they had cot sides up you know, flip charts out and everything, I had two nurses by my bed and the difference was amazing.

Yeah I think right, looking back in hindsight, they have nothing to lose by doing an EEG at the beginning. They were saying 'It cannot be epilepsy because she's not convulsing.' I can see where they're coming from because that's what they thought but if they'd actually looked into it I could have been saved a lot of bother.

Describes her experiences of having complex partial seizures.

Describes her experiences of having complex partial seizures.

View topic summary
SHOW TEXT VERSION
EMBED CODE
PRINT TRANSCRIPT
So as you were growing up was it always the same or it varied?

It varied, I can remember ever since I was little having this sort of feeling in my stomach of having to run, you know. I remember that. And then in school I think I know I used to find it hard to sort of, I don't know what the word is, not interact with people, hard to um, I don't know, whereas people would react sort of normally to arguments as it were, I'd blow up out of nowhere and really lose the plot.

So you would shout?

Yeah and then it would go from there and it was also the more stress I had, then I'd start seeing things. And I'd think people were coming for me you know, and they were just getting closer. So I used to lash out.

It varies to be honest. I usually, it feels like my tongue is ten times the size that it is and my speech becomes really slurred. And I feel, I feel like I've gone 'thick' because I'm thinking the words in my head but they're not coming out of my mouth the way that they should be. And last time I had a seizure it was quite bad and I ended up in hospital. But my feet had gone so that I was walking on the sides of my feet, but I didn't have any control over that. I couldn't get my legs straight. And I was seeing things coming in through the windows and walls and things. I know they're not there and I know I'm hallucinating, but there's nothing I can do about it. And its really quite scary, its weird.

Discusses having photosensitive epilepsy and how her emotions can affect her seizures.

Discusses having photosensitive epilepsy and how her emotions can affect her seizures.

View topic summary
SHOW TEXT VERSION
EMBED CODE
PRINT TRANSCRIPT
Oh another weird thing is I can watch sports on telly, I can't watch films very well, because it flashes from scene to scene. Whereas on sports such as football it tends to follow the players you know and it sort of, the camera glides. And cartoons.

And is that just on the telly or also in the cinema say?

Also in the cinema, I struggle with the cinema because its so dark. I have to have lights on when I'm watching the television.  In the cinema it's dark and it's really loud as well and it gets quite hot. I went to the cinema for the first time in about six months the other week. We actually went to see like a, well me and my friend thought it was really scary, it was a '12' I think. We spent the whole time with our hands over our eyes! We were like! (laughs). It was good, but again it was the flipping from scene to scene.

Yes, but you managed to watch the whole thing?

Yeah and I, I just concentrate on when it will be over. I try and break it up into sections, you know sort of quarter of an hour until the break and then three quarters of an hour until it finishes.

Explains how weight gain and other side-effects affected her.

Explains how weight gain and other side-effects affected her.

View topic summary
SHOW TEXT VERSION
EMBED CODE
PRINT TRANSCRIPT
Then they put me on Epilim and the side-effects started straight away. I put on about two stones in a year and they said 'Oh that can't, that's not the Epilim, its just because she's just overweight, she's just eating too much.' And mum was saying 'No I'm sure it's the Epilim.' And my fits changed as well, instead of being complex partial seizures I was having tonic clonic seizures. I was just dropping to the floor. And every time this happened they upped the dose of Epilim. Then afterwards they said 'Oh it's a side-effect'. And this was when I was on the 2000 milligrams a day, and well I shouldn't be on that dose. I had loads of problems as well.

Then they changed it to Lamictal and when I came off the Epilim I lost a stone and half in about six months. So it was definitely the Epilim. I was having terrible, terrible period problems, which they now say that was the Epilim as well.

When I was on the Epilim I was sleeping all the time. I could go to sleep at six o'clock in the evening and wake up at ten o'clock in the morning and still need a nap in the afternoon. It was terrible. And mum was speaking to the doctor about the side-effects and everything and they said 'Well we could try you on Lamictal.' And the difference to me was brilliant. I had so much more energy and I lost a lot of weight, you know it was good.

Discusses the benefits of searching for information on the internet, and found some sites better...

Discusses the benefits of searching for information on the internet, and found some sites better...

View topic summary
HIDE TEXT
PRINT TRANSCRIPT
And over the years have you looked for information on epilepsy yourself?

And have you found it useful or, where have you looked?

On the Internet mostly, and when I ask around I'm actually surprised at how many other people have got it or know someone who has got it. Having said that I'm also surprised at how many people don't know anything about it you know, because even before I was diagnosed I knew it existed. But I'm a bit scared actually by some people's responses, like my friend said 'Oh if you're convulsing on the floor you have to stick a spoon in your mouth.' I was like 'No!  Don't put a spoon in my mouth.' She was like well that's what I was taught in First Aid. The American websites are more honest than were British ones so it's quite, it's worth looking.

When you say they're more honest, they give you more information or?

Recommends carrying an ID card and being open about having epilepsy.

Recommends carrying an ID card and being open about having epilepsy.

Yeah, don't worry about it. Relax because if you stress about it, its just worse. The more stress the more fits you're likely to have. Don't hide it from people because that adds to stress and you can't get help if people don't know. I've got a medical alert bracelet because if I was to have a seizure when I'm out, some people would think I was drunk or on drugs. I find that a help as well, its just reassuring, I haven't had to use it but its there. And I always carry ID in my purse. Um, just don't try and do, especially to youngsters, don't do things to look cool if you know its gonna react, if its gonna cause more fits. I mean don't be afraid to say 'I can't do that,' you know. Or 'Why don't we go to a pub for a drink rather than out clubbing?' And also be strong and sort of walk out with your head held high. You're no different to anyone else, you're not epileptic, you've got epilepsy. But you're a person in your own right, so just carry on like normal.

That's brilliant. It sounds as if you've really become stronger and more confident from the advice that you're giving.

I think so. I think if I'd have listened to the doctors I would be mad by now! But um, I think a lot more has got to be done to make people aware of the different types of epilepsy. I mean paramedics that have come out to me don't know about complex partial seizures, to me that's scary! Because these are professional people and they just don't know it exists. It's not their fault but I think more should be done.