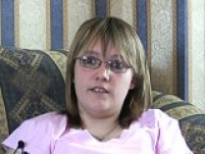 Age at interview: 17
Age at diagnosis: 6
Brief Outline: Kimberley was diagnosed with epilepsy when she was about 6. She didn't have any seizures for years, but they came back a year before the interview. Currently Kimberley is on lamotrigine and has seizures at night time. She also has Diabetes Type 1.
Background: Kimberley is 17 and currently unemployed. She is single and lives at home. Ethnic background / nationality' White British / Scottish.

Kimberley is 17 and currently unemployed. When she was about 6 she was diagnosed with epilepsy. Kimberley says she can't remember anything of this time or when she was first told that she had epilepsy. She was first put on Epilim (sodium valproate) which kept her seizure-free until she was taken off her medication and the seizures returned. This happened less than a year before the interview. Kimberley was then put on lamotrigine which she is happy with.

Kimberley also has Diabetes type 1 and needs to inject insulin four times a day. She says life with two conditions is hard because' “you've got to think about both of them, not just about the one”. She says it's confusing to remember to take medications for both conditions at set times. She says it's a "scary life" living with epilepsy, because she can never know when she might have a seizure and she gets no warning. She says stopping smoking has helped her, as well as starting to take her epilepsy medication at set times twice, instead of once, a day.

When the seizures came back, Kimberley was just due to send off for her provisional driving licence. Not being able to do that was quite upsetting for Kimberley and she is hoping to start taking driving lessons again in the future. She has a bus pass which gives her free access to all buses across Scotland.

Kimberley lives at home with her mum and stepdad. She is currently looking for work but says it's hard. She'd like to work with children and she currently helps out at kids' club as a volunteer once a week. Kimberley says she doesn't go out a lot as she feels safer at home and she says she mostly spends time on her computer, socialising with her friends over the internet.

Kimberley's seizures were better controlled after she started taking her medication at set times...

Kimberley's seizures were better controlled after she started taking her medication at set times...

View topic summary
SHOW TEXT VERSION
PRINT TRANSCRIPT
Well I think it was because I'd taken my medication at different times, like in the morning when I get up and that could be any time, then at night before I go to my bed, but now I'm taking them at set times and that's working.

Okay. How do you take your medication at the moment? Is it'?

Well I take it at the same time every morning, when my Ma wakes me up before she goes to her work, then about 11 o'clock at night. Yeah and it's spaced out so it's helping.

Do you're on lamotrigine now?

Kimberley's epileptic seizures came back after several years and her mum first thought she was...

Kimberley's epileptic seizures came back after several years and her mum first thought she was...

View topic summary
SHOW TEXT VERSION
PRINT TRANSCRIPT
Yeah, so when you, so you had the diagnosis when you were quite little, did you have any seizures then at all?

A couple, then it stopped and I was off for a while then, the doctor stopped my medication, then I started taking them last September/October.

And how did it come back? What happened?

Well I was on holiday and my mum thought it was a diabetic fit then she took me in to get a sugary drink and we went back to the apartment to check my blood sugar, then my blood sugar was high, so it wasn't that. Then I came back from to' home got an appointment from the doctor and found it was epilepsy, back.