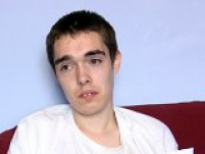 Age at interview: 20
Age at diagnosis: 3
Brief Outline: James was diagnosed with epilepsy when he was 3. He is now on Epilim (sodium valproate) and Epanutin (phenytoin) and has seizures occasionally.
Background: James is 20 and lives in a residential college for young people with epilepsy where he is a full-time student. Ethnic background / nationality' White British.

James is 20 and a student at a residential college for young people with epilepsy. James was diagnosed with epilepsy when he was 3. His first seizure happened in the garden where he was with his dad at the time; he suddenly fell to the ground with a seizure. Since then James kept having quite a few seizures, especially at a time when his epilepsy medication was being changed. Now James is on Epilim (sodium valproate) and Epanutin (phenytoin) and takes his medication twice a day. These days the seizures happen occasionally and then mainly at night. James says that after he's had a seizure he feels really tired and "knocked out" the following day. He has complex partial, absence and tonic clonic seizures.

James has been at the college now for 3 years and he says it's enjoyable. Mostly he likes playing football, going to the gym and to the disco. He also likes working at the college farm, looking after the animals. James has a lot of friends at the college and he likes going to the youth club, or playing pool or darts. He stays at a house for boys but says they can invite girls from other houses to come around. He has just recently been on a holiday to the Isle of Wight with the other boys.

James met his girlfriend at the youth club at the college but she has moved out now and James goes to visit her when he can. Because James can't drive yet, his mum will drive him to see her. When at home James goes shopping and travelling with his parents. James also works in the local supermarket which he really enjoys. He's been doing so well that he's going to get a job in a bigger shop of the same chain. In the future, James wants to get his own house and get married to his girlfriend.

James works in the local shop and is going to move to a bigger one because he's been doing so well.

James works in the local shop and is going to move to a bigger one because he's been doing so well.

View topic summary
SHOW TEXT VERSION
PRINT TRANSCRIPT
I'll probably be doing, after I've done my, when I do my work prep, I'll probably be doing more of it than now, at the [shop name]. I'll be doing more now 'cos I'm going onto a bigger one now, so there'll be more stuff to do. And they might put me onto a till, I'm not saying they will, 'cos he's saying I'm very good at working. And I've been working very good he said. And he's impressed with me.

What do you do in the shop?

Stack the shelves, I also get the, we also, you know rather than doing the trolleys we have baskets and I have to do all the baskets put them back there again. Always back to the place where they're supposed to be to the door, gotta do that.

James has nocturnal seizures and sometimes he sees different colours during a seizure.

James has nocturnal seizures and sometimes he sees different colours during a seizure.

View topic summary
SHOW TEXT VERSION
PRINT TRANSCRIPT
James' I don't ever fall over like, I don't have that kind of seizure, I don't have something like that.

What kind of seizures do you have? What are they like?

James' I have ones a bit like, I go to at night. When it's night time, I go to sleep, and it's just all over again, it's finished.

Yes. So you don't really know when it happens if you're sleeping.

James' No. 'Cos I'll be sleeping, if I'm sleeping.

Keyworker' Sometimes did you say that you see funny colours? Do you want to repeat what you see sometimes, what kind of things you see. Can you remember?

James' It's where sometimes I see just lights, different colours.

Oh right. Is it that just before a seizure, or is it when you have a seizure?

James met his girlfriend at the youth club of the residential college they both went to.

James met his girlfriend at the youth club of the residential college they both went to.

Where does she live?

So she's not here?

Did she used to live here?

She used to be here yeah and I took her to the disco and I danced with her.

Yeah. How did you meet your girlfriend?

Okay. Yes. So if she's in a different college now. How do you see each other? Do you travel there?

What I do now is sometimes, if when it's like the end of the week and you're going home for quite a long time, then I sometimes go to her's and then mine, I travel there, so I can see her for a bit and play with her.