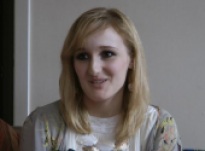 Age at interview: 22
Age at diagnosis: 14
Brief Outline: Fiona-Grace has experienced anorexia nervosa and binging and purging since she was 14. With a few inpatient admissions, she has gained most help from therapies based on mentalisation techniques. Also anti-depressant and anti-anxiety medication has been helpful.
Background: Fiona-Grace is 22 and a University student. She is single and lives with a friend. White Scottish.

Fiona-Grace describes herself being a “fussy child”, going through phases of not eating much at all, and also “anxious and perfectionist”. When she was eight, Fiona-Grace’s dad had a heart attack which then made the whole family more health conscious and aware of healthy eating. Fiona-Grace’s mum died when she was 10 and it came as a surprise to her. She says she learnt to bottle up her emotions and only went through the grieving and bereavement process some years later.
More serious issues with eating started around the time Fiona-Grace was 14. She had gotten a scholarship to go to a private school where the environment felt pressurized with many high achieving pupils. She also felt a bit excluded and lonely being the only student on a scholarship. Fiona-Grace describes wanting to lose weight because she felt anxious about growing up, getting periods and her body changing. Her head mistress took her to the school GP who referred her to an eating disorder’s unit, where she received cognitive behavioural therapy (CBT) and bereavement counselling. After 1.5 yrs as an outpatient she was hospitalised and she ended up taking her GCSEs at the hospital school.
Initially experiencing anorexia nervosa, Fiona-Grace later started binging and purging. The diagnosis was later changed to Anorexia Nervosa Binge-Purge type. In the following years, a few more hospital admissions followed, first with CAMHS (Child and Adolescent Mental Health Service) and later with adult services. Typically she would spend a few months at home then needing to go back to hospital. Fiona-Grace says that during this time, although she wanted to recover from anorexia, she also still wanted to lose weight. During her most recent admission, when she was sectioned, her mindset starting changing. She realised she can’t have it both ways and that she can’t get rid of anorexia and keep losing weight. She decided she didn’t want to lose anything more to an eating disorder and wanted to prioritise her future; to go back to studies, to be able have a career and maybe family one day.
Fiona-Grace’s says mindfulness and mentalisation-based therapies have helped her with anxiety and obsessions. She also says medication has been helpful, as well as having her family more involved in her care this time around. Fiona-Grace plays the guitar, the violin and sings - and music has always been great distraction and enjoyment for her.

Fiona-Grace says she was a fussy eater and an anxious child. Her mum died when she was 10 and her...

Show in context
SHOW TEXT VERSION
PRINT TRANSCRIPT
I was very anxious as a child and never wanted to do anything wrong and then I wanted to be the best at everything and I was always like very, very fussy about food and there would be times if I was upset about something that I would just wouldn’t eat and it was brought to the school teacher’s attention at one point but it just went through phases. I wasn’t at that age, I think it was when I was about seven or eight, I wasn’t focused about on calories you know, I didn't know about calories really.
I wasn’t aware of you know, the fat content of food but then my dad had a heart attack I think when I was eight and he was never overweight. None of my family are overweight or have been but he just, he had very high cholesterol because he could eat whatever he wanted and he didn't gain any weight so there were no warning signs and he was very active so after that the whole family’s diet changed and I was taught how to read food labels in the supermarket and I was told you know if it has this much saturated fat in it, it can’t go in the trolley. So I was taught kind of “these are good foods”, “these are bad foods” so that at that point I was very aware but it didn't go as far as for me to deny myself things but they just weren’t in the house, those things.
And then when I was, I can’t remember how old I was, but one of my brother’s has Crohn’s disease so he was diagnosed with that and again there is more focus on food and diet. And all of my family are very into fitness, you know a lot of them work in the fitness industry so they are all very pro exercise so I have been as well. And then when I was ten, my mum died so, I, it was quite a shock to me but not to the rest of the family because I wasn’t told that she had cancer until the day before she died. So I think that’s had a lot to do with my problems. And my siblings are all much older than me so I didn't have, you know, siblings my own age around to talk to about it so I didn't really have anyone to talk to so.

Fiona-Grace had an emotional relationship to food; when she was upset she would refuse food....

When I was upset I would just, I would refuse a lot of food I just didn't care about food when I was upset. I would go to school and refuse to eat school lunch because it was easier to get away with it at school than at home. ‘Cos they wouldn’t sit you down for hours and try and make you eat it. And then at home there would be a lot of times where I would just have to sit at the table for hours and hours and I would just play with my food, just chop it up into tiny pieces and move it around the plate and not eat it and then my parents would get incredibly frustrated with me and angry but that didn't really make it any easier.

Fiona-Grace was sectioned because she didn’t comply with treatment. Being detained made her angry...

Show in context
SHOW TEXT VERSION
PRINT TRANSCRIPT
I felt quite numb at that time just simply because my emotions weren’t there at all because I was so exhausted and, and I was dehydrated and just not very well so I didn't feel much then but it’s when, it’s when the treatments start that it actually gets hard when you have to eat, when you’re faced with fear foods, when you’re faced with weight gain ‘cos I think it was, it was as soon as I gained some weight that, that I really freaked out and at that point had to be sectioned under the Mental Health Act..so.
Do you want to say what happened, how did you end up being sectioned rather than wanting to go?
Well I wanted to leave for a start and I…
And was this kind of during the early days, like you said when the treatment started?
Yeah it was within a week and I wasn’t complying with the treatment because as soon as I gained weight, I refused to eat and I was getting dehydrated and my blood, my bloods weren’t very good. So I suppose they had to detain me to keep me safe and to feed me by nasogastric tube if they needed to.
In practice, how did the section work? Do they need two opinions, do you know or any of the details?
Yeah well there’s first of all, you’re put on a twenty eight day one. and for that I think all you need is a Mental Health Officer and a responsible Medical Officer which would be my doctor and then after the twenty eight days it’s reviewed as to whether it should continue or not and they chose to continue it to a six month compulsory treatment order so for that you do need two doctors’ opinions. I think it was a GP that was the second opinion.
And do you remember at the time, how did they tell you about this?
They were just very upfront and just came and told me and I was just so angry and I tried to run away quite a few times so was put under constant observations yeah.
Did you try to physically leave the building?
Yes I did on many occasions yeah
And you did, it wasn’t locked or you know, you went out?
There is a fire exit so I used…..
So what happened?
Well when you go out the alarms go off so people are immediately alerted that someone has left so I just had to run very quickly and get as far away as I could. And because, because, because I was detained and I was a specified person it meant that they could keep my money from me, my keys and everything but I always found ways to get my money because I would just have, at that point, I had this massive urge to go out and binge and purge so I would need money for food and I managed to go into the bank and I got some anyway just by answering the security questions and I always found a way and I even got a new key for my flat to access it.

Mindfulness reduced Fiona-Grace's anxieties and helped her focus on the present.

Show in context
SHOW TEXT VERSION
PRINT TRANSCRIPT
I did mindfulness I read a lot of books about mindfulness that were really helpful because that that was a bit of a fault of mine, I never lived in the moment, I was always living for tomorrow, so I think I learnt to be a lot more patient through doing that.
Can you tell me a bit more about more about it, what it means to you or?
To be mindful?
Yes.
It’s to focus on the current moment, like the now and to recognise how you feel at the time, what you’re doing at the time, not to think about what you’re worrying about tomorrow or what you’re about to do tomorrow because none of that matters at the time and that if you’re worried about something that’s in the future, if there’s nothing you can do about it right now, then there’s no point in worrying about it. So it was just so sensible and it just, it really helped to rationalise things and put things into perspective and to reduce my anxiety.

Fiona-Grace has been honest about her past experiences. She is not ashamed of having had an...

I’ve been a lot more honest this time with people and because I don’t think that having an eating disorder is anything to be ashamed of, you know, as much like, you know cancer or any other illness, there’s no shame in it, it’s an illness, and it’s not something that you’ve chosen to do. so I’ve been really honest with my friends and I’ve been like quite pleasantly surprised that they haven’t treated me any differently because that was my fear was that if I told people about it, they would just, they would treat me like a person with an eating disorder, like for example, if someone’s handing around some sweets, like they, they still offer me, they, even though they knew, even when I wasn’t well, you know, even though if I was gonna say no, it’s still nice to be treated the same as everyone else and not singled out. So my friends have been really good in that way, they’ve just treated me the same, yeah.