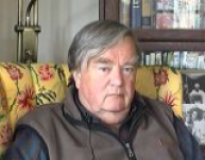 Age at interview: 70
Age at diagnosis: 63
Brief Outline: Harold was diagnosed in 2000. At the time of interview he was taking metformin and simvastatin.
Background: Harold is a retired teacher and clergyman, married with adult children. Ethnic background/Nationality: White US.

Harold was diagnosed with in 2000. He is married, has 2 adult children and is originally from the US. He is a retired teacher and clergyman.

Harold's father died from complications arising from type 2 diabetes. His sister also has diabetes, so Harold was not surprised to find out that he also has the disease which he says is a 'kind of family curse'. Harold also has high blood pressure, recurrent bouts of bronchitis, back pain and some problems with his feet. He is philosophical about having diabetes which he feels is part and parcel of his old age. Although losing a stone or two in weight would probably help cure his back pain, Harold finds dieting difficult because it means 'shedding an incredible amount of habit and ritual'. Harold found giving up smoking and drinking easy compared to trying to lose weight.

Harold takes metformin, though it upsets his digestion; he also takes simvastatin to regulate his cholesterol. He also has acupuncture which helps alleviate his knee pains.

Harold knows he needs to lose weight but feels that 'human nature' often gets in the way.

Harold knows he needs to lose weight but feels that 'human nature' often gets in the way.

View topic summary
SHOW TEXT VERSION
PRINT TRANSCRIPT
Yeah. So I recognise a lot of my difficulties would be solved if I could lose one or two stone. And I'm having difficulty with this because, not that I eat enormously, but at, past a certain age, losing weight takes special effort and dietary self-control and so far I just, my weight hasn't increased, but, for many years. But it, obviously the back problem has been coming on, because I was having difficulty standing for all day long in museums or anything some years ago and so I can just see.

And if you're someone like me who's been outstandingly healthy all his life and who has had very few operations for serious sicknesses that denial problem occurs, it's, you think oh well it'll go away. Or if you don't think that, once it gets a little better you think oh well it's gone away and frequently it hasn't gone away very far.

So I recognise that human nature being a teacher, both a teacher and a clergyman by experience I recognise that human, human nature is a very tricky business and that we're all in various times and states of denial about various things. And sort of, it's a very imprecise term but, but, but lets say you need to live thinking the glass is half full, but sometimes its, if it's only one tenth full then maybe you shouldn't think its that full and you, you need to take your, your , the things that are following you closely, seriously. And as you get past 50 and 60 there are a lot of things following you.