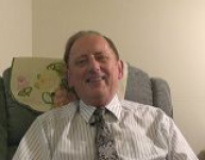 Age at interview: 69
Age at diagnosis: 62
Brief Outline: Brian's diabetes was diagnosed seven years ago when he was having prostate surgery. More recently he has been diagnosed with ulcerative colitis. He takes metformin and insulin (Novorapid and Levimir) for diabetes.
Background: Brian is a retired teacher who is single with no children. Ethnic background/Nationality: White British.

Brian is a retired secondary school teacher, living independently in a flat in a retirement complex. His diabetes was diagnosed seven years ago when he was in hospital for prostate surgery. The diagnosis shocked him, but at the time he worried more about the possibility of having prostate cancer. He was put on metformin whilst in hospital.

A couple of years later he went back to hospital because of bowel problems and ulcerative colitis was diagnosed. While he was in hospital for colitis treatment, his diabetes treatment was changed to insulin. He took insulin alone for a few years, and recently he has been put back on metformin in addition to insulin.

Managing the two conditions - type 2 diabetes and ulcerative colitis - is sometimes difficult for Brian; occasionally his consultants have given him conflicting advice about diet. Brian regulates his insulin dose according to his diet and says he knows how to manage his diabetes and attends regular appointments with his doctors. He leads an active social life and frequently goes abroad on holiday.

Brian has colitis and attends diabetes clinics at the hospital and the GP and says that the...

Show in context
SHOW TEXT VERSION
PRINT TRANSCRIPT
The hospital do an annual check. And apparently it's always near your birthday; I hadn't realised that till recently. And the GP, the practice nurse sees me twice a year, every six months. She just basically asks me how things are going. Sticks a stick in my urine sample. Doesn't have the sort of machine they have in the outpatients at the hospital. Because they have a wonderful little machine. They just put the stick in and it disappears and comes back and a whole screed of information appears on it - really impresses me, that, because I'm a man of the technological age. But the GP is basically just a dipstick they check for keytones and sugar. And they say automatically, you know, 'Well, you do know your sugar's high?' 'Yes.' Or, 'Your keytones aren't too bad.' And then they send blood samples off to the hospital.

In [city], the GP I don't see until I want to. There's no regular contact. The practice nurse, diabetic nurse sees me twice a year. The consultant sees me irregularly, but he's available if the nurse needs him. If the practice nurse is worried at all she can get me an extra appointment. I tend to go every three months to see the consultant. He has a good link with the surgery. Because within, I was going to say hours, but within a couple of days of him having me in to see him, he then has a report to my GP. And, especially if there's been any change in the medication, by the time I get round to contacting the surgery, they know that the medication has been changed and will provide it for me. So in [city], I mean I can't speak for other towns, but in [city] the service is extremely good.

Yes. I mean if it, if it blew up suddenly, I would possibly try to see my GP. And then he would possibly, you know, he, as I said earlier, not all GPs are fully conversant with every illness, they can't be, and as I say my GP isn't particularly conversant with diabetes. So he would either go along and see his colleague, who may be more conversant, or immediately get a link with the hospital and get an emergency appointment to see the consultant.

And it does work. I mean it's only happened once. But it, within sort of three or four days there was a phone call saying, 'Will you come along and see the consultant.' But usually the quarterly visits to see the consultant are such that he's got all the blood tests in front of him and all your, all his statistics, and a quick scan of his television screen and he can advise you how things are going.

Brian recommends the Diabetes UK magazines but generally prefers to get his information from his...

Show in context
SHOW TEXT VERSION
PRINT TRANSCRIPT
And finally about information. Where do you, it's quite useful for us to ask people where they get their information from?

Mainly from Diabetes UK bimonthly magazine. There's a lot of good articles in there, a lot of good letters. It's full of, no, it's not full of contact points, but it's got a lot of information over and above the physical diabetes. A lot of the adverts, for example one of them is always about how to get a pouch to put your insulins in to keep them cool when you're away on holiday and that sort of thing, if you don't have a fridge in your bedroom.

There are leaflets available at the diabetic clinic at the hospital. And twice the diabetic nurse has pulled stuff off the computer in her consulting room from another source other than Diabetes UK. The written word is nothing like as good as the spoken word, because with the spoken word you can have a rapport. If you're just reading a piece of information you take it in, but Confucius, he say, 'What I read, I forget. What I do, I remember' or something. And I think it's true with reading. I think somebody worked out you retain 5 per cent of what you've ever read.

Yes. And the great advantage of the, of the written word is if, at a later time you can go back to it to refresh yourself. Whereas the spoken word has gone unless you have a tape recorder or a video camera. But not many of us go into the consultation room with a tape recorder.

Brian does 5 injections a day and explains how he remembers where to inject.

Show in context
SHOW TEXT VERSION
PRINT TRANSCRIPT
But I know the hospital always keep saying to me, you know, 'How are your injection sites? Are they painful?' And they never are, fortunately. The stomach one I have to be care-, the night one. Because it's 12 o'clock, 1 o'clock, 2 o'clock in the morning, you can be a bit forgetful. I have to work out what date it is. And if it's an odd date I do it on the left-hand side, because 'odd' and 'left' are short words. If it's an 'even' date it's a longer word, so I do it on the right-hand side because it's a longer word. So I do either side of the navel with the evening one. And the day ones, there are four in the day, I tend to use one leg for about a month and then I swap over to the other leg, just to keep it even.

In the same place?

Well, it's about the size of a loaf of bread, small loaf of bread area, which I'll stick it in somewhere. And we're quite happy.


Brian now wears hard-soled shoes around the house so that he doesn't damage his feet.

Show in context
SHOW TEXT VERSION
PRINT TRANSCRIPT
Neuropathy. They do test for that. And there's a little bit of loss of feeling, but not a great deal. I'm very conscious of the fact the feet need to be looked after. Because they've warned you that if you wander round your flat or anywhere in stockinged feet and you step on something sharp like a nail or a pin, if you're losing the feeling in your feet, you could step on it and not know, and it could go septic. So I always wear hard-soled or strongly soled shoes in the house. Never go anywhere barefoot, apart from stepping out of the shower onto a bathmat and then straight into slippers.