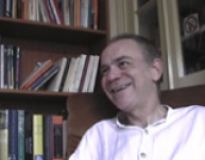 Age at interview: 49
Age at diagnosis: 37
Brief Outline: The most helpful approaches for him have included getting rest, counselling, lifestyle changes (involving moving to a better community and living on less money), spirituality and partner support.
Background: Is a gay man living with his partner. He has had a number of major episodes of depression. He has experienced difficult work environments as well as homophobic violence.

His counsellor supported him without setting the agenda, helping him to make his own decisions.

His counsellor supported him without setting the agenda, helping him to make his own decisions.

View topic summary
SHOW TEXT VERSION
PRINT TRANSCRIPT
He was, I suppose, my age maybe, maybe a bit older. But he was balanced, objective and supportive in the ways that I felt I needed at the time.

And what did you get out of that counselling?

A return of self esteem, I think is the biggest thing. But that is one of the real big issues with depression anyway isn't it? He helped me and supported and encouraged me without laying down an agenda which again I think is how it should be done. He helped me get my head around things and make my own decisions.

And it was largely with his support that I did go back into work again. I left the career in IT and some fifteen, fifteen months afterwards, I was out of work fifteen months. I returned to work as a college lecturer, teaching management. So although it was a black time in some ways, I think the blacker times were before the diagnosis.

After the diagnosis, [pause] I suppose I just had a break, a rest, I don't know what the term nervous breakdown means, I don't think it is clinically valid, but I do know what burn out is and I think it was burn out. And serious mental exhaustion that had been brought on by long term exposure to shitty workplaces. And you need time to recover from that kind of emotional damage.

Argues that you have to be yourself, and live your life according to your own values, rather than...

Argues that you have to be yourself, and live your life according to your own values, rather than...

Why is it important to sod other people's opinions?

Well, whose life is it? You've got to live your life according to your morals, principles, likes, preferences and the rest. And it's your story. You do what you like so long as you're not hurting, offending and upsetting other people. But how many people do we all know who live nice protected lives because their parents expected of them, because peer group pressure, because everybody in this village behaves like this. Well sod that.

Otherwise you might end up living someone else's life?

You live someone else's life. It's coat hangers isn't it? Sorry you're not going to put me on the coat hanger. I can stand on my own. And if I don't like a particular job, I'm not going to do it. If I don't want to live in a tiny village in rural [area name], I'm going to move. You can do these things. Takes a lot of courage, determination and planning and thinking through and resourcing. Hey, where are we going to get the money from to move. You make your own destiny.

As a Catholic gay male, his Christianity has been a great source of comfort, and he has never...

As a Catholic gay male, his Christianity has been a great source of comfort, and he has never...

View topic summary
SHOW TEXT VERSION
PRINT TRANSCRIPT
But yes, my, my Christian faith, which I've had for, you know well, since baptism of it in practise.  It has come into play more when things have been black with depression and all the other unhappinesses. And it's been a great source of solace because I believe personally that the love of God is there and unchangeable and never goes away no matter what I do. He made me like this. He knew what he was doing. He made me and he loves me. I get myself into scrapes. Other people get me into scrapes but at the end of the day, he is always there.

And to take that one stage further although as a gay man the Catholic Church isn't, is not in favour of homosexuality and views it with some rancour, and views it as a sin...  I have never ever had condemnation direct or implicit from a priest or any congregation in any Catholic Church I have ever worshipped in. Far from it, one priest in particular, no in fact all of them in their very different ways from young men to, to much older men, have all of them in their ways been very loving and caring and supportive both to me and my partner through the bad times as well as the good. And yes, they've been very loving and very caring in the ways that I think our Lord would have expected. And the cant and hypocrisy of those who condemn, who condemn the sinner out of hand particularly some fundamental religious groups, I think is just appalling.

Was bashed because he was gay, and was diagnosed with post-traumatic stress disorder. The...

Was bashed because he was gay, and was diagnosed with post-traumatic stress disorder. The...

View topic summary
SHOW TEXT VERSION
PRINT TRANSCRIPT
I don't know why, but I've been the victim of gay-related violence over the last fifteen, twenty years on very odd occasions. It's not just a physical violence. I think it's the other violence that gay men and women like, just like black people and other minority groups experience. The prejudice is a form of violence and I do feel that strongly about it. People's antagonism, their ill feelings, the snide remarks in the workplace they cause pain in the same way a smack in the jaw causes pain. It's not the same pain but it is still pain. And it's... of course it's still unacceptable and I think once you realise and tell yourself, and tell other people that this is unacceptable, that's a good step towards being able to handle it. But as well as the shitty and unpleasant conditions in the workplace that I've suffered then clearly very much the gay bashings and the aftermath of that have contributed to my depression. Looking back I think they have prolonged it. Not [pause] not made it worse, I can't see how you can quantify that, but they have certainly extended and protracted the bad days and they've also realised that I am also suffering from post-traumatic stress disorder. And that has been diagnosed by the GP. And again, just to see that in black and white on the medical certificate is somehow strengthening.

Because, very often with depression you think, oh it's my fault, I'm inadequate, I can't get, I can't do this. It's not that, you're suffering, one is suffering from post-traumatic stress disorder because some other twat out there has thumped you.