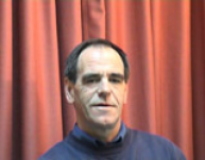 Age at interview: 68
Age at diagnosis: 57
Brief Outline: He had sympathetic doctors who took the time to listen. With medication, early retirement, his religious convictions, and the gradual resolution of life stressors, his depression lifted.
Background: A retired married man whose depression came about in 1995 after a whole range of life stressors (e.g. increased workloads, loss, increased family demands). It took 4 years to overcome his depression. (Played by an actor.)

Just before he became depressed he lost family members, there were workplace changes, and members...

Just before he became depressed he lost family members, there were workplace changes, and members...

View topic summary
HIDE TEXT
PRINT TRANSCRIPT
In 1995 my wife and myself, we had the death of a parent on each side of the family, that was early 1995. In fact, we buried them within a fortnight of each other at [local] crematorium where we both hale from near that area. Where I worked in an office at that time, and it was a time of great change. A lot of people left the company weren't replaced, and the rest left behind really had to take up the slack and try and do their duties as well.

During the course of 1995, we had my father-in-law move in, we both felt, my wife and me, that it was'. it was right he should come and live with us. He had no other family connections where he was, and he was an elderly man who we had a lot of respect for. And that meant we had to move house to accommodate him, to have a downstairs bedroom and a downstairs toilet. So that all came about within five months of both parents dying.

And then soon after, I think it was possibly early October, my daughter and her son who was a babe in arms suddenly turned up on the doorstep, and she said, "Our marriage is over, please can I come and stay with you?" So from just being two of us, there was five of us about four different generations living here.

Explains that some members of support groups report 'pockets' where doctors are not very...

Explains that some members of support groups report 'pockets' where doctors are not very...

View topic summary
SHOW TEXT VERSION
PRINT TRANSCRIPT
We used to get, I suppose seven, eight, nine, round that sort of number to our depression support group. At one time we had a couple come in from [remote area] which is quite a way away because the facilities over there were poor they said. And they said that their doctors weren't very sympathetic and helpful.

Now I've heard that once or twice. It may have changed, it may have changed Damien since I had it, but I've heard that once or twice from people, and I can only say how fortunate I am to have had the excellent support I had from my doctor'. For me the most important thing was sympathetic helpful people. Doctors in the first instance, who were prepared to accept what it was'

From my experience in the support group many people did not get sympathetic doctors in their life, and I think for some of them they were, thought they were malingerers or told to pull yourself together, everybody gets this sort of thing.

A self-help group discussed concerns about St John's Wort. (Played by an actor)

A self-help group discussed concerns about St John's Wort. (Played by an actor)

View topic summary
SHOW TEXT VERSION
PRINT TRANSCRIPT
Another thing when we were there, St Johns Wort was very much under the microscope. And we learned that if you're taking it [St John's Wort] with ordinary medication it can be quite dangerous. It can negate anything else or complicate what you were taking. So we had to keep playing the mantra, 'If you try anything, you must consult your doctor before you do anything, don't take any, don't just think well I'll reduce this existing medication and I'll take some St Johns Wort because you could make yourself worse.'

He takes tiredness as a warning sign that his brain needs a rest, so he ensures that he gets more...

He takes tiredness as a warning sign that his brain needs a rest, so he ensures that he gets more...

View topic summary
SHOW TEXT VERSION
PRINT TRANSCRIPT
I have to say its not often now that I get...it's not often now do I get an experience which indicates to me that I'm going to lapse back into it. I'd no history of depression before this came along. If I find myself getting very tired, I take that as a warning'Well I think you see, if your brain has had a battering, it needs time and rest to recover you know. If you're awake you're not resting it, and I think that's what happened, I think you know this detachment, the brain was saying, 'I've got too much overload I want to chill out', as it were, "I want, I want 'out' of this", you know.

A combination of Incapacity Benefit, pension and an inheritance, meant he had enough to retire on...

A combination of Incapacity Benefit, pension and an inheritance, meant he had enough to retire on...

View topic summary
SHOW TEXT VERSION
PRINT TRANSCRIPT
The Incapacity Benefit I got plus my occupational pension enabled me to get by'. my father left us a little bit of money, which enabled us to pay off our mortgage so we didn't have to pay the mortgage here, and also we were able to have the conservatory put up, you know that paid for that. So you know, there was a lot to give thanks for within reason.

I suppose a disappointment for me was, in a minor way, having to leave work in the circumstances that I did. I've hardly seen anybody from work since I left, I suppose I was in a bit of a state, I suppose, they were perhaps embarrassed by me, I don't know, I don't know. I've not seen many people from work, and it's not that far away.

But somebody once said to me when you leave work, you're forgotten in a matter of hours or so! Somebody else said, 'As long as that, I thought it was twenty minutes!

As a Christian, he feels that all events have reasons, including depression, even if the reasons...

As a Christian, he feels that all events have reasons, including depression, even if the reasons...

View topic summary
SHOW TEXT VERSION
PRINT TRANSCRIPT
As a Christian I believe there's got to be a reason behind everything and I don't know, I don't know, I haven't got to the bottom of that yet, and it may be that I won't. I thought originally that possibly I was, I was going to be used to help other fellow sufferers. Well, I started off on that track, but when it' sort of had to fall off'. I don't know, I haven't yet found the reason for me having the depression, but I don't fret over it, I think there has to be a reason.

Explains that prayer and God helped him in ways that are unclear, yet he feels it at least helped...

Explains that prayer and God helped him in ways that are unclear, yet he feels it at least helped...

View topic summary
SHOW TEXT VERSION
PRINT TRANSCRIPT
How has prayer helped, well I guess that as I say, the Lord had a purpose behind me having depression, and I was content. It didn't make sense to me because, well it just didn't make sense to me, but I had to believe that was it. I used a psalm, Psalm 100, when I was going through the worst of it.

Well you'd have to look it up in the Bible, but part of it says the Lord is good, his mercy is everlasting, and his truth endures to all generations. And I had to believe you know, there was always'. there was always something to give praise, for and give thanks for, because you get exceedingly gloomy [laughs]' you're not very good company when you're in the depths. But I had to believe that, and that may'. I think that it helped.

I don't know, I can't say if I'd have been any different without those beliefs. Certainly it kept me and the wife's marriage together, I believe that. So I give thanks for that.

Says people with depression should hang on during the worst of depression because things are...

Says people with depression should hang on during the worst of depression because things are...

View topic summary
SHOW TEXT VERSION
PRINT TRANSCRIPT
Right well, I suppose the thing I would like to say is hang on in there, hang on in there. Most people, and I stress most people, do recover from depression. Of itself, it doesn't appear to be life threatening. But of course it can lead you to you know self harm if you so get that far along the line. But if you cling on to the thought that most people recover, and that you will get better. But it may take time, and I think I would just stress that you need hope, you need hope that it's not the end of the line for you.

You very likely will get better but you need time. And you needn't be too hard on yourself and think that you're a failure and you've got it all wrong... you cannot see the end because your circumstances are such that you're locked into this cycle of hopelessness, you can't function, your brain doesn't function, and you can't believe then that you're going to be okay as a human being, in which case you've just got to hang on.

It's lovely if you've got the support and encouragement of those around you, but you're not necessarily going to get that, and we needn't pretend that you will. But as I say most people do get better with depression.