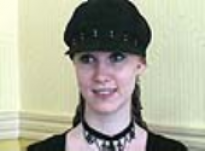 Age at interview: 19
Brief Outline: Francesca started experiencing depression when she was about 10 ' she was badly bullied in school and a young carer. Francesca starting doing solvents and other forms of self-harm and has also been suicidal. She's also been hearing negative voices. When she stayed in a psychiatric unit, she met 2 girls who've been really close friends since. Francesca says she can't understand people who criticise those who have mental health problems. (White British).
Background: See 'Brief outline'

Francesca started experiencing depression around the age of 10. She was bullied in school and she was also a young carer for her mum at home. The bullying got so bad that she was taken out of school and then became a fulltime carer. Around this time, Francesca started self-harming and also inhaling solvents and aerosols. She took her first overdose when she was about 13 and has done a few more times since, both when in and out of hospital, “to punish myself”. She says self-harm and suicidal tendencies were her way of trying to control her life, or to punish herself for feeling “too happy”.
When Francesca was 14 she started hearing voices and seeing “imaginary friends” - this “scared the hell out of” her. She was referred to CAMHS and admitted to hospital. She was really “paranoid and scared” to go in to the psychiatric unit because she feared people would hurt her. In the end, it turned out to be a good experience because of the people she met while she was in.
At the psychiatric unit, Francesca met Mandy (see Interview 11) and Sian (see Interview 12). The girls developed a very close bond during the months they stayed in the same unit and have stayed friends ever since. They stay in touch regularly and refer to each other as “sisters”. They all say that getting to know each other was the biggest help they got, both in and out of hospital. During their stay in the hospital, the girls got to know each other’s moods, knew when to support each other and when to leave each other have the space to have their own time. They say they “kept each other sane in the most insane ways”.

Francesca says she’s had very abusive relationships with different people throughout her life and because of it, has “huge trust issues”. She says she’s still learning to love herself. There are three things that help her; music, friends she can trust and talk to and her little niece, for whom she wants to stay sane and safe. Francesca is “baffled” as to how other people, even strangers, can judge her or her friends because of their mental health problems and says “we’re actually quite random, bubbly, crazy-in-a-nice-way-girls”!

For more from Francesca see her Group Interview 11-13.

Frankie had MRI and EEG scans first to check there was nothing physically wrong with her.

Frankie had MRI and EEG scans first to check there was nothing physically wrong with her.

View topic summary
HIDE TEXT
PRINT TRANSCRIPT
So when I was 14 I was referred to CAMHS which is the Child and Adolescent Mental Health service people, and I was referred to a psychiatrist who did an assessment on me. And she couldn’t actually diagnose me. So I was then referred to a psychologist who also couldn’t diagnose me. So I had to go the hospital to have like MRI scans and EEG scans to check it was nothing physical. They found it was nothing physical so then the whole idea of going to a psychiatric unit was brought up. Because my psychiatrist decided to nicely tell me she thought I was psychotic [laughs]. So, so I was like really scared, I was thinking, “Oh my God what’s wrong with me?”

Frankie was a young carer from an early age to her mum who had depression. She herself felt...

Frankie was a young carer from an early age to her mum who had depression. She herself felt...

View topic summary
SHOW TEXT VERSION
PRINT TRANSCRIPT
Where to start? Okay, started feeling like general depression and stuff when I was about 10, getting bullied in school. My Mum had depression as well which had like a big impact on all the kids, like me and my sister, we were young carers for my Mum. So basically any issues I had weren’t dealt with. I had to deal with them myself, or my sister had to help me deal with them. Yeah, went into secondary school, got bullied quite a bit. Ended up being taken out of school because of it. So I was more of a full time carer for my Mum at that point. Because I was out of school. Started sort of not necessarily like self harming, started doing solvents and stuff, round the end of my garden and like inhaling like aerosols and stuff like that. Tried to, I took an overdose didn’t do anything. Didn’t take that many tablets but you know, and then yeah, from like the point of like 11 on, up until I was about 14 I just basically got on with my day when I was feeling depressed and stuff, like looking after my Mum and stuff didn’t quite realise how much it was affecting me because I just sort of put it to the back of my head.
And then when I was about 14 started hearing voices which scared the hell out of me. And started like seeing things, the imaginary friends, and at that point like I basically sat in my Mum’s room with her and basically told her everything about like what had happened in my life and what she’d missed out on, and you know the fact that she hadn’t picked up on the fact that I was depressed. I knew that had had like a big impact on me, I’d not told her about like the solvents and stuff because I didn’t want to upset her too much.
Previous Page
Next Page