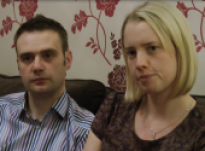 Age at interview: 32
Age at diagnosis: 31
Brief Outline: Joanna's first daughter was delivered by caesarean and she was told she could try a vaginal birth after caesarean (VBAC). She went into labour at home, 9 days overdue. She had a uterine rupture which was undiscovered. Her baby died in utero and was delivered during surgery to stop the haemorrhage.
Background: Joanna is a medical sales representative, married with one daughter. This was her second pregnancy. White British.

Joanna had an emergency caesarean section when her first daughter was born. She had found the experience of her first caesarean so bad that she was keen to avoid having a second so was enthusiastic about a vaginal birth after caesarean (VBAC). During her second pregnancy, she was under consultant and midwife led care and it was quite late in the pregnancy that they were told that she could try for a natural birth. In October 2009 she was about 9 days overdue when her contractions started naturally at home. There was a point when in addition to the contraction pain, she experienced a searing pain, as if she “had been stabbed” and she asked her husband to get her to the hospital as quickly as possible. She now interprets this pain as the rupture which later caused her haemorrhage, but she will never know.
Once she arrived at hospital (late Sunday night) and was examined, the midwives told her that she had not even started dilating. They monitored her for a while, then stopped. In extreme pain, not knowing what to expect from a natural birth, and tired, she was given paracetamol and Temazapan to help her rest. No one took or looked at her notes. She dozed through the night. She woke in the early morning covered in sweat feeling simultaneously hot and cold and asked her husband to get the midwives immediately. In the next two hours midwives and consultants (obstetrics, anaethesia and radiography) established that the baby had died and she was haemorrhaging massively inside (there were no external signs of the bleeding). She was told that she would have to deliver the baby, but was too weak to even contemplate it. The baby was almost 10lbs, almost 3lbs larger than her first baby. This was not picked up on, but could have contributed to her tear. She says now had she known how big the baby was she would have pushed for a caesarean section. There were disagreements with the consultant about her due dates and therefore how overdue she was.
When they realised she was bleeding internally they took her into theatre. Her husband refused to leave her and stayed with her, and the baby, throughout the operation. The operation lasted about half an hour and then she was transferred to recovery and then a high dependency unit. They were allowed to keep their baby daughter with them for a couple of days before she had to go to the morgue. She was discharged on the Thursday. She had a six-week check with the consultant who she found unsympathetic and they have had to chase the internal investigation several times. They had a meeting with the head of midwifery and others to go through the report that they had written (which identified several mistakes at various stages) but there has been no contact since, at the time of the interview .

Joanna’s baby was stillborn after she had a uterine rupture. A year on, she and her husband feel...

Joanna’s baby was stillborn after she had a uterine rupture. A year on, she and her husband feel...

So I think I’m right about that kind of, that stage now, because you just, you go round and round in circles with it, because you’re trying to fix it and you can’t so…. You know, you are where you are and it’s never going to change. And in the early days you spend all your time going over it in your head, thinking, and believing that if you do something different, it will all be different now, and just sounds really bizarre when you say it back, but you think that somehow you’ll wake up one morning and it won’t be, that you’ve managed to replay it the right way in your mind, all that thinking about it, and now I just, you come to the point where you accept it I suppose. And you just say, “There is nothing that I can possibly do now to change it. I just have to live with it.” And that’s what, where we are isn’t it? And you know, you think you’re never, ever going to smile or laugh or anything again and then you know, you do don’t you? It didn’t ever mean that it goes away…. yes, but we do, and we, I sort of enjoy things, and things now. But, yes, its, I like to think about it now, is that it’s like disbelief that any of that happened to us isn’t it. You know, it’s like the day before our wedding anniversary as well, so it’s kind of … yes, just tied up in all that sort of emotion as well, so…but, yes.

Joanna said that the physical scars she has from the caesarean are associated with an “emotional...

Joanna said that the physical scars she has from the caesarean are associated with an “emotional...

SHOW TEXT VERSION
EMBED CODE
PRINT TRANSCRIPT
I feel, like I say, scarred by all the physical things that have happened to me, and like whilst I feel, you know, that I went, as soon as I could, I started exercising and losing weight, and you know, and I know I’ve done really well, to get where I am, was, and again all that effort went in, because I thought we’re going to have another pregnancy in the future that I want to be in the best shape that I can be to cope with it, just in terms, of just the stress and then obviously the physical strain. If, if it might not make any difference whatsoever, but if I feel physically stronger, it might just help.
And so although I’ve done really well, underneath all that, I’m hugely scarred and whilst that doesn’t matter to people who think, I, you know, was sort of mad for complaining about my, my stomach, my scarring, you know, amongst everything else, and actually it isn’t the most important thing in the world. It does affect how you feel about yourself. So it has probably been a bit of an obsession, but then that, that was probably whilst I didn’t go back to work, and Mike was off working and things, that was the thing that was my focus for the whole of this last year, is you know, eating right, exercising right, and that was kind of my life until I’ve gone back to work.
When you say scarred, you don’t mean just physically scarred do you? Or do you mean just physical scars? You worry about at all?
Physical scars that are just associated with huge like memory, like emotional scarring as well I suppose. But yes, definitely physical scars from just having a caesarean, to having like a massive baby, to carrying like a really big baby.

Joanna and Mike were very disappointed by their hospital after the death of their baby. They had...

Joanna and Mike were very disappointed by their hospital after the death of their baby. They had...

View topic summary
SHOW TEXT VERSION
EMBED CODE
PRINT TRANSCRIPT
Mike' The meeting was basically presenting us with the findings of their investigation of which we had to read during the meeting. And we critiqued as being incorrect. There was a lot of things in there that the head of the midwifery services hadn’t realised. For example the notes, you know, me telling them that notes hadn’t been taken until whatever time it was. And she didn’t know that. And that wasn’t in the report.
And there was a big discussion wasn’t there about us, because as I said we’re a year, not a year, we were five months down the line.
Joanna' Hm.
Mike' Five months down the line, and I basically said, “Well no one’s spoken to us.” And I again, coming from my experiences in the police force, if there’s a murder first people you speak to are the witnesses. This was a dramatic life changing event, but recall is pertinent from those people within a certain time frame. You know, the police call it the golden hour of investigations. And I said, “Well we’re five months down the line, and no one has contacted us to ask us how we felt things went on that night, and what was chronological order.” And they kind of looked stunned by that really. Because if they can’t do that, it’s an internal investigation in relation to the midwifery care and the consultants and stuff like that. And my point was, well actually none of that matters if you get it wrong, you know, there were two of us in that room at the time. Me as an independent person, Joanna was the one who had had it done to her, and the midwife who was doing it. And it was kind of left, “Well can you provide us with statements based on what happened.” Of which we said we would.
Joanna' We did. We said, you know, that we would do that, and then at the time, it was kind of the end of February, and you know, I think we came away. We’d just, we’d lost a little bit of our fighting spirit. And we just had no energy left in us to do it, and we went on holiday didn’t we? And we decided, we booked a last minute holiday and we said we’re going to go away, and then, then we just, we just had this massively busy period in our lives, and you’d just kind of got a new job hadn’t you, and time started to tick on. And during this time…
Mike' There were other things as well wasn’t there, because basically up until that point I think, I’m always the type of person that thinks the glass is half full, and after reading that report I realised actually there were a lot of failings. And I hadn’t even contemplated any type of legal action until that report, and I came away from that hospital completely deflated after that meeting and basically commissioned a solicitors firm to look into it.
So I kind of had the attitude coming from that meeting yes, it was basically, ruined our life and everything else, but I came away from that saying, “Why should I?” “Why should I now produce a statement for them, when they haven’t given us the consideration that we deserved from the beginning, and secondly the report they’ve written hasn’t even taken into consideration any feelings we had.
Joanna' We just got incredibly frustrated.
Mike' Yes. We’d never supported that report.
Joanna' And to this day we haven’t heard any more, anything at all from them.
So you’ve had no follow meetings?
<
Previous Page
Next Page