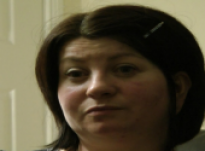 Age at interview: 41
Age at diagnosis: 35
Brief Outline: After an easy pregnancy with her fourth child Deborah was hoping for a water birth. When she was 12 days overdue Deborah went into hospital for induction. During labour, her son suffered hypoxia and died.
Background: Deborah was pregnant with her fourth child. She is married and had three previous children. White British.

Deborah’s baby was stillborn. He suffocated due to lack of oxygen. Deborah and her husband arranged a post mortem and sued the hospital for negligence. Although Deborah herself suffered no complications during the labour, she did develop post traumatic stress disorder (PTSD) a year or so after the birth partly as a result of the research that she had done about her labour. She felt that her life would have been in danger had she developed any complications, as she was cared for so badly no one would have noticed.

Deborah's baby was stillborn. She was put in touch with a bereavement midwife who offered her...

SHOW TEXT VERSION
PRINT TRANSCRIPT
At what point did you see the bereavement midwife?
She came in probably pretty early on. A few days, and she was absolutely fantastic because she arranged the funeral with the funeral home. We didn’t want the hospital concerned to have anything to do with it, they wanted to take over and I said, “No, thank you.” And she arranged all of it. Even having my son picked up from a major hospital after having his post mortem. The lady from the funeral home went and picked him up. And, and she was absolutely brilliant. She really was brilliant, but again bereavement midwives are very far and few and between and a lot of places are cutting back, even more so now, saying you know, they need to have, just, just be solely in the hospital and have one visit at home, but actually no. Again it’s just not investing in people.
How often did you see her?
I saw her probably once a week for the first few weeks. I can’t remember exactly how many, and then it went to monthly. But like I say we’re still friends now and she was involved with my conference in May. She’s a really, really lovely person, and just understanding. And even getting things like, when a child’s still born you don’t get a birth certificate. You only get a death certificate and as a Mum that’s really awful. So she got that sorted out and she got somebody who volunteered and did calligraphy and they got a birth certificate.
And I know as well that babies that are late miscarriages they’re not entitled to a birth certificate either. Which when you’re 23 plus weeks and you don’t get a birth certificate when your child is born “prem”, is pretty horrific, pretty horrific.
She was able to sort that out for you?
Yes. And also the scan photos getting them put onto paper, other than the bromide, because obviously the bromide fades after a while. Just things like that, really helpful and supportive. And much needed, because I hadn’t, that’s the only thing I have now of him is, is you know, his little hand prints, and his foot prints and, and they’re really important.
Did she offer some counselling as well do you think or was it more the sort of practical, practical side of it?
It was practical, but I mean she listened. And she understood as much as somebody can understand that hasn’t gone through it. But yes, she listened. And she was caring and you know, she did really care. She was lovely, yes
Previous Page
Next Page