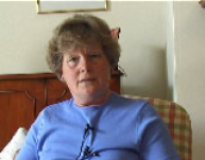 Felt she needed face to face contact to fill in information gaps about her colostomy.

Show in context
SHOW TEXT VERSION
PRINT TRANSCRIPT
I was given a booklet which was entitled, if my memory serves me correctly "Living with a colostomy",  which was a general book which I think would have been used for people who were having a permanent colostomy or having a temporary colostomy, as mine was.

So that explained about a stoma care nurse and about the services that were available for taking away any items of bandages or dressings and that type of thing. That was a general booklet which was helpful.

I didn't need bolstering up about the operation, I think I really needed an explanation of what was going to happen. That would have helped me more I think.

She needed advice about how to adapt her vegetarian diet after surgery.

Show in context
SHOW TEXT VERSION
PRINT TRANSCRIPT
I would say that the legacy of my bowel cancer and cancer of the rectum is that I needed help with what to eat and probably the most difficult thing for me, through all of this, was eating in the early days when I was home. By early days I mean in the months afterwards because I'm a non-meat eater the food that I rely on, the food that I eat is high in fibre and I really needed lower fibre and perhaps higher calorie.

And of course when you're shopping everything is aimed at being high fibre and low calorie, but really I needed the reverse.

And I, I then went to a dietician who helped me to beef-up my meals without making them higher in, in quantity and volume, it was just worth more. And she gave me several ideas for how I could beef-up my meals.

One example  which was so simple and so effective  I in fact, if I were having milk on cereals was to add powdered milk to my milk so that meant that I didn't have to actually have an intake of the higher quantity of milk, but what I was taking in was of a higher value and it was worth more. So, that was one way, and if I was having a yoghurt, I would add some powdered milk to that, mix it in and it didn't taste at all, and it wasn't difficult.

She describes her colonoscopy.

I think, I think I was fairly well prepared for that, um I, I did not enjoy the days leading up to it and it isn't a very pleasant experience, to have to clear one's system.

How do you do that?

I was given sachets of, of a, a liquid to mix, a drink to clear my system and that is, I think, uncomfortable as time goes on, but I think I was reasonably well prepared for that.

Everybody was very kind, I was very sore this time by the time I had cleared my system.

Is that so they could see different angles?

No, I think it was weird. I think the feeling was weird and I think I felt, I felt a little out of control when I was being moved on a bed and I felt a little bit strange, it was a bit like being on a fairground ride I think, but not a very pleasant one. I don't think that bothered me particularly.

So, and I think again, when I think back to that period of my life I think I was quite glad that somebody was taking seriously something that was worrying me.