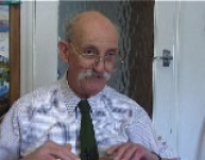 He describes his classic symptoms and his GP's response.

Show in context
SHOW TEXT VERSION
PRINT TRANSCRIPT
Well one summer evening I was out in the garden and I felt a wetness in my underpants which seemed a bit strange. I came in and there was a redness there which looked like watery tomato sauce.

So I thought 'oh I must have piles'. But on inspection it wasn't piles and it seemed a bit strange, but anyway that was that.

Then, later on I had stomach pains and a lot of wind and I was going to the toilet but nothing was happening and then I had another lot of, from the back passage and it was all mixed with up with wind and pains and all that.

Anyway I then, this went on more and more, I soiled my pyjamas twice, I was up in the morning very early, went to the toilet, more of this redness which looked like blood.

I went to the doctors, he gave me an immediate examination of my back passage, confirmed a haemorrhage caused by a possible tumour and filled in a form for me, and it all went from there.

Describes the burns he developed from radiotherapy and how he dealt with them.

Show in context
SHOW TEXT VERSION
PRINT TRANSCRIPT
Well that's absolutely painless when you have it. They mark where they're going to put it with a tattoo and then they find that point every time.

But towards the end of that of course it burnt all my skin off and I was raw and I was told when they said like you've had enough of that to go home, find an old bed sheet and make a poncho so you could hang it off your shoulders and not rub on your body.

How long did it take for the burn to heal?

Was it very painful?

Well I mean it was like lying in the sun and having heavy sunburn and all your skin falls off you know. It was yeah it was quite sore. It's all part of the treatment though isn't it really, yeah.
Previous Page
Next Page