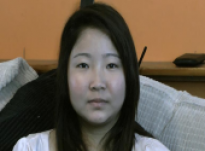 Age at interview: 17
Age at diagnosis: 16
Brief Outline: Ruby has to take steroids as part of the treatment for lupus. However, the steroids cause a thinning of the bones and the trial is to see which medicine is best that prevents this from happening. Ruby does not know which medicine she is taking.
Background: Ruby aged 17, is Chinese, lives with her parents, and goes to a local high school. Ruby was diagnosed with lupus at the age of 16 and soon after was invited to take part in a randomised placebo controlled drug trial. Ruby agreed to take part and is still in the trial.

Ruby is 17 years of age, Chinese, lives with her parents, and attends a local high school and enjoys playing badminton. Ruby was diagnosed with lupus at the age of 16. Soon after she was diagnosed Ruby was invited to take part in a clinical trial. The research nurse at the hospital approached Ruby and gave her lots of information about the trial to read at home. The nurse also talked to Ruby about the trial and what it involved.

It was explained to Ruby that she would be randomly selected to take one of three drugs and that she would have to take this for one year. One of the drugs was a placebo. It was also explained that she would be monitored throughout the trial to see how she was progressing and make sure everything was okay. Ruby had plenty of time to make a decision, and discussed it with her parents.

Even though Ruby would not know which drug she was taking, she was happy to take part in the trial to help others who may have to take steroids in the future and to help her too. When Ruby has her regular hospital appointments, she has blood tests and a skin thickness test. She also completes a questionnaire that asks about how her health. However, she says doing these things doesn’t take up much time and she would have tests as part of her treatment for lupus anyway. Everything is done at the same time as her regular hospital appointments although it is difficult to know which tests are part of the trial and which are part of her normal care.

Ruby is supportive of clinical trials in young people.

Ruby took part in a randomised placebo controlled trial on finding the best treatment to prevent...

Ruby took part in a randomised placebo controlled trial on finding the best treatment to prevent...

View topic summary
SHOW TEXT VERSION
PRINT TRANSCRIPT
Well, I was diagnosed with lupus when I was 16, nearly 17. And then, from then I got asked, because I was put on steroid tablets, I was asked to, to do this POP study because steroids thin the bone, I think. And then the study is to see if any medicine could help to stop that happening. So I was asked to join that. And then from there…
It would be interesting to know who asked you and what information they gave you at that time?
The, a nurse came in to ask me, I think, and then she told me about the POP study, what it was about. So it was about like trying to un-, not thin the bones, stop, stop the steroids from thinning the bones. And then, yes…
Yes. They told me there was three drugs that they were testing and that I was going to be randomised to one of them. And then, from then I’d have to take that drug for a year. But I could stop if I wanted to.
So they give you an opportunity to withdraw?
Yes.
So there were three drugs?
Yes, I think three.
Did they explain what the drugs were or, if they’d been trialed before?
They’d been trialing them for like five years, I think. And then, yes, they just explained that, what the different drugs were, but they didn’t exactly say properly what they were. But they were just like to try and help test the thinning of the bone.
Did they use a term like placebo at all?
Yes, they said one of them might be a placebo. But you’re not going to be told.
Did it bother you that you might have a placebo at all?
Not really, no.
Did you, if you were to explain what, what a placebo is, what did you understand about that?
It’s a drug but it’s not really a drug, so it doesn’t do anything. But it’s just to see if your mind makes, can change stuff.
And, but that, you, were you happy with that; were there any concerns about, you know, not knowing which drug?
Not really.
No?
No. No, I’m fine really.
You were fine? And, and you, again what was the purpose of the actual trial itself?
To like try to stop the thinning of the bone from people who take steroids.

Taking the extra medication with her regular tablets was easy for Ruby and she only attends...

Taking the extra medication with her regular tablets was easy for Ruby and she only attends...

View topic summary
SHOW TEXT VERSION
PRINT TRANSCRIPT
When I agreed to take part, the doctors, like they randomised me to one drug. And then I went to get it from the pharmacy. And then I have to take that every day. And then if I run out I’ve got to go back to the pharmacy and get more.
So when you say, how do you have to take the drug?
I was randomised to drops of something, and I’ve got to take seven drops a day. And they have to be kept in the fridge as well.
Well, the drops have to be kept in the fridge. And then I have to take seven drops every day. “It doesn’t matter when” the lady said, “Just take it.” And then if I run out I’ve got to go back to the pharmacy in the hospital to get, but usually I’m there anyways for an appointment, so I get it when I’m there.
And how, how long do they normally last- the drops?
They last maybe like three months quite well, because it’s drops. So they give me like a few tubes there every time I go.
So you go when you said you, when do you have your sort of regular appointments?
Every time I go they book me in for another one in the, in like the next two or three months.
I think it would have been a bigger thing if I hadn’t been diagnosed and hadn’t been having to take other drugs at the same time. Probably because it’s at the same time it’s been more like mixed up together. So when I go for like, when I go for my appointments at the hospital it’s all like mixed together. So it’s not like separated into two different things. So, yes, so, yes, it seems like less because it’s taking up less.

Although Ruby receives some personal feedback at each hospital appointment, she is unsure if she...

Although Ruby receives some personal feedback at each hospital appointment, she is unsure if she...

View topic summary
SHOW TEXT VERSION
PRINT TRANSCRIPT
What would you, what are you hoping might happen at the end?
Something good. That my bones haven’t been thinned that much.
And have they said when you might get any results at all?
Not really. ( No?) I don’t think so. Maybe at the end of the year.
Do you think it’s important to have those?
Yes, it’s important to have results. Otherwise you’re just taking it and not knowing what’s going on.
Would you like to have some results?
Yes, yes. I’ll probably ask about that next time.
Previous Page
Next Page