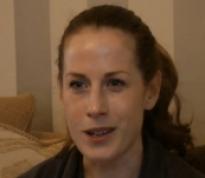 Age at interview: 32
Brief Outline: Maria is married to Andrew and they both work in marketing. Their daughter was born with a cleft palate, but it was not diagnosed until she was four days old.
Background: Maria is a self-employed marketing consultant and is married with one daughter aged 2 years. She is White British.

Maria is married to Andrew and they both work in marketing. Their daughter was born with a cleft palate, but it was not diagnosed until she was four days old. The couple discovered their daughter had a cleft palate because she struggled to latch properly to breastfeed. When she was able to get some milk it would run down her nose and the couple realised there was something wrong, but had not considered that it was a cleft palate. Their daughter also had reflux so the couple took her back to the hospital and she was admitted to the Special Care Baby Unit (SCBU) where she was fed with tubes. In the SCBU a nurse took a routine swab to check for MRSA and noticed that the swab was going too far back into her mouth - it was then that they were told she had a cleft palate.

Maria and her husband were given a ring binder with information about cleft palate but the special care nurses did not appear to be knowledgeable about the treatment of cleft palate. However, the next working day a specialist cleft nurse visited the family and talked them through the treatment pathway for cleft babies and told them their daughter would need an operation to repair the cleft in her palate. The couple also did their own research on the internet and came across the CLAPA (Cleft Lip and Palate Association) website through a Google search, and this helped them answer some of their questions about the cause and treatment of cleft palate.

The cleft nurse showed Maria and her husband how to use the special squeezy bottles that were provided by CLAPA and they could then take on the role of feeding their daughter. However, feeding their daughter in this way was both time consuming and exhausting for the family. Maria was also very conscious of the prevailing attitude that 'breast is best' and the lack of awareness she experienced (from both midwifes and members of the public) that babies born with clefts have great difficulty in breastfeeding.

Marias' daughter had her cleft palate repaired when she was 6 months old. The lead up the operation was a source of great anxiety for Maria as she questioned whether it was really necessary at such a young age? However, the operation went ahead, following a general anaesthetic and it took about 4 hours. Maria and her husband found it difficult to re-establish their daughter's feeding patterns post -operation and it took the family about 6 weeks to stabilise feeding again.

Despite the difficulties Maria and her family have experienced their daughter is growing into a confident child who has good speech and hearing.

Maria Z did not feel comfortable with having to explain to other people in her community that she was not breastfeeding her daughter who was born with a cleft palate.

Maria Z did not feel comfortable with having to explain to other people in her community that she was not breastfeeding her daughter who was born with a cleft palate.

View topic summary
SHOW TEXT VERSION
PRINT TRANSCRIPT
What was... really more awkward was the questions from people. I had no idea that it was a normal question to ask: people in the street, you know, neighbours would ask whether I was breastfeeding [laughs] and I kind of, I used to be really surprised at every single time somebody asked me whether I was breastfeeding. And, you know, it had never occurred to me to ask somebody who had just had a baby how they were feeding it [laughs]. And that was quite tough. And actually at that stage I didn’t want to go into the ins and outs; we kept it very private at first about Martha’s palate.

And I didn’t want for it to turn into a... discussion topic for a street corner chat.

And so I always used to just say, yes, I was breastfeeding.

Yeah, you know, just kind of side-stepped the question completely.

That’s a kind of interesting statement.

Yeah, yeah I just, I wasn’t ready to go into it with other people. And I still, you know, now when I think about those early days, I still find it really upsetting, because it was a difficult time.

But certainly I wasn’t ready then to speak to people about it that I didn’t know particularly well. And, you know, it, it was... it was a really anxious time for us until things kind of settled down and we got into the groove, so yeah.

Maria Z experienced difficulty feeding her daughter when she was born and several days later she went back to the hospital and her daughters’ cleft palate was diagnosed by a consultant.

Maria Z experienced difficulty feeding her daughter when she was born and several days later she went back to the hospital and her daughters’ cleft palate was diagnosed by a consultant.

View topic summary
SHOW TEXT VERSION
PRINT TRANSCRIPT
So, yeah, from when she was four days old she was diagnosed, and from birth she’d really struggled with breastfeeding.

And I’d kind of thought it was because I was doing something wrong, or it was something to do with technique. She... was really having trouble latching.

And when she did manage to get some milk it was coming down her nose, she was restless in-between feeds, and she was tiring really quickly, and we know now that all of those things combined are key indicators of a problem. But we had no idea, we just, we were... brand new parents and didn’t really know what to expect in those early days, so had no idea that it was all pointing towards a cleft palate.

OK and had you any prior experience of a cleft palate in your family?

Not at all, not in the family.

We’ve got a friend who had cleft lip and palate, but it was just... not something that really we talked about.

Something you hadn’t really considered, yeah?

Yeah it just hadn’t occurred to us that we’d ever come up against it. And definitely, you know, there was, there was no family history. So it just, it hadn’t even factored.

Sure OK, so who was it who made you aware that it was a cleft palate in the first instance?

It was a nurse. So Martha also had reflux when she was born. And the reflux combined with the cleft was making her quite uncomfortable. She was having some choking episodes. And it was when we took her back into hospital to be examined by a consultant she had one of these choking episodes as the consultant was examining her, and he admitted her back into Special Care Baby Unit.

And as we went through there the nurse who was taking an MRSA swab noticed that the swab was going too far back into her mouth, and she kind of pretty much said straight away that she’d found out what the problem was and…

…that Martha had a cleft palate.

And this type of cleft palate, is it what they describe as a submucous one?

OK that’s fine, yeah. OK so on hearing that news, what did you do next? What kind of support and help was available?

In the short-term, the very short-term, there wasn’t much support available. We were given a ring binder with a few diagrams in, but the special care nurses weren’t that knowledgeable about the subject, didn’t seem able to tell us anything about what was ahead of us, and what the treatment options were.

And I was kind of left wondering whether Martha was ill, and whether it was something that was going to, you know, make her sick, didn’t really understand that actually there was, you know, there was a whole team of people who were going to take care of her, and it could all be fixed with one operation.

Maria Z was asked by a midwife if she was going to try and breastfeed her daughter even after Maria had explained to her that she would need to feed her baby by bottle. The midwives were poorly informed about the ability to breastfeed a baby born with a c

Maria Z was asked by a midwife if she was going to try and breastfeed her daughter even after Maria had explained to her that she would need to feed her baby by bottle. The midwives were poorly informed about the ability to breastfeed a baby born with a c

View topic summary
SHOW TEXT VERSION
PRINT TRANSCRIPT
I was asked by a midwife about whether I was going to breastfeed. You know, she kind of looked at me after I’d explained everything to her, and shown her a squeezy bottle, and explained what was going to happen over the next few months, and how the muscles in the mouth were formed and... and she still looked at me and at the end of that she kind of said, “Oh so you’re not going to try and breastfeed at all?” And I just thought, “I’m... I’m not sure that you’ve listened to a word that I’ve said.” And, you know, these people are there to hold people’s hands through a really uncertain time anyway, but when they’re putting pressure onto somebody to do something that’s physically impossible [laughs] it’s pretty, you know, it’s not ideal really.
Previous Page
Next Page