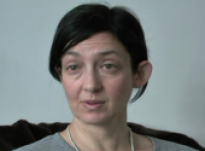 Age at interview: 45
Brief Outline: Theadora's mother developed jaundice in 2004. After doctors diagnosed pancreatic cancer she had chemotherapy, which continued intermittently almost until she died in 2007. She found complementary therapies, such as reiki, helpful and changed her diet.
Background: Theadora is a senior civil servant. She has a partner and is co-habiting. Nationality/Ethnic background' White Jewish.

In 2004, Theadora’s mother looked jaundiced. She was 64 years old and had previously had trouble with her gall bladder, which had been removed. Theadora’s mother went to see her GP, who immediately referred her to see a consultant at the hospital. She was seen within two weeks and was told that she had a problem with her pancreas, probably pancreatic cancer. After numerous tests the doctors decided that the tumour was contained within the pancreas, that there were no secondary tumours, and that she would be able to have a Whipple’s operation. The family was glad to hear this and hoped for a cure.

Theadora’s mother went into hospital to have surgery, but the consultant told her in the hospital the night before the operation that he had looked at the scans and that unfortunately he could see some secondary tumours in the lungs, so the Whipple’s operation could not be done after all. Theadora’s mother felt that the surgeon had made the wrong decision and was very upset. Theadora and the rest of her family felt devastated by the news of the cancelled operation, and were very angry. Theadora insisted that the consultant should see her mother the next day to decide on future treatment. She told him that the family might consider making an official complaint about her mother’s treatment.

The doctors inserted a stent into Theadora’s mother’s bile duct, to relieve the jaundice. As months went by the stent sometimes slipped out of place so it had to be replaced. Over the two and a half years of treatment Theadora’s mother had five or six stents inserted, sometimes during an endoscopy but sometimes through the abdominal wall. The procedure became more complicated as time went on and as yet another stent had to be replaced.

Theadora’s mother was given gemcitabine and other forms of chemotherapy. She liked to feel in control and did a great deal of research on the internet and made sure that she was included in clinical trials when appropriate. She often felt sick, tired and unwell during the chemotherapy, but she had weeks when she was not having chemotherapy so was able to lead a reasonable life and even go away on holiday to France. Some of her treatment was within the NHS, some was private and some was funded by research grants.

Another side effect of chemotherapy was hair loss, but Theadora’s mother had some excellent wigs made. She was determined to continue treatment for as long as possible because she had a strong desire to carry on living. She did not have chemotherapy for the last few months of her life, but apart from that she had treatment most of the time.

Theadora’s mother attended a support group for people with cancer and while she was there she tried various forms of complementary therapy, such as reiki and massage, which she liked. She tried aromatherapy but did not like that treatment. She also read a great deal about diet and changed her diet and virtually became a vegan. She aimed to make her body alkaline rather than acid. Theadora knows that there is no evidence that this diet helped her mother, but she points out that her mother had been given a prognosis of just six months, but she lived for two and a half years after the diagnosis.

In 2007 Theadora’s mother became more unwell. She had oedema and looked very frail. She walked into hospital to have yet another stent inserted into her bile duct, but the doctors did not manage the procedure, which by then was experimental surgery. She stayed in hospital for the last three weeks of her life. Theadora and her sister had to feed her mother and help her with other things, but her mother was always mentally aware of what was going on and able to communicate and give consent to procedures. She was in discomfort and pain at times so was given strong painkillers, including morphine, which she could self-administer via a pump. She only had morphine during the last three days of her life. The morphine made her sleepy but she was always compos mentis and coherent except on the night before she died, when she became distressed and confused. Theadora’s mother was very distressed for about an hour and a half, but then went to sleep and died peacefully at 11.00 a.m. the next day, with members of the family with her. Theadora stayed with her mother for about two hours after she died, which she felt was very important.

Theadora’s mother was in a private room in hospital when she died. She had hoped to die in a hospice but the family and the hospital staff decided that it would be too distressing and that she was too ill for her to spend almost two hours in an ambulance and they felt that the nursing care in the hospital was good, so a transfer did not take place.

Theadora’s mother was Jewish and she had a Jewish funeral with many people from different faiths in attendance. She died on a Saturday and was buried the following Tuesday. About 300 people came to the funeral. There were prayers in the family home for two nights after the funeral and lots of people came to demonstrate the deep affection they had for her. A year later the family had a ceremony and erected a memorial stone at the site of her grave.

Theadoras mother wanted to die in a hospice, but her illness deteriorated in hospital and she...

Theadoras mother wanted to die in a hospice, but her illness deteriorated in hospital and she...

And then the night before she died was the, at about 11 o’clock at night. Well I should say, there was a, she’d already looked at hospice care, and her desire was to die in a hospice. Not to die at home. And not to die in a hospital. And she had looked at a particular hospice which she had, she felt was where she wanted to die. And so my sister and my father had visited, I hadn’t actually visited it.

And when we realised that she was significantly unwell during this three week stay, we talked to the palliative care team about the transfer to the hospice. But her care, her illness deteriorated at that point so quickly that they were making plans to move her, but the concern was that the move in an ambulance, which would have been at least an hour and a half in ambulance from where she was, would’ve been really, really disruptive.

As I said we were lucky enough that she was in a private room, she wasn’t on a ward. If she’d have been on a ward I think we’d have said, “Bung her in a, we’ll take her to the hospice, it doesn’t matter.” But she was in a private room that was quiet; it was very good nursing care. We could stay there, so we didn’t feel an enormous need. If she’d have been in a ward we would have done.

Theadora and her father went to the local register office to register her mothers death. It felt...

Theadora and her father went to the local register office to register her mothers death. It felt...

Were there practical things you then had to do?

Yes. We obviously had to go and register the death and I went with my father to do that at the nearest sort of registry. That was, and that’s bizarre, because you’re sitting with people who are registering births. And that’s a, in some ways it’s lovely, in some ways it’s lovely because you are sitting with people who are celebrating, I can remember sitting next to a man who was celebrating the birth of twins, and he was in a complete state of shock. And, and it was also in a place where there were people who were migrant, immigrant populant, who were coming in to get various other paperwork around that. And you’re all sitting together in a waiting area, very squashed up and it was very hot as I said. A very hot summer. And you’re registering a death. At one level there was something quite nice because as you know in death, there’s life. Things go on. Life happens. So, I wasn’t appalled by it, but it was a very strange thing to be in that mixture of a place.

But the actual then going in and registering it and doing that was dignified. I couldn’t again say that it wasn’t.

And then we had to do the process to get her buried. Jewish people get buried very quickly. So we needed to sort that out.