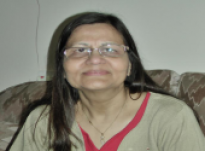 Age at interview: 60
Brief Outline: Savita's husband was diagnosed with Motor Neurone Disease in 2002. In the last year he has deteriorated significantly and now Savita is his fulltime carer.
Background: Savita is married with two grown up children. She is a retired Project Analyst. Ethnic background' Indian.

Savita is a fulltime carer for her husband who has Motor Neurone Disease. He was diagnosed in 2002 and up until the last year he has had a fairly good quality of life. In the last year his condition has deteriorated a lot to the point where he has lost all limb movement, he cannot swallow and is fed via a PEG feeding tube. Savita remembers when he lost the ability to eat, and describes how this was particularly upsetting and difficult to witness because he had enjoyed food and eating so much before.

Now Savita is always on hand to address her husband’s needs and feels she can never really relax. She has to administer his medication, his feeding tube and ensure he is comfortable by moving his limbs and arranging blankets and pillows. She is unable to lift him and so carers visit daily to move and bathe him. Before Savita’s husband’s condition deteriorated they had an extension built to accommodate his wheelchair manoeuvring and in anticipation of his worsening condition. This room is now set up with a hospital bed, walk-in shower, carer’s bed and all the equipment he needs. Savita describes how at the time they had no financial support or advice in building this, but feels they were lucky because her husband was a design engineer and so is very good at visualising spacing.

Savita discusses how she gets very little time to herself. Savita and her husband have two grown up children, but because they have jobs and young children themselves, they cannot provide much support. However, Savita discusses how it is a relief when they visit as it gives her a chance to talk to someone else. For four hours each week a carer from a charity called Crossroads visits and she has also recently arranged five hours per week of care from the social services, but this has not started yet. She does not believe that enough information is provided for carers to access help and support which is available. She recalls how she became very tired after having sleepless nights due to caring for a long time until a nurse suggested she asked for help with care during the night time. They now have a temporary night nurse twice a week, but if it had not been mentioned in passing she would never have known this service was available.

Most of the time Savita is happy to care for her husband, however sometimes it is very hard and she describes how it is monotonous doing the same tasks continuously. She feels sad that they can no longer share the things like they used to or have a proper conversations anymore. To communicate with one another her husband can whisper certain words, but for anything more complicated they use an alphabet board; Savita’s husband looks at the letters to spell words and she follows his eye movement. She is also saddened because she feels he has missed out on playing with his grandchildren.

Savita’s faith is important to her; she believes prayers have healing powers and describes how her faith acts as a support for her. She advises other carers that it is very important to have other people to share and talk about experiences with and believes carers should not have to fight to find the support which they are entitled to, as this only adds to the workload.

Savita was sleep deprived through attending to her husband at night; she only found out that...

Savita was sleep deprived through attending to her husband at night; she only found out that...

I know enough about the disease, yes, but, as far as the help goes, I was a little bit disappointed that it wasn’t, you know, you have to fight for it. It, it doesn’t get given to you automatically I don’t think. Like, I’ve got night nurses coming now twice a week.

And I didn’t know this, that I could request somebody to come and help me at night. It was only that one of the evening nurses, the twilight nurses, when they come to check the syringe drivers and she said to me she said, “You can request for help at night.” Because I wasn’t sleeping. I was, I had spent, during September October he had spent a lot of time in hospital and I had been staying with him in hospital and there was no, you know, no bed. It was I was sleeping on one of those chairs, hospital chairs, you know that they have, the armchairs that they have and I was sleeping on those chairs. I was very tired and even when he came home he wasn’t well. He was really sick at that time. He was he was very sick and he was getting up a lot at night and I was getting up a lot at night and I, I was very tired. So one of the twilight nurses, she said, “You know, you can ask for help at night.” I didn’t know about this and she said, “Yeah, you need to just request it through your district nurses.” And I felt that they could have done that for me. So if one of the evening nurses hadn’t mentioned it, I wouldn’t have known that this help is available. So that’s when I felt disappointed, you know. They kept saying to me, “Oh, you look tired. Oh, you look…” But they didn’t give me a solution, which they could have done, which I’m sure they knew about, but they didn’t so… so it’s like, you know, the more people you talk to apparently, the more tips and hints you pick up.

Savita is grateful for the extra five hours respite time she has been given by social services....

Savita is grateful for the extra five hours respite time she has been given by social services....

What I am getting is I started getting this since November only, you know. Four hours a week from an organisation. Can I?

Can I, Crossroads. So and I can manage the four hours, whether I want it in one go or whether I want it split or whatever. So they’ve been helping me and then that’s how then I go out, do my bits and pieces, my shopping, my, you know, my appointments, my banking whatever. Obviously, it’s a struggle. It’s not enough. And then again last week, my social worker then agreed and they’ve given me an extra five hours a week now. So I’ve got nine hours a week, which I haven’t started using them yet because it was only on Friday that I found out they’re going to help me out there.

It’s very hard otherwise, you know. You just day in day out. It’s just the monotony of the, the tasks. Sometimes I do it happily and other times I do get angry and, and I sometimes think that he’s playing up, you know, deliberately but I know he’s not and he can’t help it but that’s how I feel sometimes [laughs]. So it is hard. I think it’s nice if you have somebody to share. You know, even the little daily routine of suctioning like, you know. Sometimes he needs suctioning every half an hour, sometimes it’s every ten minutes, sometimes it’s for a couple of hours there’s nothing. So yes, you can relax but you can’t really relax because you don’t know when that person’s going to go off, when he’s going to call you. So you, you have to be on your toes all the time really.

Do you take any time out for yourself to do just for you as opposed to your jobs list?

If there is any time then I do things like going and meet with friends or just, sometimes I might just go upstairs, you know, even if they’re here, I’ll just go upstairs maybe have a sleep or do my things. But there’s not much time for that. Maybe now with the nine hours, yes, there’ll be more. Oh, yeah, recently I did a [tut] I did a French polishing course so [laughs] so I managed to get on to that and that was organised by the Carers Association. So previously, I haven’t been able to go any of these courses or anything. From time to time they organise things like days out or, you know, for the carers so I was able to do that and they were telling me that they do a relaxation sessions once a fortnight or something. So I’m hoping I’ll be able to do that now with the extra time, yeah.

Savita and her husband have decided that they do not want him to be resuscitated, but Savita...

Savita and her husband have decided that they do not want him to be resuscitated, but Savita...

You were talking about the future. Had you thought it through?

Yeah, first of all, first of all about his health. His personal health. We’ve discussed doctors keep asking us about, you know, if he was to arrest then what do you want done? And up to last year, the answer used to be, “Of course we want to revive him, you know, of course, we want to resuscitate him.” Because he had a quality of life but since he fell ill last year April/May, he had a bad attack of pneumonia so and then, since then, he has like gone downhill a bit more and now he’s, he’s not able to do what he was able to do before. So we’ve decided that if he arrests then we’re not going to resuscitate him. That is the idea but I’m sure, when it happens, it might be a different instinct at that time, so I don’t know. And then we’re assuming again that he’ll be the first one to go but I think the way he has recovered from last year, I’ll think he’ll go on forever.