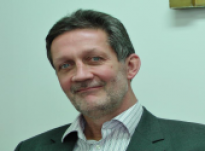 Age at interview: 57
Brief Outline: John talks about caring for his younger son Tim, who was diagnosed with acute leukaemia whilst he was at university age 20. Tim returned to the family home where the family could offer him care and support. Tim died when the leukaemia returned a second time.
Background: John is an HR consultant. He is married and has 2 adult children Ethnic background' White British.

John’s younger son Tim was 20 years old when, during his first year at university, he was diagnosed with acute leukaemia. The diagnosis was a devastating shock to the whole family. John and his wife took their lead from Tim and only found as much information as he wanted to know. John feels this was a positive thing for the family as they never felt they were withholding information from Tim by knowing more than he did about his condition or the treatments.

Tim returned home and started 12 months of intensive chemotherapy. It was a difficult time as the effects of the chemotherapy meant that sometimes he would have to be rushed into hospital. Whenever he was in hospital John or his wife went to see him every day to give him support. Gradually Tim became stronger and able to cope with the chemotherapy. He was always positive and quickly got into remission and looked forward to getting on with his life.

Tim started at a new university close to home as soon as he had completed his chemotherapy. Although Tim still had regular blood checks, the family life seemed to return to some sort of normality and John was pleased to see his son go to university, make new friends and return to student life. After 15 months of remission a blood test showed that the leukaemia had returned. This was again a devastating blow for all the family, especially knowing the treatments that would follow, but they also felt positive knowing that it had been treated before.

This time Tim needed to have a bone marrow transplant as well as chemotherapy. The side effects of chemotherapy seemed to be much more severe this time and Tim would often have to spend time in hospital after chemotherapy. Throughout this time John felt a nagging fear for his son that never left him.

The chemotherapy did not seem to be working and after 7 months John was told that there was no other treatment that Tim could be offered and that it was now a case of trying to contain the disease. John immediately took the family to visit relatives in Spain for a few days before returning to start looking at palliative care options.

John’s wife stopped working to care for Tim and there were a lot of local support services in the home to help Tim and support his care. Tim was always positive and battled against his cancer and John felt it was important to stay positive for his son.

However Tim’s condition continued to decline and 9 months after his second diagnosis he felt he couldn’t go on any longer. John drove him into the hospital and he and his wife stayed with him constantly. When Tim realised he was going to die, he talked to his parents about dying and John talked to him about writing down what he wanted to happen to his things. After Tim’s death, John found a letter from Tim expressing his love for his family, which is a great comfort to them all.

Reflecting on Tim’s three years with leukaemia, John feels it was a roller coaster of joy, happiness, fear, and deep distress. He feels he was closer to his son during this period than at any other time and remembering his deep bond with Tim is very special for John.

Since Tim’s death, John has kept himself busy. He continues to work full-time.

He has also walked to the World Cup in Germany to honour Tim who was a football fan and written a book recording the journey. John is also a trustee and an active fund-raiser for Leukaemia and Lymphoma Research.

John felt he had to wait too long for the diagnosis of his sons Leukaemia.

John felt he had to wait too long for the diagnosis of his sons Leukaemia.

And then, eventually, he got transferred to a regional hospital, where he was treated, and that was the first time, and this so this is this is three and a half weeks after I brought him home and almost a week since he’d been in hospital, we eventually, get told that he’s got leukaemia.

So we, we had that horrible time right at the start. We knew something was wrong. It was obviously serious. He was getting worse. He was very weak by the end, he could hardly stand up on his own, you know, as a as a very fit and active twenty year old. And, and people were kind of skirting around it but they wouldn’t actually say anything, because they didn’t know for certain. And, and so, you know, that wasn’t that wasn’t good and I think certainly, from my point of view, this is because cancer is so rare in young people, it, it takes far too long to diagnose it really and we experienced that.

John chose not to seek out extra information so that he was never in the position of withholding...

John chose not to seek out extra information so that he was never in the position of withholding...

Thereafter, what happened was that we took our lead and the clinicians took their lead from Tim in terms of how much he wanted to know. Now, his view was that he wanted to be very, very clear about the treatment that was right for him, to be absolutely clear about what needed to be done, what he needed to do because he wanted to, you know, to look after himself as much as he could in terms of, you know, taking pills and oral treatment etcetera. But he didn’t want to sort of know all the ins and outs and [Name] and I sort of talked about this on our own early on and we decided that we would respect that. What we didn’t want to do was get into a situation where we knew a lot more than he did and we were then faced with, you know, the dilemma, “Do we tell him?” When he wanted to know, you know, if he was asking questions, then it was absolutely, you know, right, we felt, to talk about it and to find out to get answers. And, you know, doctors were then very helpful but what we didn’t do was, was try and put any pressure on him to want to know more than he wanted to wanted to know.

John and his wife were conscious that they might have neglected their other son while attending...

John and his wife were conscious that they might have neglected their other son while attending...

Do you, this time of care, put a strain on, on the family?

Yes, it did. It did, our elder son, [Name], was living away from home, at the time, and had been for a had been for a few years and we’d always managed to sort of see him on a regular see him on a regular basis, spend time with him, talk to him regularly. And that became very difficult and I think both [my wife] and I were very conscious that that we were neglecting [our son] and whilst we, you know, we were sure that he understood we still felt, as parents, that that wasn’t good, that that we weren’t seeing him. And, you know, he got he came to see Tim as often as he could do but that wasn’t that that wasn’t always easy. So that was one thing.

I think with [my wife] and me it kind of magnifies everything I think would be the best way that I could describe it. I think the pressure that you feel under, the constant nagging sort of aching pressure that never goes away means that you lose your temper more quickly. And ironically, I think, you know, we found that, whilst we’d try and be understanding with other people, it was almost like we couldn’t keep on putting an act with each other. So there were times when, and I know we did lose our temper more regularly with each other than we than we would have done, but equally, there were times when it was on each other that we could look to for comfort. So again it was it was kind of bitter it was kind of bittersweet.

And I think we worked pretty well in as much as [my wife] stopping work being there all the time for Tim, me sort of charging around all over the place but being getting there supporting there, making sure I saw Tim pretty much every day when he was when he was when he was in hospital. He kind of gave us space as well. I think I think certainly the times when he was, and there was the three of us were sort of, you know, were in a maybe in a room for four or five days, as happened on a couple of occasions, well, there’s been three occasions. I think that’s when the pressure kind of really, really builds and it’s kind of hard to keep things together properly.