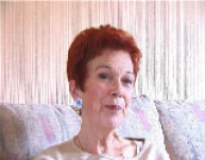 Age at interview: 62
Age at diagnosis: 48
Brief Outline: Diagnosed with breast cancer in 1987, under went a mastectomy and reconstruction.

Describes her experience of having a reconstruction at the same time as a mastectomy.

Describes her experience of having a reconstruction at the same time as a mastectomy.

View topic summary
SHOW TEXT VERSION
PRINT TRANSCRIPT
So I woke and although I had stitches all here and across my back, the problem was it did hurt, and of course either way sitting up, I couldn't lie on my front, lying on my back, I could lie on the one, but moving, so I used to just sit and stop it hurting and not move with pillows.

Coming out of course I was almost in a state of euphoria because it was all over. They'd taken it, I had a new boob which I'd looked at, that was something I didn't touch on before, I was not afraid to look at it. When I looked at it I thought it was a miracle.

I thought it was amazing that they could take something from my back, put a piece in - because I wasn't small-chested, I was a D cup I think - and they'd done running stitches, they'd sewn me up very neatly with a piece let in and down to here is, down you know I can wear low dresses right down. I can wear a bikini.

You can see the scar on my back and possibly if I lift my arm because I've got the depression. But I thought it was an absolute miracle that I didn't feel. I mean it doesn't look like a boob really because I didn't have a nipple put on. But you put it in a bra and you really can't tell the difference.

So of course for me, I was so fortunate that I felt I suppose complete again. I didn't think I'd lost anything because they'd given me this wonderful new boob.

Describes how, at first, she sought out as much information as possible but later read only what...

Describes how, at first, she sought out as much information as possible but later read only what...

View topic summary
SHOW TEXT VERSION
PRINT TRANSCRIPT
First of all after, immediately after, I decided I wanted to know all I could about breast cancer. So I cut out things from the paper, I listened and then I became a volunteer, all the information that was available.

And gradually, or quite quickly, I decided no I'd stop because it's this, a little knowledge is a dangerous thing. I think that's taken somewhat out of context but I felt that the less I knew, the better, as long as I knew enough to help and could talk about my experiences.

I felt you could know too much, especially talking to other women because you didn't know enough and you could say something and do damage. So I've stopped really.

Describes the various complementary therapies she has used.

Describes the various complementary therapies she has used.

Yes the Yoga group gave me such confidence in myself, they changed my way of thinking.

Reflexology, now that was when I've had various physical problems I suppose. I've also had healing which was another revelation for me.

That's this business of somebody looking after you. This feeling you know which always makes me smile and I'm not sure that it's not happening now, but it gives me, it's a big help so that's another alternative.

Yes, I've had Reiki with this friend who practices reflexology and that was interesting because I felt there was a great big weight on my chest.

And I finished the session and I said' "Gosh I felt as though I've had a great big weight on my chest and I can't understand why." And it suddenly dawned on me, of course I would have because of the operation.

I don't know whether this is strictly alternative, oh I've been to an osteopath which was wonderful. And chiropractor recently because I've terrible trouble, because I've got this re-arrangement of muscles it causes a problem this side and ache.

And this bust, this breast here has grown so much you know it's heavy, so I have to use a prosthesis to balance it which again you know. So the chiropractor, McTimoney, which is the gentler, that was a big help.

So I have yes, because I don't think, before I would never have used alternatives so I suppose that's an ongoing thing. I find it really interesting. Sometimes it doesn't always work but I work on the principle that it certainly doesn't harm you, and it's better than taking, well, antibiotics.

Well, I've got to be terribly careful with those you know for something fairly minor you know, I haven't touch wood, I haven't had anything really major.