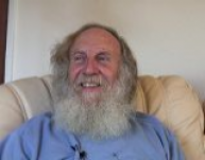 Age at interview: 68
Brief Outline: Invited to be screened for bowel cancer in 2006 when aged 68. The result of the Faecal Occult Blood (FOB) test was abnormal, so he had a colonoscopy, during which one benign polyp was removed.
Background: A white British man, a retired clergyman, married with 5 children.

He was invited to be screened for bowel cancer in 2006 when aged 68. The result of the Faecal Occult Blood (FOB) test was abnormal, so he was asked to repeat the test. This was also abnormal so he was invited to have a colonoscopy, during which one benign polyp was removed. He will have another test in three years time to make sure the bowel is healthy.

A supermarket bag came in useful when he needed to catch some of his motion.

A supermarket bag came in useful when he needed to catch some of his motion.

View topic summary
SHOW TEXT VERSION
PRINT TRANSCRIPT
What did you make of the information, the little leaflet that came with the test kit telling you how to do it?

Oh it was all very clear.

It was all very clear, but by, I found it uncomfortable having to lean over the toilet in my own excretia and fiddling around with it.

But again not painful but, and not embarrassing since it was a solo activity.

Well physically, I mean my mind goes back to changing the nappy of the children and the nausea of leaning over and smelling the excretia yes.

How did, I think they suggest various ways that you might do that.

They did yes, I mean I personally I got a supermarket bag and put that inside the toilet.

And then performed on top of it, so that was a barrier between me and the toilet water and then having taken the sample I could simply shake the bag into the toilet and with another bag put that bag into and dispose of it.

The information sheet advised people to talk to the GP about reducing or discontinuing drugs such...

The information sheet advised people to talk to the GP about reducing or discontinuing drugs such...

View topic summary
SHOW TEXT VERSION
PRINT TRANSCRIPT
Please could you tell me a bit about the preparation for the colonoscopy?

Yes, I was sent an information sheet. This was the nursing sister when I saw her and she also gave me the appointment then for the colonoscopy. She gave me a preparation pack with information sheets as to what would be happening and also the laxative which was called Picolax and instructions as to how it should be used. It had full information on it, for example people, who were on warfarin and aspirin, they had to start five or six days before the colonoscopy in reducing their dosage and taking to their GP about coming off the, the warfarin. But for me it all happened really the day before. My hospital appointment for the colonoscopy was in the afternoon, 2, 2.30 in the afternoon and so I really started 24 hours before. I could eat normally on the day before and then midday prior to that then I would have to start with taking away roughage from my diet. A diet sheet is given, nobody need starve, there's plenty that can be eaten and that was straightforward. It was just a matter of missing out from, from one's meals, the things that would bind up the bowels. But then the Picolax, which was to loosen the bowels, and with all the warnings, it is a laxative and so stay somewhere near a toilet. And I took the first the day before, by taking the first it, I was given two sachets in which was powder and the powder was mixed with water and, and drunk and the first one was the evening before, I think about 6 o clock the, the evening before. And I duly then cancelled everything in my diary so that I could be available for the runs to the toilet. But I don't think very much actually happened that evening, I certainly didn't have the runs but next morning I certainly did when I had to take the second. It wasn't an immediate effect I suppose it was about an hour after taking the Picolax and that had to be taken at 6 o clock in the morning and I suppose it was about an hour then that I first, I felt the urge to go the loo and thereafter, yes not uncontrollable but thereafter I knew I had to get to a the toilet fairly quickly and when I did then it was very much, it was liquid and diarrhea.

The nurse phoned to say that the polyp had been benign and that he did not need to keep the...

The nurse phoned to say that the polyp had been benign and that he did not need to keep the...

View topic summary
SHOW TEXT VERSION
PRINT TRANSCRIPT
I did remain quiet for a few hours after that [the colonoscopy], and before leaving the hospital though an appointment was made for me to go two weeks later for a follow up consultancy to have the result of the polyp. But in actual fact it was about a week after that that the original nursing sister phoned me up and said they'd had the results back and everything was benign and unless I wanted to keep that appointment and go and talk to them there was no need to do so. All was clear and they would invite me for another bowel screening in three years' time.

His involvement in the screening programme was a positive experience.

His involvement in the screening programme was a positive experience.

View topic summary
SHOW TEXT VERSION
PRINT TRANSCRIPT
I'm just very grateful for the screening programme; anything that helps the health of the nation and this, and if this picks up cancer at a stage that makes it more treatable, that can only be a good thing. My experience of the programme was a very good and positive experience and I would certainly encourage anybody if they're invited to take part then to respond and take advantage of the investigation, yes.