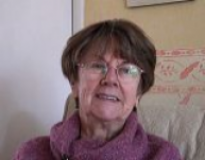 Age at interview: 70
Brief Outline: She asked if she could be screened for bowel cancer. The result of a Faecal Occult Blood (FOB) test was abnormal, so she had a colonoscopy, during which two benign polyps were removed.
Background: A white British woman, a retired nursery nurse, widow, with 2 children.

She wanted to be screened for bowel cancer and had to ask to be screened because she was over the age when people are normally invited for screening. The result of the first Faecal Occult Blood (FOB) test was unclear, so she was asked to repeat the test. The result of the next test was abnormal, so she was offered a colonoscopy. She decided to have a colonoscopy. During this procedure two benign polyps were removed. She will be invited to have another colonoscopy in three years time to make sure the bowel is still normal and free of any disease.

She said she was completely devastated when the test result came through.

She said she was completely devastated when the test result came through.

View topic summary
SHOW TEXT VERSION
EMBED CODE
PRINT TRANSCRIPT
And then you got the result, can you say a bit more about getting the result of the second one?

The result of the second one, I'm trying, trying to read the letter in my mind but yes, I was complete devastated when the result came through because I'm, I was okay, there was nothing wrong with me, and so on, but I was, yes that is the word I really was flabbergasted when it came through. And the appointment came for me at the hospital and I was very, very concerned, very concerned.

This was when you had the abnormal result?

And no one to chew it over with you see, no one to discuss it with. Do I tell the children or do I not at this stage?

What did you do?

And my daughter has a bit of medical knowledge, she is a radiographer so I did tell her. I wasn't going to but, 'Right give me the telephone number,' I said, 'No don't do anything like that yet, don't do anything like that yet, let's wait and see.' Yes I did tell them in the end, yes, I thought it was only fair. Because I was thinking the worst and I thought well you know something else would probably knock on from this so they would have to know so I did tell them.

She describes screening as a form of sifting to find people who may need treatment.

She describes screening as a form of sifting to find people who may need treatment.

Do you think people understand what is meant by screening?

Well I think that they have, women especially, realise with the mammography, with the breast screening and also the smear test is another screening isn't it, so yes I think, I think we know what screening means, that they go through everyone to find, a sifting really of finding the good, you know the bad ones that need treatment.

So when you say they go through everyone, can you say a little bit more about that for those people who might not understand?

Well they do a test on everyone who presents themselves for testing to find any problems that may crop up, any problems even in the early stages of the problems so that they can be caught early and the operation is not as, not such a big operation is needed to clear things up.

So anybody, even people who are perfectly healthy would be invited to be screened?


She had not been invited to take part in screening for bowel cancer because she was over 69, so...

She had not been invited to take part in screening for bowel cancer because she was over 69, so...

SHOW TEXT VERSION
EMBED CODE
PRINT TRANSCRIPT
Could you just tell me again how you heard about the screening programme?

Well I listen to Radio Norfolk rather a lot and one of the presenters had spoken about the bowel cancer screening programme. But the fact that it only referred to people between 60 and 69, if anyone was over 70 they were quite possible, it was quite possible for them to have the test but they would have to make the arrangements, and gave out the telephone number for them to ring which I wrote down and did ring and everything happened from then.

She wrongly thought the samples from her bowel motion had to be put on the card on alternate days.

She wrongly thought the samples from her bowel motion had to be put on the card on alternate days.

View topic summary
SHOW TEXT VERSION
EMBED CODE
PRINT TRANSCRIPT
What did you make of the information leaflet that came with the test kit? It tells you how to do it.

It was, yeah it made sense, so yes so it was okay, I didn't have any real problem with it, no, the instructions were fairly clear and yeah no problem, no problem at all.

Was it clear to you how many days you had to do it after you'd opened it?

It had to be done; yes I did mine on alternate days, they couldn't be done on three consecutive days could they? There had to be a time in between each sample.

I think they can be on consecutive days.

Can they, oh I thought'

It had to be within fourteen days of taking it.

Yes, I did mine on alternate days anyway, you know I thought well.

And you thought it had to be alternate days.

I thought it had to be alternate days, I thought there had to be a spell in between each one.

So you thought there had to be more than; at least a day in between each sample?

I thought there had to be at least 24 hours between each, each sample taken yes, yes. Yes I don't think, I wondered if I panicked into reading it wrongly, do you know what I mean when you read things wrongly? But no I was, I was fairly certain that it couldn't be consecutive days, there had to be a spell in between.

The nurse explained everything in detail and told her that she could ring her at any time if she...

The nurse explained everything in detail and told her that she could ring her at any time if she...

View topic summary
SHOW TEXT VERSION
EMBED CODE
PRINT TRANSCRIPT
And then you were invited to go and visit the nurses at the hospital?

Can you explain in detail what happened when you saw the nurses?

When I saw the nurse she explained the situation of the unit and the fact that the nurse and the surgeon seemed to work together as a team. A very small unit in the hospital, and she gave me the book that you showed me.

Information booklet yes. She was very good, she was very, she explained everything in great detail and as I say she gave me the, her telephone number so that if I thought of anything when I got home I could ring her without any problem at all.

Did she go through the pros and cons and any risk of having a colonoscopy?

Oh yes she did and she put the fear of God into me. She, yes she the fact that the bowel could be perforated, it all, yes she did go into all detail of what could, what could happen.

Did you have any doubts about going ahead afterwards?

Yes I did but I thought well now I've got this far you know you're in the system and you know, go through with it.

The nurse rang her with the result of the colonoscopy. The polyps that had been removed were...

The nurse rang her with the result of the colonoscopy. The polyps that had been removed were...

Concern, very concerned before the result came through. Yes, just great concern, and the people who knew that I had been, were concerned as well, you know, and rang up, which of course increased my concern really and truly, but yes it was a great relief when they rang up and said, and I got the letter about the same time, to say that they wouldn't need to see me for three years and that everything was clear so that was, that was terrific, that was really, really good.