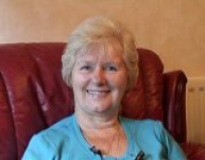 Age at interview: 63
Brief Outline: Screened in 2001, when aged 58. Faecal Occult Blood (FOB) test result normal. In 2003 had bowel problems, consulted her GP, who referred her to a consultant. She had a colonoscopy, with a normal result.
Background: A white British woman, in business, a widow with 2 children.

In 2001 she was invited to take part in screening for bowel cancer. She decided to take part, partly because her husband had been diagnosed with bowel cancer in 2000, but also because a friend had been diagnosed with bowel cancer as the result of screening. The result of her Faecal Occult Blood (FOB) test was normal. In 2003 she had some bowel problems, including difficulty with emptying her bowels, so consulted her GP, who referred her to a specialist. She then had a colonoscopy and the result was normal. Since then she has felt well. She has not been screened for bowel cancer since then because she had the colonoscopy in 2003, but she expects to be invited for screening again soon.

Thinks that screening ought to be available to everyone, including younger people.

Thinks that screening ought to be available to everyone, including younger people.

I think it is a excellent thing. I think it should be open and offered to everybody. I don't think age. I know age comes into it but I, I think they say that statistically it comes between a certain age. But I think these days and the way our life is today I think the age has got to come down because there are a lot of people, are younger people are now becoming to have bowel cancer.

Her husband had had bowel cancer, and friends' experiences also influenced her decision to be...

Her husband had had bowel cancer, and friends' experiences also influenced her decision to be...

View topic summary
SHOW TEXT VERSION
PRINT TRANSCRIPT
So was there any other factor apart from your husband's experience that influenced you to go ahead with the screening? Was it just mainly his experience?

No I, it was, yes he, he was a factor but I just thought that it was a good thing to do. Not only that from talking, from friends of mine that had actually done it and been picked up through it, so.

So you knew some other people who had had it?

Oh yeah, yeah and, and if she hadn't have been picked up at the time she told me herself because I saw her at the hospital when we were going with my husband for treatment. And she said, 'Oh you're here'. And I said, 'Yeah, you know it was my husband'. So she's, 'God if I hadn't have had that screening', she said, 'I wouldn't be here'. And that was the exact words she said to me.

And I know somebody else that was picked up with it as well but they were fine. They had to have the operation but they didn't have any follow-up but she did. And, and she's ok now.

The laxative she took to prepare for the colonoscopy was sweet and made her feel sick.

The laxative she took to prepare for the colonoscopy was sweet and made her feel sick.

The procedure before your colonoscopy is not very nice. It's one of those procedures where half; you know, when you're doing it you think, I can't do this. I've just got to forget it because it, it's the medication that you have to take. It's not even so much the fasting because you have to go on like a low-residue diet. You can cope with that. It's the day before when you have to take the fluid and that's all you take. And it, oh, it's, it's so. I can't explain it. It's so sweet and it's, it. You could be sick. In actual fact when my son had it done he was sick. He just brought it straight back.

But you've got to do it. You've just got to just think, well get on with it and do it. That was the bad part, going actually in for the colonoscopy because I was asleep so it was just a prick in the finger and then I came round. And I was told that everything was fine.

View topic summary
SHOW TEXT VERSION
PRINT TRANSCRIPT
How long do you have to have a special diet for before a colonoscopy?

I think it's about three days. You build up three or four days. You, you sort of start off with, you can eat so many things and then the next day you have to cut that down. And then it gets down to where it's like just black tea and ice cream or jelly. And then I think the day before, if I remember rightly, it's just this liquid which is nothing. And so it's, it's not nice but it's part of the procedure and it's what you've got to do.

You just found a sheet telling us about your preparation for the colonoscopy. Can you tell us a bit more about how you had to change your diet please?

Yes. Well when they said that you had to go on a low residue diet the foods that you could have were sort of like clear soups, fish, chicken, milk, eggs, things like that. And obviously what you weren't allowed was the vegetables unless they'd been sieved, canned meats with whole vegetables, mainly I think vegetables must be the main thing that you're not allowed to have before you have your procedure. Brown bread, digestive wholemeal, things like that.

Those are things you can have or you can't have?

That you can't have. Foods not allowed. This is when you're doing your diet. And there was food, things that again you could have; rice crispies, cornflakes, white rice, not brown, sugar, jelly, tea, coffee. And then foods again that you're not allowed is the shredded wheat, puffed wheat, weetabix which is obviously all the, the fibre type of things, brown rice, raw fruit, skins, nuts, anything like that.

And you mentioned canned meat did you?

Yes I think it was canned meats with whole vegetables you can't have. I think it's mainly things like, well like that. That is, though obviously you, you need the lighter things because of it's sticking to the bowels and not going through.