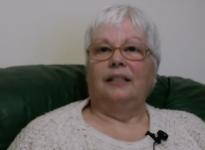 Age at interview: 65
Brief Outline: Penelope had partial knee replacement surgery in 2007 to her left knee and in 2014 to her right knee. She was happy with the care she was given but would have liked more guidance on the exercises. Both operations were successful.
Background: Penelope is a retired administrator. She is divorced and has one adult child. Ethnic background / nationality: White British.

In 2005 Penelope suddenly had pain in her left knee whilst running. She was prescribed painkillers by her GP but the pain got progressively worse over the next two years. It made her limp badly and everyday activities like housework became difficult. Penelope was referred to hospital, where x-rays showed that she had arthritis in her knee. She had partial knee replacement surgery in 2007.

The operation was successful and Penelope was able to resume the daily activities that she’d been able to do before her knee became painful. She could also stop using painkillers again. After a few years, however, the other (right) knee started to become painful and swollen. Penelope started taking paracetamol and ibuprofen again, and noticed that she was unable to do certain activities properly, such as swimming. After a couple of years of increasing pain and swelling, she felt that she needed further surgery.

In 2014 Penelope had partial knee replacement surgery to her right knee. She noticed a faster recovery than her operation in 2007 but, since the first operation, cannot kneel anymore. However, four weeks into recovery she is walking much better already. She is doing the daily exercises that were recommended but feels that it would have been helpful if the physiotherapist had shown her how to do the exercises so that she knows how to do them correctly.

Penelope feels that both her knee operations went well and that the healthcare was ‘excellent’, as was the information and support. She recommends partial knee replacement to those in a similar situation, and stresses the importance of doing the exercises and not feeling disheartened with the slow pace of recovery.

Penelope wondered when the follow-up appointment would be and if she’d have x-rays. She’d had knee surgery before but couldn’t remember.

Penelope wondered when the follow-up appointment would be and if she’d have x-rays. She’d had knee surgery before but couldn’t remember.

View topic summary
SHOW TEXT VERSION
PRINT TRANSCRIPT
Have you been given the appointment for the follow-up?

No, that’s something I need to phone up about. They said, "After three weeks, if you don’t get the letter, contact us," because I should get a follow-up…it should happen six weeks later shouldn’t it? Well it's been four weeks now so I'd better give them a ring I suppose [laughs].

And because you’ve had the other knee done, you kind of know what's involved with the going back?

I don’t actually, I've forgotten all about it. I don’t know what will happen; whether maybe they’ll do another x-ray will they?

I'm not sure, yeah. They will probably ask me questions – how I'm going on, what I can do, what I can't do and things won't they? Things like that.

Yes, yes, I think so especially for the first knee you'd want that I think.

Penelope was surprised that the physio didn’t go through the exercises with her, and sometimes wondered if she was doing them right. A video would have helped.

Penelope was surprised that the physio didn’t go through the exercises with her, and sometimes wondered if she was doing them right. A video would have helped.

So that would have been helpful would it?

I think so. I think just to know you're doing them correctly you know, yeah.

So that was given in leaflet; would you have found a video of the exercises helpful, so if you were given either a website or a DVD to put in would that have helped?

Yes, because you can see it happening then can't you and you can see what's correct and what isn’t, yeah.

So you’ve got your little booklet and do you feel OK doing the exercises? Some people mentioned they weren’t always sure if they were doing it right or they would have liked to see a physio.

Yes, yes that’s the thing. Sometimes you think, 'Am I doing it…' I mean there's one where you lie on your side and lift the leg that’s gone…that you’ve had done up and down and then it says something about, then turn over and lift it the other way and I'm not quite sure what it means. I think I'm doing it right but I don’t know. Because the picture in the booklet only shows you the first bit; it doesn’t show you how you do the second bit so, yes, a video of the exercises would have been very good, yeah.

Is there anything else that would have been helpful at all?

Not that I can think of, no.

The health professionals ‘couldn’t have been better’. They were attentive and Penelope thought the hospital was excellent.

The health professionals ‘couldn’t have been better’. They were attentive and Penelope thought the hospital was excellent.

They couldn’t have been better; they were excellent, really excellent. They were so attentive and that, you know, if you rang the bell for them they were there straight away and they couldn’t do enough for you. It was really good; it's an excellent hospital, excellent.

Was there anything that could have been done better in that respect, healthcare wise?

It’s important not to get disheartened if recovery feels slow. Penelope had both knees replaced and it’s been ‘very good’ both times.

It’s important not to get disheartened if recovery feels slow. Penelope had both knees replaced and it’s been ‘very good’ both times.

View topic summary
SHOW TEXT VERSION
PRINT TRANSCRIPT
Don’t get disheartened that you don’t think it's going fast enough – this was my problem this time. I've done really well but I had to keep telling myself I am doing well because I kept feeling…I think the thing is once you get back, the days are so long that you feel longer time has gone than has really gone on. So after a couple of days it's like it's been a week and you're thinking, 'Why aren’t I getting better quicker?' but not to be despairing, you will get better. So long as you do your exercises it'll gradually work, it has for me, yeah.

And you said that you would recommend anybody who's thinking about it [partial knee replacement] to go and have it done?

And both of them it's been like a half knee, partial knee?