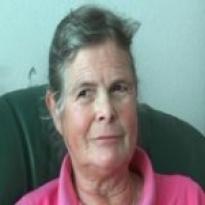 Age at interview: 68
Age at diagnosis: 40
Brief Outline: Julie, age 68, was diagnosed with asthma at 40. She is white British and married with six adult children. She is a retired learning and management consultant. Her diagnosis came as a surprise as she hadn’t realised it could develop later in life. At first she relied quite heavily on steroid based tablets, and a ventolin inhaler. Over the years however as newer medications were introduced she found it easier to keep control over her symptoms, which usually appear when she has a bad cold or respiratory infection.

Julie was diagnosed with asthma when she was in her 40’s. At the time she had had a cold which she found difficult to shake off. She was coughing a lot and her chest became painful as she found it increasingly difficult to breathe. It got to the point where she was finding herself virtually unable to walk anywhere because she could not breathe. After a couple of visits to the doctor asthma was diagnosed, which surprised Julie as she had no idea that it could develop later in life. Initially she was given steroid tablets to take, and a ventolin inhaler to use when needed. However as time went on and medication improved she found it easier to manage her asthma using both preventer and reliever inhalers, supplemented sometimes with a course of steroid tablets when she had a bad cold or infection.

Julie’s asthma is triggered when she has a bad cold or respiratory infection so she tries to avoid situations or places where she might be vulnerable but other than this there have been few things about her lifestyle that she has needed to change. She continues to take part in activities such as dancing and walking, although she finds the chlorine in swimming pools can make her feel wheezy so tends to avoid swimming these days. Other triggers such as petrol fumes, perfume and paint fumes are relatively easy to avoid.

Julie now takes a combination inhaler [seritide] which she takes two puffs twice a day, and finds that this successfully prevents her from having bouts of asthma. She also finds it helpful to use a spacer with her inhaler as this helps to prevent the sore throat that can be a side effect of the propellant in inhalers.

One problem that Julie has encountered is that her skin is now very dry and thinning, which she understands is a side effect from having used both inhaled and oral steroid based medication for so many years. Although she would like to cut down on her steroid intake in order to alleviate this problem, she knows that doing so would be likely to mean a return to experiencing asthma symptoms so she prefers to continue on the correct dose of medication.

Julie’s asthma was diagnosed in her 40s after a persistent cough. Until then she had thought of asthma as something children had and could grow out of.

Julie’s asthma was diagnosed in her 40s after a persistent cough. Until then she had thought of asthma as something children had and could grow out of.

View topic summary
SHOW TEXT VERSION
PRINT TRANSCRIPT
Well I’d, I had a... I went on coughing after a cold. I had a cold and this cough just didn’t seem to go away and it was really hard coughing. It was painful in my chest and I gradually got to the point where my, I was getting breathless and I couldn’t walk, I couldn’t get about. I mean, just walking a few paces I [draws in breath] heaving for breath.

How long ago was that?

This was 1982… and asthma wasn’t in my consciousness because I thought it was something children had and grew out of at that stage, I’d never heard of asthma appearing in your life when you were 40.

The next time I got a cold, similar coughing. I thought, “Oh dear, this is sort of with me,” you know. Not knowing anything about asthma I didn’t know it was a condition that was there for good. I didn’t know what was going to happen. So I think we moved that year, was it that year? It was either that year or the next year, we moved to [place] so change of doctor’s, change of lifestyle slightly because I was starting to commute and working in London. And I got very bad cold and I was given, I think, antibiotics for the cough and that didn’t really get rid of it.

Julie was initially given salbutamol tablets to take but they didn’t help. A different doctor tried her on steroid tablets which were very effective but Julie didn’t realise her symptoms could come back.

Julie was initially given salbutamol tablets to take but they didn’t help. A different doctor tried her on steroid tablets which were very effective but Julie didn’t realise her symptoms could come back.

View topic summary
SHOW TEXT VERSION
PRINT TRANSCRIPT
We were living then in [Place name], in [Place name] and the GP was an ex-RAF chap and he was one of these sort of no-nonsense, you know, chaps and came and said, “Oh well, you know, you, you, you could have died. Why didn’t you come to me earlier?” And I thought, “Thank you very much. Actually I’m quite frightened enough, I don’t need you to say things like that”. And, anyway, he gave me some, what are they called? Ventolin tablets, which made me feel very peculiar but had some effect but not a lot. And I took those for a few days and he, fortunately this doctor was going away because I got much better treatment [laughs] from his sort of locum that was standing in. And my husband took me down to the surgery in the evening at about six o’clock. I saw this lady and she was very puzzled because I’d been sitting in the garden, it was summertime, and I looked terribly healthy. I couldn’t breathe.

And she wasn’t an expert on respiratory things so she talked to somebody else and then she rang me up about eight o’clock that evening and she said, “Can I come and bring you something? I think I know what the problem is”. And I said, “Yes, of course”.

So she came with a steroid tablet or two and it took about 48 hours I was human again, quite extraordinary for me. I was, you know, here I had been bumping downstairs on my bottom people had been hanging my washing out for me and doing all sorts of things because I was just so incapacitated. When I went to the bathroom and I crawled because I, walking, I’d get too breathless before I got there. So the steroid was a real wonder thing. And that was of course before I knew what it might do to me later. But that’s for later in the story.

So I took the steroid pills and I can’t remember how long for. I think I took them probably for a fairly, not what we consider, or we consider it long now but I think then I, I took them at a fairly high level and came down gradually. But over quite a long period.

And after that I didn’t really expect it to come back, which was foolish of course. I thought, “Oh, I’m better. Nice”. You know.

Julie tries to avoid being near people who have colds. She steps up her medication when she has a cold or chest infection to try to keep her airways clear.

Julie tries to avoid being near people who have colds. She steps up her medication when she has a cold or chest infection to try to keep her airways clear.

View topic summary
SHOW TEXT VERSION
PRINT TRANSCRIPT
I know if I have a cold, so I avoid people with colds. My family have got to learn to know that if they’ve got snivelling children they shouldn’t come near me. I try and avoid large sort of shut in gatherings, where there might be people with colds. And if I hear them start to sneeze or they’re blowing their nose a lot I move away and I’m fanatic about washing my hands. I come home and scrub my hands as soon as I come in whenever I’ve been touching things out of the house. And that has served me very well because I’ve got a lot fewer colds.

I do remember at some phase with the consultant him saying to me, “If you get a cold and you get congestion in your lungs, and you don’t’ get rid of it, you’ve got stuff in there, mucus, then germs will think, ‘Oh lovely environment to get into’ and you’ll get more and it becomes a sort of vicious circle you can’t get out of. So it’s very important to make sure that you clear your lungs at the end of a, a cold or whatever’s caused it”. And that also has worked very well too. I try to make sure that if I’m given any extra medication or I up it that I clear my lungs so that I’m totally not coughing stuff before I, you know, go back to normal medication.

...you know, I suppose I’d been unwell for periods, you know, and instead of just having a cold and you’d recover, I mean, I’m, I always thought I’m just chesty and colds go on. If I do get a, a cold it goes to my chest and it takes me longer because I’m asthmatic to get rid of the mucus and stuff. So it’s a more long drawn out thing.

So I dread getting colds and try to avoid them. And when I was working obviously you’d have to go on working but I didn’t want to go take my germs, you know, I think if everybody stayed at home for the first couple of days and didn’t take it with them a lot of people who suffer from asthma and other things that go on from respiratory infections and things would be…life would be a lot easier.

People don’t, they, particularly now of course people, if you’ve got a job they’re trying to keep it and they’re not going to, you know, stay at home because they’ve got a cold.
Previous Page
Next Page