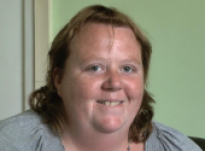 Age at interview: 28
Age at diagnosis: 26
Brief Outline: Michelle experienced her TIA at the age of 26. She experienced visual disturbance and was unable to speak coherently but after five or ten minutes the symptoms gradually subsided. She had several of these episodes over the following months which were not diagnosed specifically as TIA and then later went on to experience a full stroke.
Background: Michelle is single and lives with her parents. She is currently not working due to ill health. Ethnic background; White British

Michelle experienced her first TIA episode after having spent the day gardening ; she came inside the house to sit down and found she was unable to speak or articulate her thoughts and her vision was distorted. Although she did seek medical attention at the time, she was advised to see her GP in the next few days for a suspected viral infection and at that point TIA was not diagnosed or suspected.   When she later saw her GP she was told it could have been neuralgia or an anxiety attack. Over the next few weeks she intermittently felt sensations in her face similar to pins and needles but the likelihood of TIA was still not investigated by her doctor, who continued to treat her for anxiety.
Five months after the first episode Michelle was feeling tired one morning and her mother noticed that she was dragging her leg and not walking properly. She began to feel confused and disorientated and her mother called emergency services. Although she was taken to hospital at that point, a stroke was not diagnosed and she was sent home and advised to return to the hospital the following day to see a consultant. After undergoing a CT scan Michelle was told that she had in fact had a stroke. Michelle found this news particularly shocking given that she was only 26. She was admitted to the stroke ward where she remained for approximately four weeks during which time her right side was particularly affected in terms of mobility. Although she was provided with physiotherapy, Michelle feels that she was not provided with enough information or support about stroke and the recovery process by the doctors caring for her. She felt that the health professionals she came into contact with were not used to dealing with someone her age in respect of stroke, and therefore they were badly equipped to provide her with the support she needed, particularly in relation to her emotional needs.
After she returned home from hospital Michelle felt anxious and emotional about what had happened to her, and fearful that she might experience a further episode or stroke.
She routinely experienced a range of symptoms and feelings that she felt might indicate a further TIA but her GP continued to diagnose anxiety and depression as the cause, which made Michelle feel as though the doctors weren’t listening to her concerns. After discharge from hospital Michelle had physiotherapy and occupational therapy at home for some time to help with mobility but is not sure how helpful it was overall.
Michelle feels that she was not provided with sufficient information about TIA and stroke, both in terms of cause and prevention by the health professionals taking care of her. However since that time she has made efforts to improve her health by stopping smoking, taking gentle exercise and eating a more healthy diet. She feels strongly that it is important for health workers to communicate effectively with their patients and to listen to their worries and concerns because having a TIA and stroke can feel very scary.

Michelle continues to experience tiredness and has found it difficult to resume her normal daily activities. She has recently returned to work part time and in the meantime is thinking about starting up a support group for young stroke sufferers as she found that there were few opportunities to meet or talk to other people of her own age who had similar experiences.

For more of Michelle's interview see the Healthtalkonline website on TIA.

Michelle experienced a TIA before her stroke and feels that her symptoms did not correspond to...

Michelle experienced a TIA before her stroke and feels that her symptoms did not correspond to...

View topic summary
SHOW TEXT VERSION
PRINT TRANSCRIPT
I was just wondering about that the TV campaign on the stroke, symptoms of stroke. Have you seen that? The…
The F.A.S.T?
Yeah, FAST. Have you found that, I mean, would you say that’s helpful? Is there something about it that doesn’t really ring with you? Or could be changed to make it more effective? It doesn’t mention TIA for example, and do you think that, there’s a need for more public awareness about …
Well, yeah, if more people knew about TIAs they could prevent stroke in the, in the first place, so I would tend to focus more on TIAs than the stroke itself.
But the F.A.S.T. advert, there’s, it does have its advantages but it, they don’t show all the signs and, yeah, you’ve got to act fast but it doesn’t necessarily just affect your arm or your speech, there’s a lot more to it than that.
So there’s lot of different symptoms and signs that you could miss because they’re not part of…
Yeah,
..that campaign?
Yeah, you would just be looking for the arm and the speech and... it’s not necessarily that.

Michelle feels that is she was diagnosed sooner she would have recovered better.

Michelle feels that is she was diagnosed sooner she would have recovered better.

View topic summary
SHOW TEXT VERSION
PRINT TRANSCRIPT
I think if they’d had, if they’d had realised what was happening earlier they could have possibly stopped the big stroke from being as severe as it was and then my symptoms wouldn’t be as bad as they are. And it wouldn’t have impacted on me as bad.
So do you feel quite, a bit bitter about that? That they didn’t act on that, or understand what was going on in the first place to prevent that from happening?
Yeah.
Yeah.
Hm.
So in terms of your message for the health professionals in that case, what would that be?
Just because of the age doesn’t rule out anything. Young babies, children can have TIAs, stroke and people that are presenting with them kind of symptoms should be checked and not just disregarded.

Michelle found out that she had a stroke from her father. She was frustrated by the lack of...

Michelle found out that she had a stroke from her father. She was frustrated by the lack of...

View topic summary
SHOW TEXT VERSION
PRINT TRANSCRIPT
When you heard the word stroke and that, told that’s what’s happened, what did you feel?
I was really shocked to be honest because the, it wasn’t even the doctor that told me, it was my dad. As I came out from the CT scanner there was no doctors there and I could see by my dad’s face. And I said, “What’s wrong?” And he said, “You’ve had a stroke.”
How did he know?
I don’t know.
Oh.
I presume the doctor must have been in the room when I was being scanned and he’s come out and told my dad I’d, I don’t know.
I think because we are a lot younger doesn’t necessarily mean we don’t want to know what’s going on. Instead of going to parents or partners they need to focus more on the, on the patient and tell them what’s going on rather than everybody else because if we don’t’ understand that makes it so much worse for us.

Michelle felt that staff did not explain what was happening to her.

Michelle felt that staff did not explain what was happening to her.

View topic summary
SHOW TEXT VERSION
PRINT TRANSCRIPT
They didn’t explain why it was happening. And for me that made it much worse because if they had explained to me I could have understood.
Did it feel difficult to ask questions? Would it have felt difficult, do you think?
It did, yeah. Because they’re much, much used for it for older people so they just kind of do, did what they would normally do, for me, for them, which wasn’t acceptable.
Do you think that they were inexperienced in dealing with a younger person that had a stroke?
For younger people, yeah.
Right. And so in the ward that you were in, were you, were there anybody else your age or was it mostly older people? Do you remember?
I would say the youngest person there was about 70.
Right. I mean, in the whole scheme of things then how did that make you feel being in the hospital and the health professionals not really communicating very effectively with you?
I think that really impacted on my recovery, because I really suffered afterwards.
In what way?
I kind of like went into a depression but it wasn’t a depression, normal depression it was from the stroke. But it was so bad, even medication didn’t help.
Previous Page
Next Page