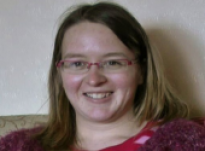 Age at interview: 23
Age at diagnosis: 21
Brief Outline: Jessica is 23 years old and had a stroke 2 years ago when she was 21. She has now recovered from this and is no longer receiving rehabilitation treatment.
Background: Jessica is a reflexology student. Her ethnic background is white.

Jessica is 23 years old and is studying reflexology. Two years ago, when she was 21 Jessica had a stroke. She was cleaning her car when her leg and arm went numb, she collapsed and although she could hear and process what other people around her were saying she could not respond and she describes how her speech became ‘garbled’. Jessica remembers how when the ambulance arrived they were unsure if she was experiencing a stroke or a panic attack. Once in hospital and after various tests it was confirmed that Jessica had had a stroke.
Before this Jessica had assumed that strokes only happened to older people and so was shocked to find this had happened to her. She felt very upset for days afterwards and it took a while for the diagnosis to sink in. During her recovery Jessica had physiotherapy, occupational and speech therapy. Jessica found the toughest part of her recovery was learning to speak again. She found this very frustrating as she recognised words but could not make sense of them or say them. Jessica describes how she recovered relatively quickly and believes this was because of her youth and the determination she felt.
Jessica has also experienced other issues with her health. Before having a stroke she was diagnosed with rheumatoid arthritis and after her stroke it was discovered that she also has a condition which makes her blood clot faster. More recently she has been diagnosed with lupus. Jessica describes how she feels frustrated that so much has happened to her in the last two years and how she’s always thought of herself as a healthy person. Jessica believes her stroke was caused by side-effects from the medication she was taking combined with her blood condition. She is now on daily medication to counteract this and prevent another stroke.
Having a stroke had impacted on Jessica’s abilities. She occasionally stutters over her words and has become more forgetful, tired and hesitant. When Jessica experiences these effects she explains to people that the reason is because she has had a stroke. Jessica describes how people are often surprised and sometimes suspicious, as they do not realise or believe young people can have strokes. Jessica feels there should be more general awareness that younger people, even babies, can have strokes.
Jessica explains how the experience of having a stroke and recovering from this has made her a stronger person. Jessica feels her priorities have changed as she now focuses on the things she enjoys in life and gives the example of the ambition she feels to start a career in reflexology. She describes herself as being more determined and less concerned with trivial things. Jessica is very grateful for her family, friends and boyfriend as she describes how they have been exceptionally supportive throughout.

Jessica experienced her stroke while she was cleaning her car. When her neighbour tried to help...

Jessica experienced her stroke while she was cleaning her car. When her neighbour tried to help...

View topic summary
SHOW TEXT VERSION
PRINT TRANSCRIPT
I was actually cleaning the car when it, I sort of first, well I was cleaning the car on the inside and I felt like my right arm. I went to open the door and my right arm was sort of like just like fallen and stuff. So I was like, “Oh.”
Were you driving, or was …?
No I was parked outside.
And so I went inside and I was feeling a bit sort of dizzy and a bit sort of, oh, a bit spaced out and things. So I was sitting at the table and then my next door neighbour asked me to move the car and so I sort of went, I was stood up and like my, my leg started to go a wee bit and I was just a bit sort of like wobbly and things. And I went outside and I fell sort of under the door, of the neighbour and then I was sort of, she was speaking to me but I couldn’t say anything. It was just a sort of like garbled message type thing. I could hear everything she was saying and I could sort of process it but it was just a bit sort of like garbled, my speaking.
It just came on all of a sudden. I was just cleaning my car and then all of a sudden my numb, my leg went numb and like my arm went numb. It just was cut off like, it just was, I could feel just like cut off from the shoulder.
It did. It was quite frightening. I think when I initially sort of collapsed and my neighbour’s daughter I had, I was crying and crying. And I think I was probably having a panic attack as well because I didn’t know what was going happening and of course I couldn’t speak.

Jessica talks about her other health conditions in addition to her stroke and how this has...

Jessica talks about her other health conditions in addition to her stroke and how this has...

View topic summary
SHOW TEXT VERSION
PRINT TRANSCRIPT
Were you given any indication as to what caused you to have the stroke?
I have, well I did, I have a blood condition which makes my blood clot a lot faster. And I was on the pill. And I was on a drug for my rheumatoid arthritis and they say that rheumatoid arthritis can cause strokes anyway. So it was a combination of like a few things.
Oh right. Yeah. Were you aware of those risks before?
No.
OK. Did you look, I don’t know did you look back at the medication you were on to see what was said?
Yeah.
And did it say something about that like
Yeah.
..it’s a rare occasion or something was it?
Yeah like, like 2% of people…
Yeah.
..you can have.
You must be gutted?
Yeah but we didn’t find out I had a blood condition until after I had my stroke.
It’s quite tough sometimes. I get quite frustrated that it’s sort of all happened to me like in few, in like about two years, like I had, I was diagnosed with rheumatoid arthritis. Then I had my stroke. And then I’ve just been sort of diagnosed with lupus and things like that and it’s just.
Oh really.
… it’s sort of all come together in like the two years and I’m like, I used to be so well [laughs]. Type thing. Like when I was younger. But, I still am but it’s just quite frustrating.
Is lupus something that you would have had for a long time that they’ve only just discovered or …
Yeah. I think…
..it’s a hereditary, is it a genetic …
I think so …
…condition or…
...so, yeah They say that I could have had it since I was wee because I used to have quite, I used to get quite sensitive skin, when I was out in the sunshine and then I used to get I used to get like chest pains when I was a bit older and then it sort of came to a head last year.
Previous Page
Next Page