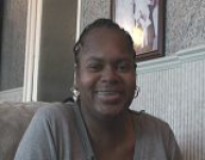 Age at interview: 41
Age at diagnosis: 40
Brief Outline: Diagnosed a year ago. Sylvia takes metformin, simvastatin and amlopidine.
Background: Sylvia is an administrator who lives with her partner and has one son aged 11. Ethnic background/Nationality' Black British.

Sylvia found the information she got on the internet more useful than the doctors.

Sylvia found the information she got on the internet more useful than the doctors.

The doctor sort of gave me some information but I just didn't understand it, because, you know, I went out and bought myself a machine to prick my finger, and he's telling me that those machines don't really give true, accurate readings, you know, like what the you know, when you give a blood sample at the doc, at the hospital, that would be. But obviously you can't go to hospital all the time to have blood tests and you know, he explained it. But I think if they gave you more paperwork, you know, literature that explained it, that might help, rather than them telling you and then you come back there and you think, 'God, what did he say again?' Because you just forget.

So you didn't have any leaflets to take away and read?
No, what I did, what I did myself, I went on the internet, and I started to looking up organisations you know, finding out about diabetes. I did sign up to one, I can't remember, I think it's Diabetes UK, I signed up with. Yeah, I think it's them, because I think they, that that's the one where you can monitor yourself on their website, you know, your levels and things like that because they gave me, they sent me a lead that I can just plug into the... Which I've never used [laughs].
But that's what I did, I just, and I sort of like made my own little folder. I printed all this information off the website, and I made a little folder that I could sit down and go through it and read to find out what I should be doing, what I shouldn't be doing. And I found that's what been more useful than, you know, the doctors really.
But, you know, the nurse sort of gave me a little bit, what I could eat, what I couldn't, and exercise and she sort of, vaguely sort of told me what could happen, you know, with your feet and things like that. But I've found, you know, more useful from the internet.
Previous Page
Next Page