Stuart - Living with a urinary catheter 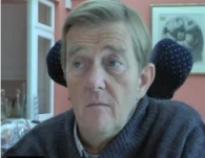 Age at interview: 61
Brief Outline: Stuart is retired. He is separated and has 3 adult children. Ethnic background / nationality' White British.
Background: Stuart broke his neck in 1997, aged 47, when he fell into a river whilst on a fishing trip. He became tetraplegic. He worked with an organisation that designed a leg bag emptying device powered by his wheelchair. He has a suprapubic catheter.

Stuart says he was given 'grossly inadequate' information. He thinks patients should be shown a catheter before one is inserted and told how it stays in place.

Stuart says he was given 'grossly inadequate' information. He thinks patients should be shown a catheter before one is inserted and told how it stays in place.

View topic summary
SHOW TEXT VERSION
EMBED CODE
PRINT TRANSCRIPT
Certainly in my case, and I think it most likely would be true for many others, if it’s through an accident or something of that sort anyway, you go from knowing nothing whatsoever about catheters, to suddenly having one implanted. And the amount of information that you are given is grossly inadequate. I can only remember the most rudimentary things being passed onto me. And it was rather, “You don’t need to worry about that, the nurses will do all that you need.” And, unless you take a personal interest and ask a lot of questions, you don’t get told. You’re just “done to” rather than become a part and a controlling interest in what is being done to you.

I believe it’s something like 37 years since the Foley Catheter was invented. The first thing is I think that every patient should be shown before the catheter is inserted in them what actually happens. Because you’re told there’s a balloon. You’re not told whether this is a balloon on the end of a sort of string that floats around inside your bladder like a party balloon or what. It’s not explained that it’s like a lifebelt, tightly round the catheter itself and how it’s inflated. All of these things, because it’s inside you and you don’t see it, I daresay most people haven’t seen a catheter with the balloon blown up. I think you ought to be shown so that you know how it stays in, why it stays in. How much of the tip of the catheter is there, if you pull on it, what you’re pulling against, and similarly that the tip of the catheter, if that’s rubbing against your bladder wall consistently, the irritation that that’s going to cause. All of that I think should be explained in the early stages, when you’re first fitted with it, or in a brochure that you’re discharged with.