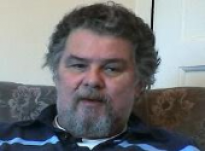 Age at interview: 59
Brief Outline: Roger was married to Teresa, who was diagnosed with bulbar onset MND. She died a year ago, aged 64, less than six months after the diagnosis.
Background: Roger is a mini-bus driver, widowed, with 5 adult children. Ethnic background/nationality' White British.

He knew his wife Teresa, who had MND, would not have wanted invasive ventilation to keep her alive.

He knew his wife Teresa, who had MND, would not have wanted invasive ventilation to keep her alive.

Unfortunately by this time we're talking approaching Christmas of 2005 and Teresa's condition had deteriorated quite significantly. She was having difficulties, severe difficulties, with swallowing and the hospital were saying to her that she should be having a PEG tube fitted. She wasn't terribly keen on that idea but was allowing the family to persuade her to have it done because we wanted her round for as long as possible. And she said that she would like to get Christmas over and then, OK, she consented that she would have it done. During Christmas she appeared to develop a chest infection which is obviously the thing that we were all most concerned about, the thing which is most dangerous to people with MND particularly ALS or bulbar onset. Shortly after Christmas she was admitted to hospital as a result of the chest infection but with the use of antibiotics and intensive physiotherapy and oxygen she was able to be discharged.

She was discharged less than a week and whether it was another infection or if it was the same infection returning we don't actually know but was then re-admitted again to hospital, not the same hospital as an emergency with breathing difficulties. We did while she was in the hospital this second time in January look at the feasibility of a transfer to the hospital that would do a PEG tube. The reason that we were looking at that was because obviously the primary concern was fighting the chest infection but while Teresa was fighting this chest infection she wasn't taking nutrition. And for somebody who was only seven or eight stone can't afford to lose much and she was clearly losing weight rapidly. With everything going on obviously she probably didn't have much of an appetite.
Eventually the hospital did start to feed her intravenously. Her breathing difficulties got worse and worse. And we went from oxygen to positive pressure ventilation and the use of a, I believe it's called a Nippy Unit, which initially I understood was usually used only at night. But within days she was virtually living in it and still having considerable difficulties in clearing her chest and needed almost constant physiotherapy in order to breathe.
We had at times, at the time when she could communicate effectively I had discussed with her where she herself wanted to draw the line. We did not want to do, embark on any procedure that she, herself, I knew did not wish to consent to. And reinforce that, to, with Teresa, with Teresa had actually given me her power of attorney, an enduring power of attorney so that I could obviously speak for her authoritatively with the healthcare professionals. Her dividing line, the PEG tube was close to it but she had indicated that quite definitely she did not want invasive ventilation. That was, that was her definite line in the sand.
It actually wasn't discussed as an option at the hospital. They were using the positive pressure ventilator and high levels of oxygen. And perhaps they felt that invasive ventilation wouldn't have given any improvement over what they were already doing anyway. I suspect that was the case. And that was the situation when Teresa finally passed away on the 31st of January 2006.
Previous Page
Next Page