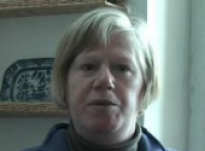 Age at interview: 57
Brief Outline: Mary describes menopause as 'the most fundamental loss' ending her hopes of becoming a mother. Her decision to take HRT to improve poor memory was 'like a miracle'. Withdrawal on doctor's advice after 5 years, however, saw a return of symptoms.
Background: Mary is a self-employed charity consultant. She is married with no children. She started the menopause at age 46 and had her last period at 53. Ethnic background/nationality' White British.

And so I was referred by my GP in London to a specialist, I suppose they are obstetrics and gynaecology people but she was actually a specialist in managing the menopause, and she put me on HRT; which was like a miracle. I mean it was completely rejuvenating. I was still having occasional periods, maybe once every three, two maybe two, three, four months, and it was something called, “Do you want me to mention the name of the drug?” it was called Premique Cycle and I went on to that and it was like being rejuvenated. All that weight I was putting on dropped off, I felt my libido came back, my whole ambition, all that kind of I want to make my work really work. I was running a medical research charity at that time called [name], and it was a very very busy job and a lot of pressure with lots of staff and very hard work. And I felt I was capable of doing it again. It was really marvellous. So my experience of HRT was unfailingly excellent.

It was about six years ago when I came to live in [city] and when I was obviously transferred from my old GP to a new GP that she said she was very opposed to women staying on HRT and that I should come off and I’m an obedient woman and didn’t think twice and so I just simply stopped taking it. And it wasn’t until quite a lot later that I discovered that that was completely not the right thing to do and so all of those symptoms that I’d been complaining about previously, the hot flushes, the loss of libido, the lack of concentration, the weight gain, they all came back in such a massive rush I thought I was dying. I mean I thought I was literally on, I just couldn’t believe it. But I did cold turkey and I came through it.
Previous Page
Next Page