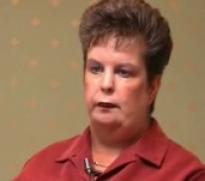 The treatment options were all explained. She was given information and an opportunity to talk to other people about methotrexate.

The treatment options were all explained. She was given information and an opportunity to talk to other people about methotrexate.

View topic summary
SHOW TEXT VERSION
EMBED CODE
PRINT TRANSCRIPT
Have you felt that in the past you've had a choice in what you've been prescribed?

Very much so. With the exception of my first experience at my local hospital when I lived in another part of the country. But since then I have always felt that my, my concerns regarding treatment were taken fully into consideration and there were options. It wasn't, 'Well take this,' you know. The choice wasn't you can take it or not take it. The choice was, 'Well if you're, why aren't you comfortable, can we talk about it? I think it's the best treatment but if you really don't want to take there is X, Y and Z.' So there were always been options for me. And I think that's quite comforting.

And, and you've felt you were given enough information to make a decision on?

Yes. Yes. Like, going back to the methotrexate, I was given a month cooling off before it was even agreed. There was absolutely no pressure for me to go onto second line drugs without me having had a chance to see all the information and talk to other people. I'm probably luckier than most people because of the work I do I've got people that I know are taking these drugs and I know there's a big pool of support.

The same with surgery, if I did go down that route, I've got people that I can talk to that have had the surgery that's been suggested so, yeah, there are, you know, there are options.
Previous Page
Next Page