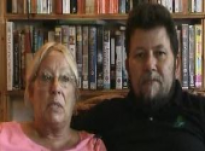 They were shocked when a nurse asked them, in a roundabout way, to consider turning off their son...

They were shocked when a nurse asked them, in a roundabout way, to consider turning off their son...

Mother' They kept him [son] sedated for about five days and then decided to bring him round again and do another CT scan. He was still fairly agitated, and the CT scan showed multiple infarcts across the entire surface of his brain. Now this was about eight days in to the attack, to a point where I thought in my ignorance that he had survived and therefore he would survive. I thought he was desperately ill, but I thought he was safe. When they had the second CT scan, actually the third, because they took one in the first hospital, but the second one at that ITU, they sent it to the regional centre for an opinion. And the opinion was that he could not survive. But if by chance he did, he would be in a persistent vegetative state.

So a doctor and a nurse took us aside and told us to prepare ourselves, and in a roundabout way asked us if we wanted to turn off the life support. And this was a desperate shock. Because no way had we been prepared for the idea that he would not survive. And the longer he survived, the more likely it seemed that he would. And we came home kind of on autopilot.
Father' Yes, we had to drive about 12 miles from that hospital to our house. And it was in some kind of odd state. I can't tell you how I got home.
Mother' We were just driving slower and slower, just kind of…
Father' But they told us to go home and consider our options. But they didn't explain to us what our options were. And because my wife has worked in the medical area for quite some time, we could conclude what our options were.
Mother' Which was do not resuscitate and organ donation, those were the only things I could think of. So I called one of my colleagues, who's actually a bereavement counsellor. And she came immediately and was very supportive through…
Father' It's okay.
Mother' Sorry.
Father' It was a very black time.
Shall we take a break?
Father' I think, no, it might be better if we can carry on.
Mother' Yes. While she was here, the consultant rang and said, “No, forget all that. Don't worry about that for the moment. What we're going to do, we've got a plan. We're going to put him back to sleep for maybe a couple of weeks and then wake him again and see how he's doing”. And she immediately said, “You know, if they've got a plan, it's not as bad as you might have been led to believe. They wouldn't have a plan if it was that bad. They'd just let it go”.
Father' The key thing was that they didn't know. They didn't know what the outcome would be. They'd sent a photograph to a local centre of excellence, who'd gone, “Oh, it's desperate”. But they, this particular consultant obviously thought, “Well, we don't know that that's the case”.
Mother' Yes.
Father' “We're not going to give up on this lad yet” was his words when we saw him the next day.
Nobody could say, “This would happen.” What they should do is be sure if they say, “This will happen” that that is the case. If they don't know they should say, “These are the possibilities. And these are, you know, this is the possible outcomes.” Or, you know, they need to be more careful about saying, “Thi
Previous Page
Next Page