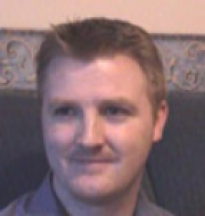 Age at interview: 31
Brief Outline: Partner was diagnosed with RA at 25 has had the disease 5 years.
Background: Partner' Pensions administrator, lives with partner, no children.

He has got used to injecting his partner with methotrexate weekly.

He has got used to injecting his partner with methotrexate weekly.

View topic summary
SHOW TEXT VERSION
EMBED CODE
PRINT TRANSCRIPT
Yeah, once a week we've still got to do the methotrexate, originally she took it in tablets, she got brave enough to have that as an injection now. Originally that was done by the GP, but she has, I mean she has to have blood tests every month just to keep track of how stable the RA is but it, it got to a point where, you know, we were going for blood tests, going for these injections so in the end, I've, basically, I've sat through seeing how it's done, give her the injection myself which I'm not the most popular of people at the time but it saves leaving the house really so. One day a week of being in the doghouse isn't bad I suppose [laughing].

So you give her the injections?

Yes, I give her the injections, yeah.

How do you feel about that?

I was very nervous at first you just, I mean it, from the point of view of never being in the medical profession and giving injections it was, it was really daunting, and when you had to wear the gloves and cover your eyes, you don't know what you're getting involved in, it scares [laughs] you a little bit but it wasn't too bad, I mean, it's gotta go just under the skin not actually in the arm so you don't have, you don't have to find a vein or anything like that. Practice makes perfect, we'll put it that way [laughs]. I can do it now nowadays quite quickly for a long, long time I think I was just as nervous as she was but like I said nowadays, I try and do it when she's not expecting it, I wait until the soaps come on or something like that [laughs] so we're alright now, we're, we're getting there [laughs] I'm still not popular when it comes round to giving the injections.

Partner worries about his wife having to stop medication to start a family.

Partner worries about his wife having to stop medication to start a family.

View topic summary
SHOW TEXT VERSION
EMBED CODE
PRINT TRANSCRIPT
The one, I would say the one thing really that we do tend to sort of look at is obviously starting a family. Not, it's not so much from the, from the treatment, it, it's from the point of the view that, she, she'd have to come off treatment, full stop. It's the thought of, you know, going back to how she was, it's, you know, something, well I'd, I'd feel really guilty, I mean, obviously it's, it's, it would be her decision at the end of the day if she wanted to go through with it but we do talk about it and it's, it's one of those things that is at the back of the mind really sort of, it's a bit of a nagging thing. I think that's the biggest, biggest worry we've got at the moment, so.

Yeah, it's a big thing really, isn't it?

It, it is really. I mean, you, you haven't got just, you've got, I think it's six months beforehand you've got to just wash out all the, all the drugs anyway so you've got that six months and then obviously, excuse me, the, the time of pregnancy so that'll be a long, long, long time to go without, I mean, yeah, going back to how it was, that would be a scary thing, really.

Have you been able to discuss that with anybody?

We, yeah, I mean, it's, it's something we've spoken at the hospital because, you know, we, we have talked about a family sort of in the next few years. They put it straight they just said you would have to come off the treatment, you're going to have to take a hit on it in that sense so it's, it's, it's a, there's two big things to weigh up really. At this point in time, there's, there's no easy solution so it, it's, it's something that I am concerned about more so for my partner than me, because, you know I can do, I'm just gonna have the one but you know pregnancy's a bad enough thing on its own but when you've got that, it's a double whammy really.

His partner's pain had interrupted their sex life, which was frustrating for both of them.

His partner's pain had interrupted their sex life, which was frustrating for both of them.

View topic summary
SHOW TEXT VERSION
EMBED CODE
PRINT TRANSCRIPT
It must have affected your sex life as well? I mean, how, how do you cope with that?

Yeah, well I mean obviously you, things like sport, and things like that are out of the question, so that would be as well. You, yeah, you tend to really sort of go back to you know when you first meet and start, and it's almost like starting again really [laughing], it did, I mean it obviously, it had to put a stop on it for a while because she was in so much pain, you just, you just get, it's, it's strange really because when you do come out of the other side and she starts getting a bit better she did find she was shy again starting from scratch because, you, it's been so long, you know, in that situation, that you do find, it's quite new when you go through it that, that was hard but that, that was hard for both of us, so it was an equal thing really.

I mean we do, we do chat about that but because it was something we're both probably a bit frustrated about it, because you knew the other person was as well you just, get, each of you going through it  but yeah, I think going back like I said, I mean, [plates clattering] if you're, for me, I mean, the first thing I wanted was for her to get better and then obviously that would have a, an impact on that so, it gives you an extra drive to really sort of you know, obviously get something sorted on that, yeah.

Has learnt over the years when to help his partner and when to accept she wants to do things...

Has learnt over the years when to help his partner and when to accept she wants to do things...

View topic summary
SHOW TEXT VERSION
EMBED CODE
PRINT TRANSCRIPT
She, I mean, she likes to be able and do things herself so to a certain point she would. It, I've got to be honest, I could after a while see when I really knew she needed things, and probably earlier on it was more frustrating, she probably was less, less inclined to sort of ask for help until it got to a point where perhaps she's got no choice. Nowadays, because she's had the illness for a fair few years, it's not something she probably does really have to, she doesn't hold back on because we're used to it, we deal with it, it's part of our life, whereas before when it was new, it was almost like, you know, frustration that we'd like always had to keep things to yourself and just try to do things, stupid things like taking shoes and socks off, things like that.

There's going to be days when we've still go to do that there's no, there's no crime asking for help, but it's taken a few years to get that point which I could probably understand because, not it's, I mean, I cope from that point of view, it's, it's not dignity anything like that, it's just frustration of not no.., not being able to do day-to-day tasks yourself and that, that did, I could tell that bothered her because she, she didn't want to sort of have to rely on people like that.

Nowadays you know, we've, you get a lot of good days, but there's gonna be the odd bad day and you've got to face that and I think it's, it's taken a long time to come through that and realise you do, you do need help on these things. So she's, she's good like that now, but it's been so, it's been a while, I can, I can sense it as well, you, you do get a sixth sense for when it gets bad and you know you just keep, I just keep bothering her sometimes if I know it's, you've gotta do it sometimes because if you badger someone long enough, then they'll think 'oh, you know, sod it, I'll let you do it' [laughs]. Yet, it's, it's not too bad now but it was a problem.

Attended his partner's appointments and felt it helped that both of them were able to hear the...

Attended his partner's appointments and felt it helped that both of them were able to hear the...

View topic summary
SHOW TEXT VERSION
EMBED CODE
PRINT TRANSCRIPT
We used to come home, you know after a test and that and I mean, there's obviously, there was things I, it was good really because there was things I'd pick up what the doctors would say, and there was things she would pick up and you'd find because you're in there and you can get blinded with science but you can pick up different aspects at different times and it was useful really because from that point of view we could bounce off each other and you know if someone was in a particular day where they just didn't feel like taking it all in, the other person possibly was. So yeah, I would say it was probably a mixture really, I mean the leaflets were good but it, it was more of a spring board to sort of looking more onto the internet as well.

So you feel that your wife valued having you there when she was seeing the doctors and having the consultations?

Yeah, I mean there's, there's a lot to take in to be honest and you always, you'll come out afterwards and you always think, I wish I'd have asked that or I wish I'd have questioned this, which sometimes, I mean you still get that but a lot of the times, we were, you know, I'd butt in and then that would lead her to say something and so yeah it's, it's always, I think it's always, if there's, if there's more than one of you then you know it gives twice as much sort of oomph to really sort of you know question things. So yeah, I think it was useful, useful for me as well. I'm sure it was for her as well.

How much have you felt that you've been included in the consultations and how, how well do you think the doctors have communicated with you?

Very, the current hospital she's seeking treatment have been very good they're very friendly and I mean, they don't, they don't even mind with me, I sit in or anything like that. With the GPs, it wasn't probably so much because of them or.., because it was earlier on it was one of these, I mean most of the time you go to a GP, you go by yourself , when it did get more serious I think, I don't know whether it's probably something hospitals are more sort of inclined to let, let you do and also moral support. So from that point view there was no problems, no problems and like I said I mean, it, it was useful.