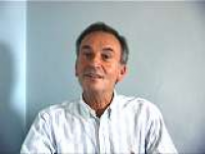 He wished he had talked to a trained counsellor before he had the PSA test.

He wished he had talked to a trained counsellor before he had the PSA test.

View topic summary
SHOW TEXT VERSION
PRINT TRANSCRIPT
These were more PSA tests, they in fact took about a month to come through and each day I was phoning the consultant's secretary, first of all getting to the hospital switchboard "Could I speak to the consultant's secretary," she might have been out and then each time she would have to shuffle through a set of papers to see whether my results were in. Each time it seemed to me like waiting for an order of execution of death and this went on day in day out and feeling this terrible feeling of apprehension, cold sweaty hands, 'am I going to live, am I going to die' kind of feeling.

If PSA is brought up in the course of a medical interview when people are really thinking about other things, they are not going to take it on board. I mean I don't think at the end of the interview I could have gone out saying PSA stands for Prostate Specific Antigen. I didn't think of it as a test for prostate cancer. I'm sure he said something at that time but I don't think I gave informed consent if you like.

And there seems to be a sort of general assumption that for all men the objective will be to live as long as possible and I don't happen to agree with that viewpoint at all. It may be appropriate for many men, particularly family men, with growing grandchildren and so on, they want to see their grand-daughter getting married or their great grandson getting baptised, whatever. But for other people it will be the quality of life and the quality of life means being, or at least feeling, healthy that's the more important thing. And I would have liked very much to discuss these kind of issues with a counsellor, possibly trained by the consultant himself or herself.

I wish I had never had the very first PSA test. But it was my own fault, I can't blame the urologist in Washington, I could have asked for more information or thought about the consequences, it just did not occur to me, it did not seem to be a major thing at the time. It wasn't presented as a major choice to me and I didn't think through it.

He had the PSA test primarily to humour his urologist. The result left him feeling extremely...

He had the PSA test primarily to humour his urologist. The result left him feeling extremely...

View topic summary
SHOW TEXT VERSION
PRINT TRANSCRIPT
It started about 18 months ago when I was working in Washington DC in the States, and I went to a local urologist because I had marginal impotency problems and I wanted him to prescribe Viagra for me, which at the time was difficult to obtain through a GP here. He agreed to do that but then he asked me whether I'd recently had a screening test called PSA and I immediately responded that I'd never heard of PSA and what did it stand for and what was it for? And I don't think I really took in what he was saying but I agreed to take the PSA test primarily to humour him rather than because I'd really considered all the risks and benefits of taking such a test.

He did examine me with a digital rectal examination at the time and that was normal and since I'd got my Viagra tablets I simply forgot about visiting him. And so I was somewhat surprised about 3 weeks later when he telephoned me about 10 o clock at night at my apartment and said my PSA level was very high, much higher than normal, it was about 9ng per ml and that I should take it very seriously although it didn't necessarily mean I had prostate cancer and he suggested I have a biopsy straight away. Well I was just about to finish my turn at Washington and go for a months visit to Venezuela and a biopsy wouldn't have been appropriate. But obviously I did feel a great sense of, well fear I suppose, because this was the first intimation that I might have a problem in this connection. I didn't really have any symptoms and suddenly I was faced with my own mortality. So it was a most anxious time and I remember rushing round to the book shop and buying 4 books on prostate cancer and reading them up and being absolutely horrified about the treatments on offer. Surgery seemed to me more like butchery than surgery and so I was finding it very difficult to sleep at that time.

Suggests that having a PSA test requires very informed consent, in the same way that patients...

Suggests that having a PSA test requires very informed consent, in the same way that patients...

View topic summary
SHOW TEXT VERSION
PRINT TRANSCRIPT
But for somebody like you it might not have been the right thing to do?

Well I think they'd also have to consider how they would feel about the surgery or the radiation treatment if they were found to have cancer and what kind of decisions they would make. So I think, my principle point is really that it requires a very informed consent in the same way as patients have to give informed consent to say an HIV test, it's not a question of a GP saying to a patient "Oh if I were you I'd have an HIV test," they need to be told the consequences, that's what happens with HIV I suspect it isn't happening with PSA tests and I think it definitely should. And people should be taken through the worse case scenarios and see how they would cope with that.

Has a PSA test every 6 months and feels very anxious just before he gets the results.

Has a PSA test every 6 months and feels very anxious just before he gets the results.

View topic summary
SHOW TEXT VERSION
PRINT TRANSCRIPT
Is it still affecting your every day life at the moment, do you feel anxious on a day to day basis because of it?

Not really in between PSA tests but then you come up to a period where you're going to have another PSA test and the old anxieties sort of return. You know particularly the few days leading up to getting the results and you realise that the figures could go anywhere and it's kind of again a possible execution order as I see it, it's as extreme as that. Well if you were told that you had figure of 20ng per ml well that would almost certainly indicate that you had prostate cancer.

And please tell me again how long are you having to wait between the blood tests and the results now?

In Britain about a week, it was longer in the case of the USA rather surprisingly.

In Britain I get the results over the telephone so I really can't fault that. I do feel that those results are the patient's results, they are figures relating to the patient's condition and I don't like any feeling that the health authorities can, or should protect the patients from these figures, one needs to know them to make the right kind of decisions.

So now you're having a PSA test every 6 months?

And I can see it's had a huge effect on your life this PSA testing?