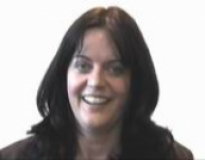 The midwife kept telling her to take gas and air but she knew it would make her sick. Then she...

The midwife kept telling her to take gas and air but she knew it would make her sick. Then she...

While this was going on, who was looking after you? Who was in the delivery suite with you?

One lady in particular was an older lady and she was like the first one to look after me. She was a little Irish lady and she kept saying to me, “Take the gas and air.” But I knew from the previous one that I couldn't take the gas and air because it makes me sick. And she kept putting this thing in my mouth and telling me to suck on it and I kept saying, “I can't because it makes me sick.” And she just didn't listen at all so eventually I took the gas and air off her, blew into it and then vomited all over her because she wasn't listening and I'd told her at least half a dozen times that I couldn't take it, it would make me sick. I had to show her, so I did.

So you made your point?

Okay. So once you'd been sick all over her, I presume then she believed you, that you couldn't..

Her second labour was long and stressful and communication with staff was poor. She had an...

Her second labour was long and stressful and communication with staff was poor. She had an...

And it started on the Friday night, went into the hospital on the Friday night, they said I wasn't dilating enough, sent me home. Went back in on the Saturday, that was in the early hours of Friday morning, Saturday, early Saturday. They broke my waters and then I eventually had, at 4 o'clock on the Sunday I had an emergency section again. But in the meantime I'd had, I'd had a failed ventouse, a failed suction and a failed manual and the worst thing about it was that I was actually booked in for an elective section on the Monday, so why didn't they just give me a section? But the actual surgeon did not speak English so I didn't know what he was saying. I'd had 3 lots of diamorphine over the 3 days, I'd had gas and air, pethidine, so I was quite, you know, away with the fairies.

But he didn't speak English so he just kept indicating that I had to point at something and it was a, my Mum was with me and she took the piece of paper off me and she read it and it was a consent form that if anything was to happen, the hospital wasn't under any obligation, blah, blah, blah, blah. And eventually I sort of, I think I did scribble my name somewhere but I can't, you know, couldn't tell you what it was. And then I remember being in the theatre and he said - I remember screaming or something, and I remember my husband appearing next to me and the doctor saying, telling them, indicating to the midwife to tell the midwife to tell him, to tell me to push, which was quite, really quite strange. And I remember him saying this to me and I just looked at him and I thought, are you kidding? Because I was really, really, by 3 days later I was absolutely shattered and eventually I ended up getting an emergency section. And he came out and he was 5lbs 12 and he had to go into special care because he was that stressed through the labour. And out of the whole thing, he ended up having a hernia operation when he was 3 months old because he ripped his stomach lining and got a hernia from his stomach down to his testicles. So it was quite a, my second was quite a, horrendous for the two of us, really.

Her husband could not find out what was happening and was afraid she might die. They decided not...

Her husband could not find out what was happening and was afraid she might die. They decided not...

Was your husband trying to sort of talk to them or get them to do anything?

Yeah, yeah, he was, he kept asking them, you know, what was going on, why was it taking so long, why was I so drugged up? Because I really was a lot of the time drugged up. But he just kept saying that he got no answers, he just really thought that I was going to die, because no-one ever actually explained to him. And it was only when, that, when I, obviously had had him and the paediatrician came out and said to my husband, “Oh, you've got a boy.” And he said, “Oh, that's fine, but what about my wife?” You know, and she went, “Oh, she'll be fine.” But that was the first time he knew that I would be okay, after I'd had him, and so for a day and a half he actually didn't know what was happening to me. So that was quite scary for him, it was, because, as I said to you, there's a lot I can't remember so it, it doesn't seem that scary to me. But obviously to him, it definitely was, because, as I say, 2 weeks later he went and booked himself in for the snip. And that was it, no more children.

During her first labour it was discovered the baby was breech. She was advised her pelvis was too...

During her first labour it was discovered the baby was breech. She was advised her pelvis was too...

I went in on the Monday and I had to have a heart trace of the baby, and they said, “Oh, can you go up to the delivery suite, please?” So I went up to the delivery suite and I went up there, I stayed there until 5 o'clock in the morning and then they said, “Oh, it's fine, you know, you haven't started your labour, so we'll keep you in.” Sent my husband home at 5 o'clock in the morning and then he came to pick me up the next day. And then they told me to come back on the Wednesday for another heart trace; came back on the Wednesday, they sent me back up to delivery and then they then started me off because - which I didn't know at the time, I only knew when I was 8cms dilated - that the baby had been in distress on the Monday and on the Wednesday. And then when I was 8cms dilated they realised that my daughter was coming out bum first, breech, double breech instead of her head, obviously. The surgeon came in to see me, asked me what size shoe I was, so..

Shoe, because apparently your shoe size is the size of your pelvis.

Yes. And because I was only size 3, anyone who's a size 5 and above could bring a breech baby. Anyone who's below has to have a section and I was a, only a 3, a size 3, so I've only got little feet. And I went in, I got, he done like a scan and showed me, you know, that it was bum and everything. But she was breech at 5 months and I did try to tell them quite a few times that she hadn't turned round but, you know, according to the midwife and everyone else she had, you know, but she didn't. I went in, I had an epidural, which was fine, because I was sitting talking to my husband while I was getting it done. It was quite strange, it quite surreal, actually, lying there talking to my husband while, you know, obviously they'd cut me open and what have you and then woke up in recovery. I was okay the next day, I wasn't too bad, but it was, she was, she was great and I was great. We went home 3 days later, the midwife came out to visit us, took the stitches out after so many days and she was perfectly fine.

She chose to bottle feed both her babies, but now wished she had been given more information and...

She chose to bottle feed both her babies, but now wished she had been given more information and...

Why did you decide to bottle-feed rather than breastfeed?

I did with both of my children because, I don't know, I think probably because of my mum. Probably because she bottle-fed all of us and I think you sort of tend to go for, for what your mum does, basically. If, because, because I do quite a lot of stuff for SureStart now, if I'd have known what I know, if I'd known then what I know now then I probably would have breastfed, but I didn't, so.

And did nobody ever give you, offer you any information about breastfeeding?

No, what they said was, the first interview that you get when you go in when you are, the 12 week, you know the 3 months and you get your first scan and you have all your bloods done and everything like that, that was the only, ever time anyone asked me, was I bottle or breastfeeding? And because I said, “Bottle,” she said, “Okay,” and that was it. Nobody ever asked me again, did I want to change my mind and breastfeed? Nothing.

If you reflect back now, I mean as you say, knowing what you know now, do you wish that somebody had sort of had a conversation with you and at least offered you the information?

Yeah, I do. I wish somebody had just sat down and given me the facts and the figures, and shown me that it's, it's easy. Because it didn't look easy and no-one ever explained it to me, so I just never did it, but I would now because I know a lot more information about it. I know the benefits of it which I didn't then, so no, nobody ever, as soon as I said, “I'll bottle-feed,” that was it.

Do you have a sense of why they just left it at that? I mean, do you think it was because they didn't want to pressure you or because they just were..?

I just think they couldn't be bothered. If said I would bottle, that was it. If you said you were breast, you'd probably got a lot more support. If I'd, I get the feeling that if I'd have said, “Oh, I'm going to breastfeed,” then they'd have given me the in depth information about it, but because I said I was going to bottle, that was the last time anyone ever mentioned it to me. And when I had my children the first thing they did was to come in and put bottles down on the table, so that was it, no-one ever spoke to me about it.