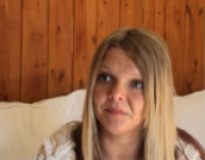 Age at interview: 3
Brief Outline: Lee was diagnosed with Wolff-Parkinson-White Syndrome. Treatment: Flecainide up until 14 months old. Possibility of radio frequency ablation when Lee is older (age 10 plus). Current medication: none.
Background: Diagnosed at 14 days old. Parents' marital status: separated. Occupation: Mother-Civil Servant, Father-Painter & Decorator. Other children: 4 older children (2 were diagnosed with a heart murmur). The family do not live very close to a specialist hospital.

She followed her gut instinct that her baby's symptoms were serious and this saved her baby's life.

She followed her gut instinct that her baby's symptoms were serious and this saved her baby's life.

View topic summary
SHOW TEXT VERSION
PRINT TRANSCRIPT
Then when he was 11 days old, I was breast-feeding at the time, and he didn't want to feed at all and when he did try and feed he was gasping for breath.  He was quite pallid, grey in colour, had a blue tinge around his mouth and was breathing quite fast. So I took him to the primary care centre which is a sort of out-of-hours doctors at the hospital because our GP doesn't visit. And they said 'oh he's just got a bit of a cold' and you know, that was it really, just give him some Calpol use Carvol on his bed-sheets and that was it. The next morning he still hadn't drunk anything, I was concerned that he may become dehydrated, so I managed to get an emergency appointment at my GP's surgery. I saw the doctor and she felt that he probably just had a cold. And I said 'well aren't you concerned about his colour, appearance and the fact that he was breathing quite fast'. And she said 'well no, he's just, you know, he's got a cold' and then she told me to go home and get some sleep.

So I actually went out with my parents that day for lunch, went back to their house and tried to feed him again and he was still the same. But he was very sort of limp, really, just quite drowsy and when he did cry he sounded like he was in, not in pain but I was concerned that there was something wrong with him because it wasn't just a 'I want a feed' sort of cry. So I actually got him home, I phoned the midwife, although he'd been discharged, and told her about the symptoms. And that I was concerned that he could become dehydrated and I felt that the doctor had not checked him over properly in the fact that she didn't listen to him with a stethoscope or anything like that. So she came round with a colleague, took his pulse, his resps and obviously she could see his chest falling and rising quite quickly and told me to get him to hospital straight away, which I did.

Yes, had I been a first time Mum I would have taken everything the doctor said as gospel. And I probably wouldn't have rung the midwife and if I hadn't have done that I would have put him down in his pram to make tea for the other children and gone back to him, and he wouldn't have been there, he would have been dead.  I was told that at the hospital so I sent my midwife a large bunch of flowers and a box of chocolates to thank her.

You had been to the GP first?

I had seen 2 GPs; one at the Primary Care Centre at the hospital and then my GP the next day.  I was quite angry with them because I think they thought I was just tired and a bit neurotic but I wasn't.  I knew that there was something wrong with him.  I've never seen it with any of my other children and it was just my gut instinct; I knew there was something very wrong with him.

Explains what she told her 3 year old son about his Wolff-Parkinson-White Syndrome.

Explains what she told her 3 year old son about his Wolff-Parkinson-White Syndrome.

View topic summary
SHOW TEXT VERSION
PRINT TRANSCRIPT
Well, it's just really difficult to explain to a 3 year old because although he's really bright he can't grasp that there is something wrong with the heart because they can't see the heart. I have shown him some books that I got for the older children for the facts of life, etc and it shows you where your heart is in your body. But, you know, he looks at it for a couple of seconds and just goes off and plays with his cars or whatever. Oh he understands that he's got a problem with asthma because he's got to have his inhalers with his bubble. But he doesn't understand about his heart because he doesn't have any medication for that now and even if he did he couldn't connect the two because, like I say, he can't, he can't see it. All I have said is that, when he had his last episode, 'you know when you said that your chest was banging' and he said 'yes' and I said 'that's your heart being naughty, it was trying to sort of run away' and he said 'oh right' and that was it. He just can't understand it, but ignorance is bliss as far as I'm concerned.

I mean, do you have any ideas about how as he gets a bit older, you might talk to him about it?

Yes, when he's a bit older and I feel that he can understand. We've got a photograph of him in intensive care; they always take one for you. And he said 'is that me, is that me?' because his sister had told him that it was him and I said 'yes'. 'Why have I got them all over me?' and I said 'oh you weren't very well because your heart wasn't working properly but it is now' but he just said 'oh' and turned to the next page. So when he's older I will explain that, in very simple terms, that he has got a bit extra on his heart and that sometimes it's naughty and beats a bit faster than it should. But the school are well aware of it anyway, he goes to pre-school there so they'd pick up on any problems. And obviously as he gets older he'll understand more.

Describes episodes of tachycardia her son experienced caused by his Wolff-Parkinson-White Syndrome.

Describes episodes of tachycardia her son experienced caused by his Wolff-Parkinson-White Syndrome.

He becomes really lethargic, he breathes really fast and he'll say 'my chest, my chest is banging' and he'll say put my hand on his chest. And he is just really lethargic, he can't sort of move off the settee or whatever. It is really strange, but I've read up about it and apparently usually Wolff-Parkinson-White it is not uncommon, but it mainly presents itself when you are an adult if you do lots of sport of you have lots of caffeine. You know you can end up in hospital and then they'll tell you, give you the diagnosis. What they often, what a lot of babies do and children is they'll breathe in and close the mouth and make a grunting noise when they are breathing out through their nose. And that is your body's sort of natural way of trying to slow the heart rate down and they can flip out of it themselves doing that and by lying on their front. So that is why he used to grunt in the first few days. Because the doctor said it was because he had a cold and it was all the mucus but the hospital later said it could of, that's just their sort of natural reaction to it.

Tell me a bit more these episodes when he has them, how long do they last?

Well, the last one lasted about 2 hours and then that was it. But obviously the first one had been going on for days, 2 or 3 days. And generally, yes it's probably about an hour and a half, 2 hours and I have never had to sort of rush him up to the hospital for them to give him Ademadine, I think is what they would give them, to bring it down to a normal rate. So we have been quite fortunate.

What sort of circumstances are you looking out for, would it still be the very raised pulse?

Yeah, like I say, he'd look quite grey in appearance and he would be breathing really fast but obviously I know what his heart rate should be so if I just take his pulse then I'll know how he is.