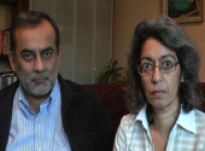 Age at interview: 53
Brief Outline: Celia's husband, Deepak, had kidney failure in his early 30s and a kidney transplant in 1995, aged 35. Caring for him before he had a transplant was difficult because his diet was restrictive, he was often exhausted, and they had two small children.
Background: Celia is a full time mother and housewife. She has two adult children. Ethnic background / nationality' South Asian.

Celia’s husband, Deepak, has a family history of kidney disease. His grandmother and mother both died of kidney disease and his sister was also later diagnosed with it. When she was told by doctors that she would need a transplant, Deepak offered to donate his own kidney and was given various tests. A re-test three months and then six months after the initial tests showed that he had early stage kidney disease himself. Doctors recommended that he make changes to his diet, including reducing the amount of protein and potassium he ate. This was shocking news to both Deepak and Celia, who had two young children at the time.

As Deepak’s kidney disease progressed, Celia said he’d often feel frustrated with his restrictive diet. Eating out was particularly difficult. Celia and Deepak had always wanted to have more children but now agreed not to, a very difficult decision to make and accept.

As time went on, Celia said Deepak became more and more tired and this affected their marriage. She said, ‘One of the things they don’t talk about is that kidney disease affects your libido, which means that, as a woman and as a wife, it was very hard. And I couldn’t tell him anything because I knew he was struggling as well. So we’d get into bed at night and he’d just fall asleep. And so our late night chats, sex was practically gone. But late night chats, early morning chats, last thing at night cuddles, that was gone too. Because he was just asleep the whole time. And I think more and more and more tired as time went on, and that was hard.’

Celia took on more of the roles that, previously, Deepak had taken care of but found it difficult to talk to him about this because it would upset him. She found it particularly difficult because, at the time, she felt there was no one she could talk to. Although she had practical support from family, she felt she had little moral support. As his condition worsened, Celia said the toxins building up in Deepak’s body caused an unpleasant smell. He was increasingly tired but determined to go on and continued working. Celia did not know how long Deepak’s health would be like this and he had started fainting occasionally, which was very worrying. She turned to her faith for support.

Sooner than they expected, doctors told Deepak that he would need dialysis and to go on the kidney transplant waiting list. They agreed as a family that peritoneal dialysis would be best as it would enable Deepak to continue spending time with their children. Peritoneal dialysis involves using the patient's peritoneum in the stomach as a membrane across which fluids and dissolved substances are exchanged from the blood. Fluid is introduced through a permanent tube in the stomach and flushed out either every night while the patient sleeps or via regular exchanges throughout the day. Its main advantage is that the patient can have treatment without visiting the hospital.

Celia helped with some of the practical elements of peritoneal dialysis, including helping Deepak with his bag exchanges and injections. Their weekend plans often revolved around these exchanges, which needed to be done every four hours.

Deepak was on the transplant waiting list and they were told that it could be a long wait. However, he had dialysis for only two weeks before receiving a phone call to have his transplant.

After surgery, the first ten days were the most difficult. Celia said, ‘The transplant surgeon took the catheter out which apparently, or we’ve been told, is not normal. But this guy was convinced that the kidney would work and it would all be fine, so he took the catheter out. And then the kidney went to sleep. And it slept for about ten days. And I think that must have been the hardest ten days of our lives. We’d had all this hope that he was going to get this kidney, and it was all going to be wow, he was going to be well. And then he wasn’t. And there was a point after about seven days where he needed dialysis because the kidney wasn’t working. But they’d taken the catheter out and the hospital were saying the build up of toxins can make, can kick-start the kidney, the new kidney to work. But that wasn’t happening. And you know what is going on? Is it going to get better? Is he not? What is happening?’

Celia would have liked a lot more information during this time and, later, made an appointment with a specialist, who reassured her that the new kidney would work but he did not know how long this could take. The kidney did indeed start to work and Deepak’s health began to improve. Immediately after the transplant, he was given daily check-ups and now has follow-up appointments every four months. His health has improved dramatically since the transplant and he has a lot more energy. Fifteen years on, they are able to travel, eat out and spend quality time as a family. Celia advises carers to get as much support and information as they can.

Celia is married to Deepak - Interview 12.

It was very difficult for Celia when her husband had kidney disease. He did not have much energy...

It was very difficult for Celia when her husband had kidney disease. He did not have much energy...

As the disease progressed, he [husband] got more and more tired. That was quite hard and one of the things they don’t talk about is that kidney disease affects your libido, which means that, as a woman and as a wife, it was very hard. And I couldn’t tell him anything because I knew he was struggling as well.

So we’d get into bed at night and he’d just fall asleep. And so our late night chats, sex particularly was practically gone. But late night chats, early morning chats just you know, last thing at night cuddles, that was gone too. Because he was just asleep the whole time. And I think more and more and more tired as time went on, and that was hard.

As we got closer to him needing dialysis, he was determined to keep going. Determined to do all the things that he should be doing, and he wanted to be doing as a husband and father and as the head of the family. But gradually couldn’t. And I found myself having to take on those roles but not talk about it. Because if I talked about it he’d get upset, realising that he ought to be doing this thing, or wanted to be doing it, and couldn’t because, as the toxins built up, it affected his thinking and everything.

So I had to start taking responsibility for things like checking the bills were paid, whereas he’d always done it. And I couldn’t say to him, “Have you paid the bills?” I just had to sort of surreptitiously go and double check that everything was in order. And if it wasn’t just do it myself. Which again was very hard because, as a couple in our marriage, we’d always talked about things. And I found there were more and more things that, if I talked about, he just got upset. So that was difficult too.

One of the other things I noticed, which again nobody talks about, or I’ve not heard people talk about, is that as the kidney disease progressed, as he got closer and closer to needing dialysis, he smelt. And, again, it’s not something you want to say, “Well my husband smells.”

But it was a very distinctive smell, and I guess it’s just the toxins building up that causes it. There’s no way of releasing them. But the smell became pervasive, on his clothes, in our bedroom. It was just everywhere. And I found that very, very, very hard. Because I felt he wasn’t my husband anymore almost. He was changing in some way that was completely outside my control.

Celia said her husband wouldnt be alive if it wasnt for organ donation. She is in favour of the...

Celia said her husband wouldnt be alive if it wasnt for organ donation. She is in favour of the...

My husband wouldn’t be here doing the things that he’s doing if we hadn’t had that transplant. I’m on the transplant list and I would say sign up. And I’m hoping the government go in for the opt-out, which means everybody has to be on the register unless they choose not to. Because most people just never get round to it. So isn’t it better they never get round to saying, “No, don’t transplant my organs.” And help lots of people, rather than never get round to helping anybody. And we have thousands of people waiting.

And actually for the NHS, if people are worried about funding, it’s more expensive to have somebody on dialysis with kidney failure than it is to give them a transplant. So why are we wasting NHS valuable resources? So just get on and register and do it is what I would say.