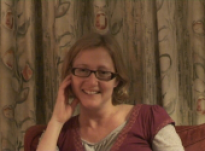 Age at interview: 35
Brief Outline: Katherine had a premature menopause following a diagnosis of Hodgkin's disease and treatment with chemotherapy and radiotherapy. She was prescribed the pill for many years before starting HRT. She finds support in an early menopause group.
Background: Katherine is a TV production manager. She is single with no children. She had an early menopause at age 21 following treatment for cancer. Ethnic background/nationality' White British.

At the age of 20, Katherine was diagnosed with Hodgkin’s disease, a cancer of the lymph nodes. A few months after finishing chemotherapy and radiotherapy treatment she began ‘getting lots of hot flushes and feeling really strange’ as well as being emotional, having night sweats and skin rashes. Fearing that the cancer had returned, she was somewhat relieved when, following blood tests, her GP confirmed that she was experiencing a premature menopause; a side effect of her treatment. Thinking that the diagnosis might reverse itself with time, Katherine’s GP prescribed the contraceptive pill.

In the years which followed, Katherine continued to take the pill. Yet while this relieved her symptoms, she received little support or advice about premature menopause. Despite mentioning it to a number of doctors, including her cancer specialist, she felt that ‘nobody understood or didn’t think it really was very important’. Finally referred to a menopause clinic twelve years later, Katherine felt reassured that she was ‘in the right place and talking to people who have the right experience’.

Following tests at the clinic, Katherine was put on HRT which has given her ‘a lot more energy’. Keen to avoid the risk of osteoporosis associated with premature menopause, she intends to stay on HRT indefinitely. She has been particularly impressed by the support offered by the early menopause group at the clinic. Group meetings, run by a specialist menopause nurse, have provided a valuable forum for the exchange of information and an opportunity for Katherine to meet other women going through a premature menopause and to share experiences.

From a physical point of view, the menopause has not been ‘a big deal’ for Katherine compared to having cancer. She is thankful just to be alive and healthy. What it does mean, however, is not being able to have children. This has become more poignant in recent years as her friends have started having children. She is hopeful, however, that through egg donation, adoption or fostering she may be able to become a mother in the future.

Katherine was interviewed for Healthtalkonline in November 2009.

I’ve always been more focussed on my Hodgkin’s actually so it’s probably only really since my friends have started having kids and things that I’ve started thinking about it.

It probably seems more relevant now. I mean before I was just glad and I mean my main thing is not to have had the Hodgkin’s back really. So that’s the key. And if a side effect of that is to have premature menopause and then so be it. So I mean I haven’t dwelt too much on it because there’s no point really.

You mentioned earlier egg donation. Some of things you’ve talked about in the menopause support group. How do you feel about that?

I feel really hopeful about that. Yeah. I mean I kind of knew there was probably some kind of IVF and the gynaecologist I saw when I was about 30 did say there were treatment programmes but having gone to the premature menopause group and talked to [name] and the people there, the fact that I could get down on a list and be a good candidate for it and the fact that I still have periods and so things are kind of working, it does make me feel hopeful about that. And I’ve also thought about adoption and fostering and other options like that so there are options.

Katherine found an early menopause group gave her much needed support and the opportunity to talk...

Katherine found an early menopause group gave her much needed support and the opportunity to talk...

I think it was good just to meet some other people who’d had it because it isn’t something that I’ve really spent a lot of time finding things out or dwelling or even really talking about. A lot of people don’t know I have it and it’s not something I tell many people. So it’s a bit of a part of my life that I don’t really give much time to. So I think it was nice going to the support group because it was giving it that time and that space to talk about it. And I think that’s what the other girls felt as well that it was a healthy thing.

How does it work?

Well, [name] did a good job in terms of she divided it. She did six or seven sessions and divided it into what we’d talk about. So one session was diet and exercise. One was about how you could get egg donations and how you could have children. Another one was about counselling. I can’t remember what the other four were. I only made about three because I had to drive down from London. And they were on Mondays so and I think that gave it a bit of a structure to hang it on and she would have an idea about what she wanted to talk about and she’d bring some leaflets and some books. But it was very much also then open to people chatting so I think it was just providing a forum for people to do that. And it was quite a loosely arranged relaxed session.

I would ask, well, I think to get to go and see a proper specialist who specialises in early menopause, not just a GP and not just a gynaecologist, someone who really knows what they’re talking about. And there’s I don’t know where else they are in England, I mean there is the one at the [hospital]. I don’t know what other ones they have and how many there are but I think it’s really important to really get the right advice. And make sure you’re on the right treatment because I think I was on the pill for a long time, which was probably okay for a bit but it certainly wasn’t the last couple of years, it wasn’t doing the right job. And to maybe get the relevant blood tests to make sure that your levels are right for what you’ve got and to go for the odd bone scan just to make sure that your bones are strong.

Well, I’m 35 now and when I was 20 I got diagnosed with Hodgkin’s disease which is cancer of the lymph glands and had chemotherapy and radiotherapy for that. And then one of the side-effects was the treatment put me into a premature menopause. So shortly after getting treated, maybe a couple of months or three months, no actually about two months after my radiotherapy finished I got menopausal symptoms. Which I didn’t realise were menopausal symptoms at the time. I thought I had the Hodgkin’s back again because I hadn’t known that that was a side-effect. So I was getting lots of hot flushes and just feeling really strange and slightly dry skin and generally feeling really uncomfortable. I just wasn’t sure what that was and then when I went to the doctor and they ran some tests they realised it was premature menopause. So I’ve really just been I was on the pill for quite a few years for that and then switched over to HRT about two years ago, three years ago which was much better than the pill had been.